Get Out: Small Town Trails Development

Before we started riding several years ago, I had spent virtually every weekend at the cabin I'd had built in 1990 on the Little Red River near Heber Springs. Other than weekends spent boating in the Ozarks or traveling on vacation to whitewater destinations in the East or West, my Friday commute included a drive to Heber. Then came my accidental addiction to road bikes and suddenly my priorities had changed. Diane also got the bug, but my compulsions seem to run a bit deeper and I was always looking for the next ride. Saturday morning group rides became more important than chasing trout, building fences, or tending a distant garden, so our weekend routine became sporadic and bike driven. When I built the Heber place, one of my goals was to make it easy to maintain, as I had observed neighbors who seemed to have lost sight of the pleasures of a place on the river and only showed up to do what work needed to be done. While we always have projects, they are seldom so pressing as to require  a trip for the purpose, and we still reap plenty of enjoyment from our getaway. Since Heber Springs is a small town surrounded by rural two-lane roads, as my appetite for the fast pack experience waned, I had expected it to be easy to plot out some great road rides in the area, so we started scouting. With help from a friend experienced in riding in Cleburne County, we rode one loop that was 70% remote roads and great scenery, 30% no-shoulder Highway 25, shared with towed party barges, Wal-Mart semis, and retirees pulling outsized travel trailers behind vehicles with giant extended rear-view mirrors. After braving the gauntlet a few times to get to the pleasure of Dry Mountain Road, we gave it up and I went back to the maps in search of better opportunities. I found it in the form of a 35 to 50 mile loop to the town of Pangburn, with the 50-mile option including a side loop to the metropolises of Dewey and Clay. The roads were good, the climbs moderate, and there are a couple of really nice, long descents along the way as the road drops to the river valley from the surrounding hills. Nice. That is, until the natural gas drilling boom hit the county and suddenly even the most remote roads seemed to be crawling with trucks piloted by drivers getting paid by the load and in a hurry. I'm not saying that we won't ride at Heber any more; my point is that many rural areas are not conducive to great riding. I find it ironic that I can more easily strike out from home in North Little Rock to enjoy the open road than I can from our place 8 miles outside of Heber Springs. Even more ironic is that I'm unaware of any place at all to get on a suitable trail for mountain bikes around Heber. We can brave the roads, but we can't ride trails that don't exist. With Greers Ferry Lake being a Mecca for outdoor recreation, I'm a little taken aback that most of the recreation opportunities in the area seem to require a motor in order to enjoy the natural beauty. That situation is not unique to Heber Springs, as many riders who live outside of the Little Rock area regularly drive to central Arkansas to ride the River Trail system, the surrounding roads, or to get on some of the first-rate single track available to us here. There are glimmers of hope on the horizon for some rural riders, though, in the form of a couple of projects that are either proposed or ready to go in the Heber Springs and Cabot areas.

Greers Ferry Lake Trails Council
While my dreams of riding along quiet country roads free of roaring tank trucks full of toxic drilling fluids may go unfulfilled for a while, there is an ongoing effort by the Greers Ferry Trails Council to develop a multiuse trail system in the Heber Springs area. 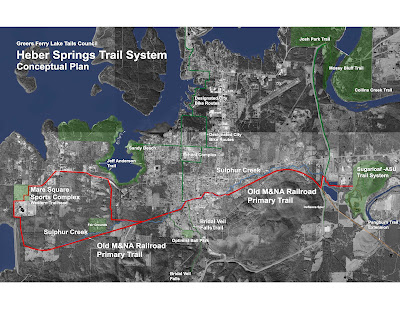 Currently being driven by Frank Wimberley, the council has obtained some grant money and has developed a concept plan to include an old narrow gauge rail right-of-way and some property already under city control. Much of the rail bed has apparently reverted to private ownership and the council is working to obtain  rights-of-way in some areas, while work is underway on others.

Take a look at the maps and plans and, especially if you spend any time around Heber Springs, take the trail use survey.
I've got slightly selfish motives for touting this project, as I'd really like to feel that I could cruise around town and run my errands on my bike. More importantly, I've got a 12-year-old nephew living out on the river and I'd love for him to be able to safely ride his bike to school, the lake, and wherever else a capable young guy would care to ride.

Cabot Mountain Bike Trail
I initially came across information on this development compliments of the Arkansas Cycling and Fitness website. When Danny Hackworth noticed that Cabot was building "yet another skate park", he contacted Larry Tarrant of Cabot Parks and Recreation and asked about the possibility of developing mountain bike trails and suggested an area that he was familiar with near the Cabot BMX track. Tarrant gave Danny a go-ahead to go to work on a trail system on the city property, so Travis, who had no trail building experience, contacted the folks at ACF.
"I hit up the guys at ACF and they jumped in head first and started spreading the word. Travis and Efren have been spending half of their only weekend day off and marking out the trials. ( http://www.mapmyride.com/routes/view/68873680
I know it looks crazy but there is a method to the madness)"

Danny is planning a work day soon and I'll post the date here. The initial trail layout involves a couple of miles, which may be expanded to 8-10 miles over time, depending on use and other plans for the property that may arise. If you're interested in helping in the future, contact Danny at sleeperagent2@gmail.com.

I'm obviously delighted to see both of these projects moving forward. While there is a lot of discussion and some action on alternative transportation and outdoor recreation opportunities in our cities, small towns and rural areas are largely ignored in the conversation. The result is that residents are totally motor vehicle dependent for transportation and self-powered recreational areas are nonexistent. Few kids walk or ride anywhere and the result can be seen with a simple trip to any small town Wal-Mart. There are more morbidly obese than fit children and few adults are leading by example. Busy highways and streets with no sidewalks serve to trap many kids at home, where they can usually find a Game Station and a bag of chips to entertain them. hese projects usually involve cooperation between government and motivated volunteers. The politicians on the right often call these efforts a waste of taxpayer dollars, but I'd much rather pay for bike trails now than for diabetes and cardiac care for a generation of fat kids. Thanks to folks like Frank and Danny for their efforts.