Along The Trail: Picture Book

There is always something going on along the Arkansas River Trail, and it is often interesting, educational, comical, beautiful, or just plain perplexing. Here's a picture-book of such things from a couple of loops around town. There are enough words thrown in there for me to call it an article. 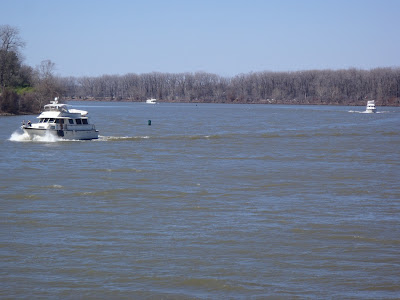 This line of cruisers stretched around the bend on Sunday. 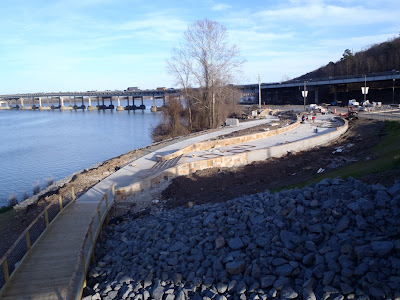 The plaza at the foot of the Two Rivers Bridge is shaping up. I'm curious about the plan for bathrooms and water availability. 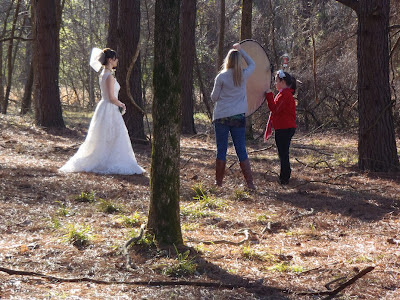 It's really not unusual to see brides engaged in photo sessions along the trail. This glowing bride was at Two Rivers Park near the bridge. 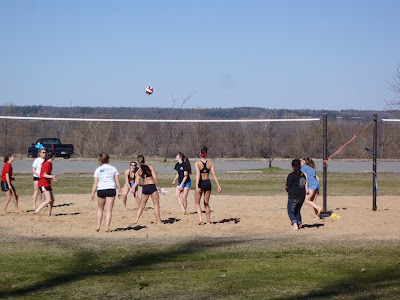 The brutal February weather continued to chill Little Rock volleyball players right out of their pants.

Potential Conflict?
While out riding on Sunday I was reminded of a question/problem presented by frequent ride buddy Sam Ledbetter and also by a thoughtful reader. That is, how will we manage the merging traffic at the junction of the east and west ramps of the Big Dam Bridge? I'm thinking that if it becomes a point of conflict, I'll probably try going down the west and up the east. That way I can stay to the right on the bridge and go on my way to clutter up traffic between the ramps if I happen to need to go the other way. It will get worked out, but there will need to be some protocol for safety's sake. 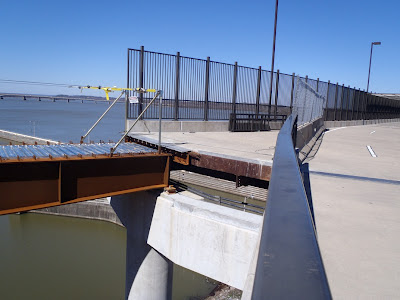 Everybody will need to mind their manners and be alert at the coming BDB junction.

MPH
I almost hesitate to mention this, but Drew Moffitt informs me that the radar speed-indicating sign on the BDB is in operation. I hesitate for fear that some reader will get the idea to see how fast they can go, but, of course, everybody who has seen the sign has already had that idea. I've got a great deal of faith in the good sense of area riders so that I'm certain that there will be no attemps to set and then break personal speed records. I'm equally certain that there will be no sharing of personal records resulting in others attempting to top said record. Hopefully, the game won't be popular for long, but somebody will always want to take a shot at the record that won't be established, become legendary and always be spoken of in low voices on long rides. Everybody is too responsible to speed on the BDB; however, I'm going to stick to my plan of descending the west ramp when it opens in order to avoid temptation and speedsters. 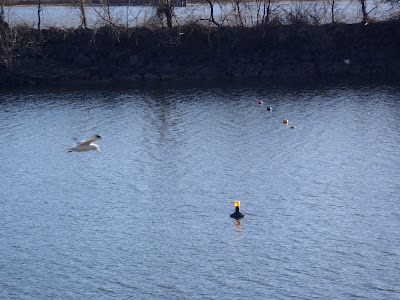 At Victory Lake, it's geese beware! I think these bouys have strobes and noise makers to disrupt the sleep of groggy geese. Nonlethal methods, including the use of dogs, have moved most of the geese out of the parks for now.

The road climb up to Fort Roots from River Road and Paul Duke Drive is being repaved and was closed to traffic as of Saturday. The pavement was in bad repair and some new asphalt will be appreciated. 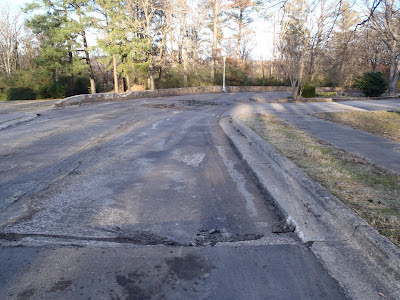 This descent will be sweet with fresh pavement, but the popular climb up Fort Roots is closed for now. Asphalt paving doesn't take long and it should be better than ever.

Fort Roots as an institution has had a mixed history with cyclists. A near-ban took place a few years ago, so always bring your best manners if you enter the gates.

It's been crazy warm and that  looks to continue as the days get longer. There are a lot of riders out getting in some early season miles and there are already many, many folks out strolling around the bridges and parks, so it pays to adjust your speed to the conditions.

So JBar should we post our speed records on the BDB here? Is there a way to upload our pictures we take of our speed while setting said records?

BDB Fixed Gear with no brakes Sprint competition Saturday at noon! or whenever there's the most foot traffic! Highest Speed wins a new Chromebag full of PBR!!! (i'm just kidding)I save my attacks for Wye mountain.

So if there's a speed radar on the BDB for us bikers, when will there be a dog crap radar for those inconsiderate dog owners who are going to ruin it for all the dog lovers out there?

No, there will be no posting of speed records here. I'm serious. Really, I don't approve.
And, yes, the dumpin' dogs are back. Last year, Nancy Elliott asked dog walkers to pick up after their pets and to sign a petition to prevent a ban of dogs on the bridge. I think she had a real impact. Nancy is walking her dog elsewhere now, but perhaps some other responsible dog owners will take it upon themselves to educate the masses.It doesn't take much dog shit to be too much.