Well, it was Veterans Day, I had an invitation from Bryan Shipman to join a bunch National Guard folks on a ride to mark the occasion, and it was a beautiful day, so I took a brunch hour today and joined them. The National Guard Cyclists, an unofficial recreational organization of guardsmen, has taken root in several areas across the country and this was the inaugural event for the Arkansas chapter. 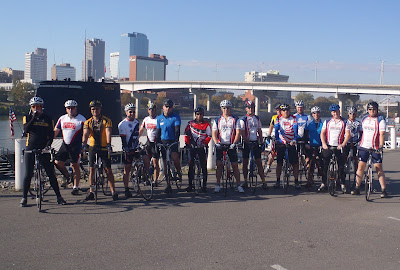 I think that Bryan accounted for 24 riders, most of whom are in this photo in front of the USS Razorback.
When I was coming of age in the Vietnam Era, the Guard was thought of as a safe place to avoid combat duty. It was difficult to get into many companies without connections﻿. Some did see combat, many of the units that were called up saw duty as
ready reserve on bases in the U.S.. That's not the case today, and many of these soldiers have been deployed to Iraq and elsewhere. 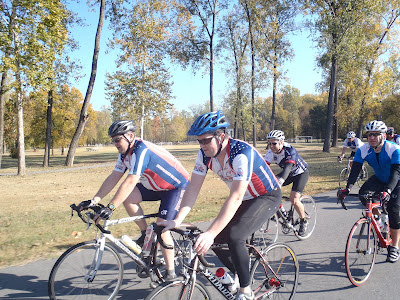 Andreas deKunffy and Bryan Shipman followed by Dan Lysk of Arkansas Cycling and Fitness and Marcus Pierce.
The National Guard Cyclists are drawn together by their love of the bike and the common bond of service. Their numbers are already growing and as a group they will be a presence at events like the BDB100, likely making for a very positive impression of the National Guard while promoting fitness among their peers. I appreciated the opportunity to ride with them on Veterans Day, though the Siren song of work forced me to cut my ride short.
Posted by JBar at 8:36 PM

what a great way to enjoy and to support each other.