On Sunday, November 28, Arkansas Cycling and Fitness sponsored the Turkey Burn Cyclocross Race at Little Rock's Kanis Park. The race was a success, attracting about 30 entrants, along with a large contingent of family members and observers. Cyclocross bikes can be loosely described as fat-tire road bikes, as riders have to deal with mud, sand, and man-made obstacles that are designed to require racers to dismount and shoulder their bike on the run to climb, jump or step over barriers. 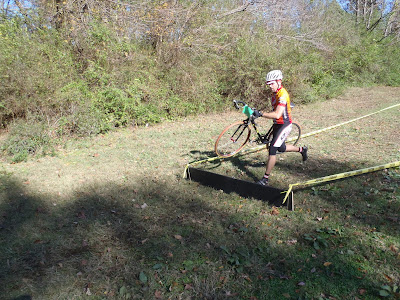 The barriers are usually approached on the run. Dismounts and mounts are practiced and can make or break a rider's chances for success. 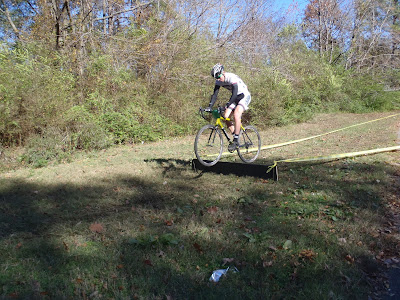 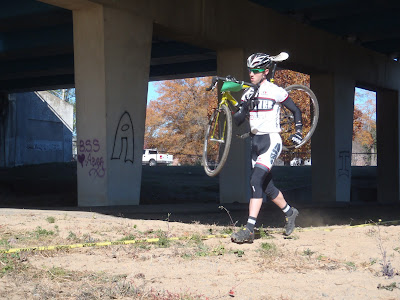 Cyclocross is about dealing with obstacles. A large sand pit under I-630 was the perfect foil for the guys who could hop barriers. I saw many riders try to ride the sand,  but all that I observed eventually gave it up and dismounted. 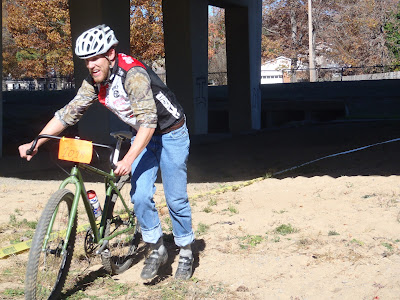 Kris French is a monster on the road, but seemed a little confused by this whole cyclocross thing. Stylish, as always, in his camos and jeans, Mr. French was good for three laps. I thought his sporting attitude and the groovy bars on this borrowed race rig would have given him an insurmountable advantage, but that was not the case. 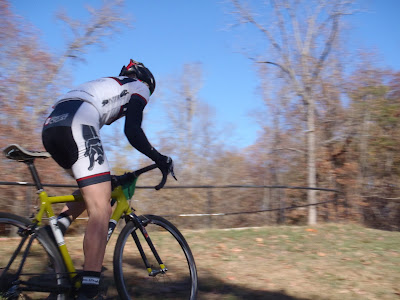 Kanis Park is pretty flat, but the AC&F boys did a good job of taking advantage of the terrain, creating some off-camber stuff around a skate park bowl. 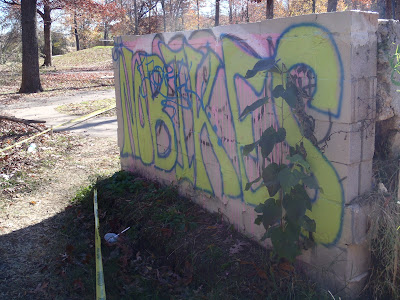 Nobody paid much attention to this tagger's message.
Cyclocross is growing across the US, giving riders some low-pressure late season competitive events and giving the rest of us a chance to get out and have some winter fun with our friends on the bike or on the sidelines.
Race results can be found here.
Up next: Klein Rots Cyclo Kruis
Posted by JBar at 6:31 PM