As you might have surmised, I've been fairly excited about events at this year's Tour de France. With all of its warts, professional bike racing is still an exciting, beautiful sport to me; however, there are still things going on locally that bear mention.

I have been involved with NLR's Bike Friendly Community Committee for some time now and Thursday night we took our committee meeting out on the streets. North Little Rock has an ambitious  bike plan and our most recent goal has been to identify some viable routes to serve as feeders to downtown/ the River Trail from various neighborhoods with an eye toward getting them officially designated and marked. The route we looked at last night would serve Levy, Park Hill and ultimately Indian Hills. The centerpiece of the route would be the rail spur that runs from Levy to Camp Robinson, running parallel to Camp Robinson for some distance then turning near  Kierre Rd before crossing Remount Rd. and entering Camp. A trail on this line would allow for the bypass of the heart of Levy, a congested retail and commuter zone that is problematic for cyclists at the best of times and near-impossible at peak traffic times. The City has been working to obtain ownership of the right-of-way and that should eventually come to pass. In the meantime, we're working with what we've got to create safe designated routes for commuters and recreational cyclists. I'm excited about what we are doing and look forward to being able to announce firm plans as they are decided upon and approved.

I was also able to get a look at the current plans for the North Little Rock end of the Clinton Park/ Rock Island Bridge development, for which construction is scheduled to get underway in August. NLR's RV park, which initially was to be a temporary use of the property, has proven to be profitable and immensely popular. It provides a rare opportunity for RV campers to be in the heart of a city, close to restaurants, museums and other urban amenities. As a result of the success of the RV park, it will be reshaped, greened up and made an integral part of the redevelopment of the area. North Little Rock's plan looks great, with the bridge ramp exiting on to access to the Harper's Loop to the east and the River Trail to the west, with a great deal of consideration being given to the needs cyclists and pedestrians.

Little to add here except that the bridge construction appears to be a little ahead of schedule. One item of interest came up in conversation with a friend who is in the structural steel business. The center section of the bridge will be a single 292 foot-long steel span. Due to its length and the inherent flexibility of steel, there will be the likelihood of significant motion on the span during windy or heavily loaded conditions, like a mass run. That may be an issue with folks who are easily made queasy, but easy access to Two Rivers Park will be well worth a moment of discomfort. 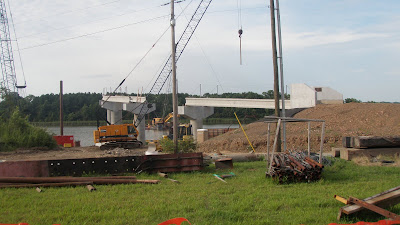 It's starting to look like a bridge!
Our Goose Problem 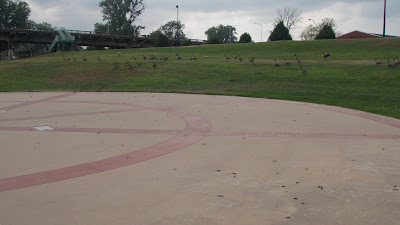 Geese and their droppings have been a problem along the River Trail for a few years. As their population has grown, so has their range. There is now a large gaggle fouling the Riverfront Park downtown, as shown in this photo from last Sunday afternoon. This spot is often used by a local boot camp as an exercise area, but I don't think anybody will want to plant their mat here. 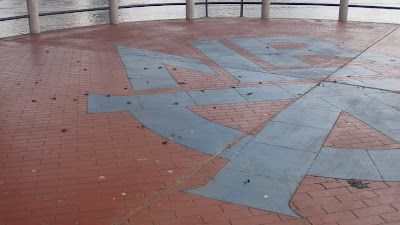 I don't think this is the kind of first impression that we want to give visitors entering our park. 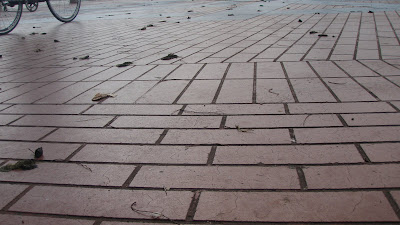 In case you've been wondering what the green slime on your tires and brakes is, wonder no more. This can't be healthy! 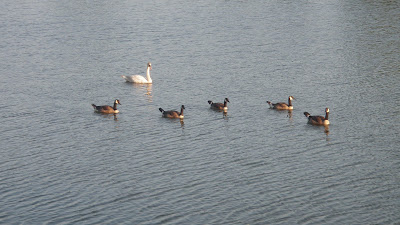 Once the flock figured out that the ugly duckling was really a beautiful swan, she was banished to live with the geese.
I have no real suggestions regarding control of the goose population, but eventually it seems it will have to be addressed. Rebsaman Golf Course has a border collie to keep them run off the course. In NLR, we have a couple of well-intentioned ladies who drag bags of feed onto the Burns Park golf course for them. Perhaps the kind ladies could be convinced to take a few hundred of them home with them, or maybe we could have an urban hunt during the holidays and distribute a big fat goose to any family expressing a need for Christmas dinner. I'll throw in the cranberry sauce.
Posted by JBar at 5:39 PM