Fireworks on the 5th of July 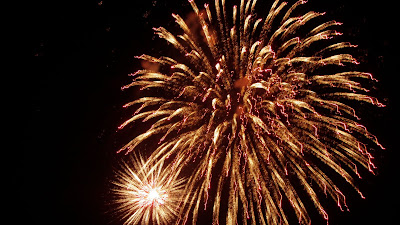 The descent of Col de Stockeu in today's Tour Stage 2.....
OK, so that's not quite true, but I couldn't find any good photos of the carnage in Belgium today. Things exploded and we continue to see a race that is wide open and unpredictable as wet, slick roads put virtually every major contender and damn near the whole peloton on the pavement. With Andy Schleck chasing back on a borrowed bike and Contador, Armstrong and the rest of the pack spread all over the road, an agreement was reached to let fallen riders catch back on and to not contest the sprint finish. The resulting win by Frenchman Sylvain Chavanel (Quick Step) puts him in the yellow jersey as riders neutralized the finish and most of the pack came in about 4 minutes back. Big losers include Dave Zabriski and Christian Vandevelde among others, who each lost about another 6 minutes, putting them out of reach for the GC in all likelihood.
It will be interesting to see who starts tomorrow, as there were some serious-looking injuries to riders like A. Schleck, who showed all signs of a broken collar bone before hopping on a teammate's bike and starting to chase, Tyler Farrar and many others.
Late update: Vandevelde is out with two broken ribs.
The guy just keeps catching bad luck and breaking bones.
http://velonews.competitor.com/2010/07/news/126109_126109
Few of the leaders were unscathed...
from:
http://www.independent.co.uk/sport/general/others/cycling-armstrong-fears-carnage-on-first-cobbled-stage-on-tour-for-six-years-2019219.html 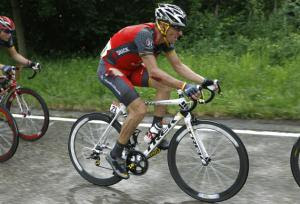