Well, the snow is finally melting and the roads are more or less clear. Whitey the Snow Spaniel has faded and run off down the gutter, though as I write, it's Sunday afternoon and our 40% chance of showers is pouring from the sky in the form of chicken feather snow flakes. Fortunately for the alert road rider, both Saturday and Sunday offered decent windows of opportunity to get in a ride. I joined friends to ride some hilly miles out west on Saturday and found myself to be in embarrassingly poor shape, stark proof that I really needed to be riding more! It was not a "wake-to-music" kind of alarm, but a harsh buzzer of the most offensive motel alarm clock variety. I did some quick calculations as I rode alone back to my car, having dropped off of the group and cut short my ride (they offered to slow the pace, but I have a hard time accepting those offers. No legs, but a small bit of pride!), and determined that I've gone though more cookies than road miles in the last couple of weeks. The feeling is somewhat like the feeling of remorse that can follow a few too many beers, except that it takes longer to work through. I've been told that I'd feel better about myself if I rode with a crowd other than a bunch of full-time-training 10-to-20-year-younger some-kind-of-racing marathon-running athlete types, but I like them in spite of their aforementioned flaws.


Whining aside, it was a beautiful day to be on the road after the snow-imposed down time of the last couple of weeks. 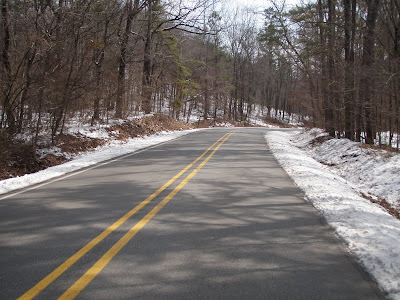 Denny Road was clear, but the woods are still full of snow.
The forecast for Sunday was for showers, so I was glad to see a sliver of blue sky as I got ready for a town ride. My plan was to go ride a few hills to begin my recovery from a slovenly few weeks. First stop, River Mountain Road, and along the way, I saw the first sign of progress on the Two Rivers Bridge in the form of a construction trailer and mail box near the location of the mainland foot of the bridge. 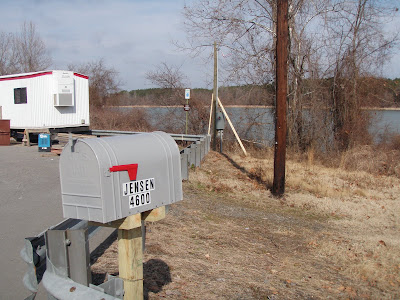 Jensen Construction will build the Two Rivers Bridge and their jobsite trailer is near where the bridge will tie into the trail. Two Rivers Park is visible across Little Maumelle River in background. The bridge will add a whole new realm of opportunities to River Trail rides. 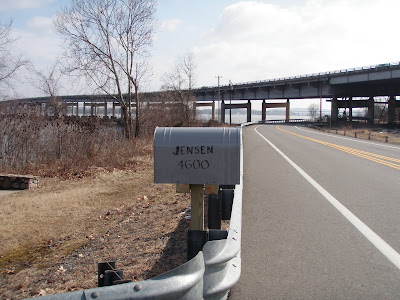 Here's a view to the east showing the proximity to I-430 and the BDB in the background.
On Sunday, the sun turned to clouds, then rain and snow, but the weather outlook is better for the next few days. Now, if I can just get a little gap on the cookies, maybe I can work my way back into the pack.
Posted by JBar at 5:41 PM