A pilot friend of mine once described a plane crash as an incident in which the pilot "ran out of airspeed, altitude and ideas, all at the same time". 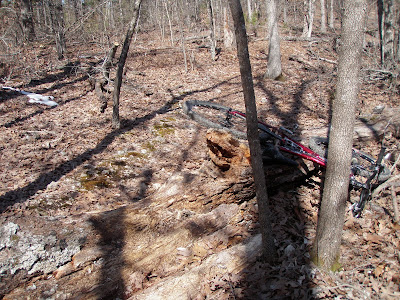 That came to mind as I failed to clear a log jump the other day on the Syllamo Trail. The photograph shows my bike's landing spot after I spiraled to earth, somehow making a 180 around the tree that is in the foreground. I was supposed to be cleanly clearing the log to the left of the tree, where the chainrings of many more capable riders have worn down the sweet spot. I noticed the jump a little late, as the woods were full of downed trees and therefore logs weren't attracting much of my attention. It was also uphill and probably bigger than anything I've attempted, and I had a moment of indecision as I quickly evaluated my situation: I was totally alone on the trail, having seen no other cars or people at any of the trailheads or anywhere along the 5 miles of access road for that matter, I only had a vague notion of where I was, I had already gone 5 miles down the wrong trail, had a business meeting involving a video shoot three hours later and 50 miles away and the area was littered with jagged branches of shattered trees, so breaking my bike would be bad and getting hurt would be very bad on many levels. I did the only rational thing and went for it, stalled out  as I failed to attack aggressively enough to climb over on my chainring ( I can't jump a line on the pavement), fell to my right from high-center on the big ring, landed on the log and rolled back over it, still clipped in and on the bars, being very aware of ducking one of those jagged branches as my head approached the ground. The result left my bike on the other side of the tree and facing in the opposite direction from my intended direction of travel. I landed hard on my shoulder but was otherwise little the worse for wear, fortunately. I was going way too slow, I can't jump for shit and I had no friggin' clue what I was going to do as I approached the log.
Bad things happen when you run out of airspeed, altitude and ideas, all at the same time.


I had read and heard good things about the Syllamo Trail system and managed to carve out a couple of hours of time from a long day of travel to grab a ride after a customer cancelled an appointment. At the direction of experienced friends, I went to the Bad Branch trailhead to ride the Red Trail, but ended up launching on to the Yellow Trail, realized my mistake only after several miles. Both Red and Yellow trails are pretty easy and I got back on the righteous path, but ended up adding 6 miles to the 8 that I had intended. The woods still show the devastation from last year's ice storms, with much of the area looking like a sloppy clear cut, though the trails are remarkably clear due to an amazing amount of work on the part of, I assume, the U.S. Forest Service and volunteers. 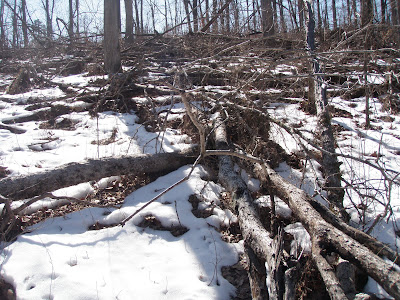 It was a warm day, but there was still quite a bit of snow around from the previous week and not all of the woods suffered as much damage as what is shown above. 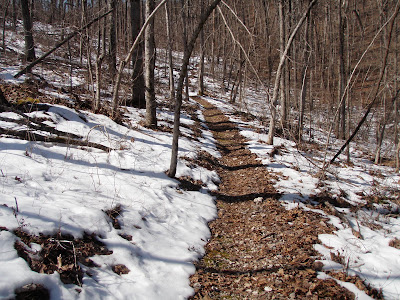 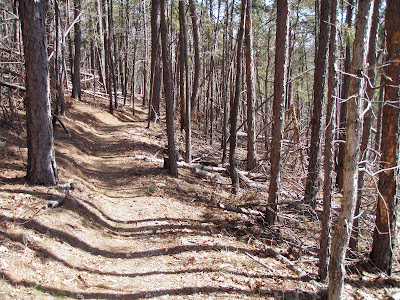 It took a lot of work to clear all of the trail miles in the Syllamo system, which has about 50 miles of single-track 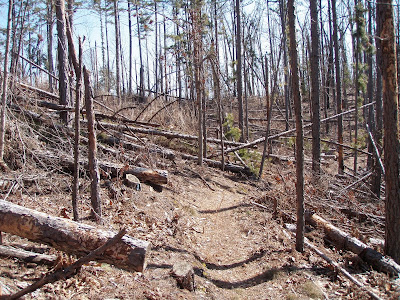 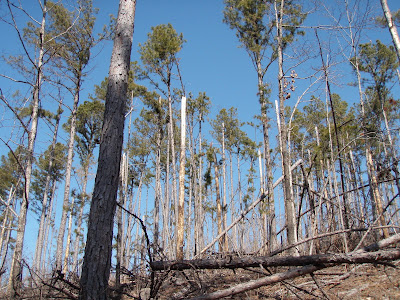 I'm looking forward to going back to Syllamo when I have more time and some friends along for company and safety. Road riding can be dangerous, but at least in the event of trouble, you're likely to be found before becoming critter chow.  Camping is available at nearby Blanchard Springs and you could easily spend a few days exploring the trails. There is a trail link to the camp ground, but I think the climb up from Sylamore Creek encourages many folks to drive the few miles to Green Mountain Road off of Highway 5 near Jack's Resort.
Posted by JBar at 10:57 PM

Two points:
1. The climb up from the campground is worth a very long drive around to avoid
2. You have to watch out for those sticks when you fall. I have heard stories of certain people getting sticks stuck in their head up there.