Along The Trail-Cosmic Events, Good, Bad, And Ugly

The last couple of weeks have been tough on my journalistic production time, between a little maintenance and small part replacement on me and extraordinary work demands, writing has been taking a backseat. Well, it's taken a backseat to riding, too. The days are getting shorter and warm weekends are precious, so when I have been able to ride, I've taken advantage with slightly more than the usual end-of-season urgency.
Is That a Dragon Eating The Sun?
Well, no, but it's pretty cool. I'm referring to the solar eclipse that occurred last Thursday. My ride partners mentioned the eclipse and I was aware of it, but skies were mostly cloudy and the sun was nowhere to be seen. I would see photos, I'm sure.  A short time later, as I rode across the BDB, I noticed a crowd on the telescope equipped observation decks. They were wearing funny glasses and the sun had come out. I asked them if the eclipse had come and gone, to which someone said, It's happening right now", and a young man with slightly purple hair said, "Here are your glasses", as he handed me some cardboard direct viewing eye gear. 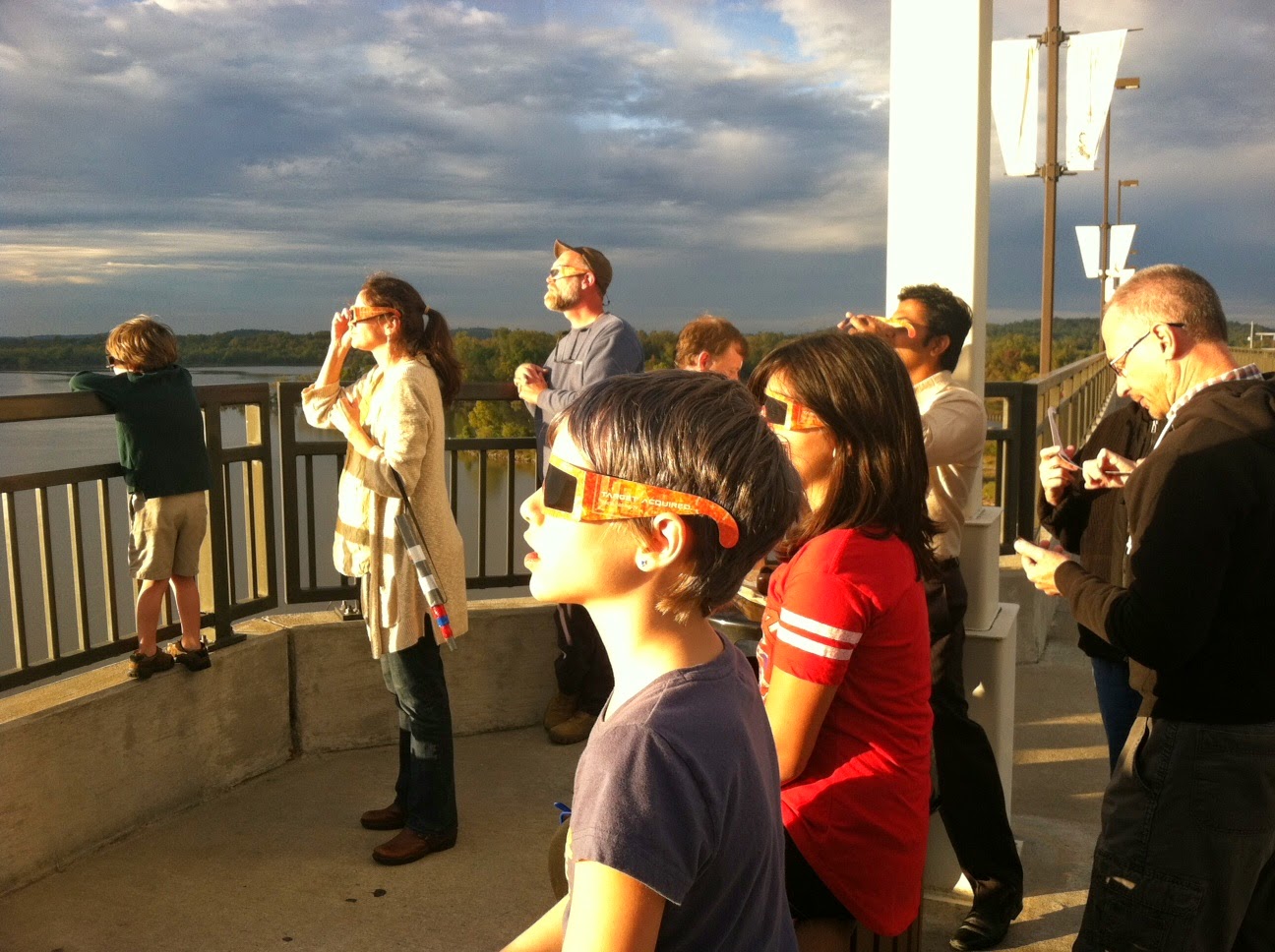 "Here are your glasses." Thanks, little brother!
It is always nice when somebody shares a small kindness and an experience with a stranger, especially when you're the stranger. Fortunately, small kindnesses happen regularly along our River Trail system, as anyone who has ever had a flat tire on a busy day can attest. If you need help, somebody will stop. If you don't need help, you'll find yourself busy turning down offers of help. 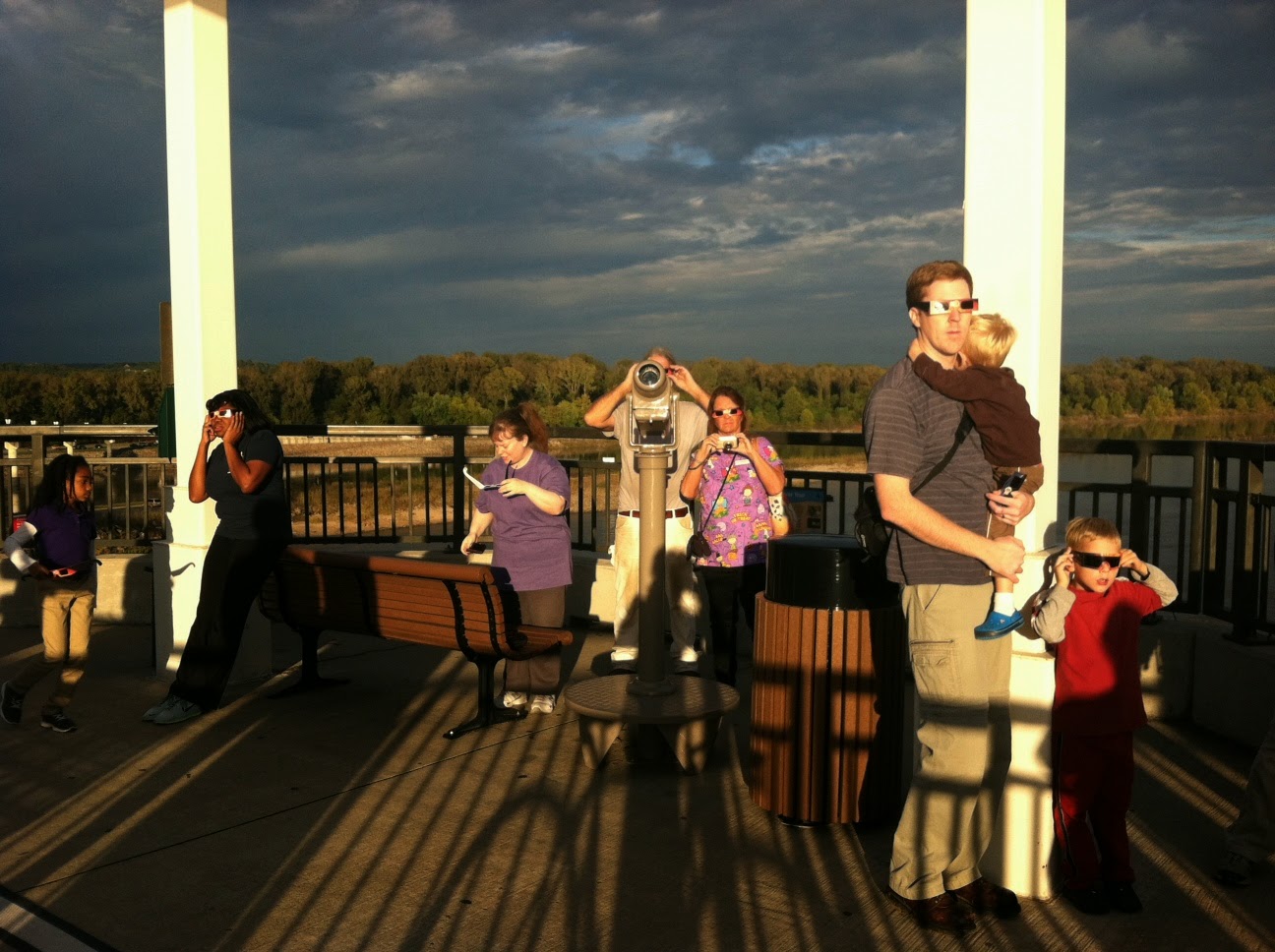 I wish that I had taken a peek through the telescope.

I'm sure that eclipses were indeed frightening and mysterious before science came along with a rational explanation. Such cosmic events still serve as a reminder of our very small place in the grand scheme of things.

Oh, Boy!! Dark and Cold Around The Corner
Saturday marks the end of daylight savings time. 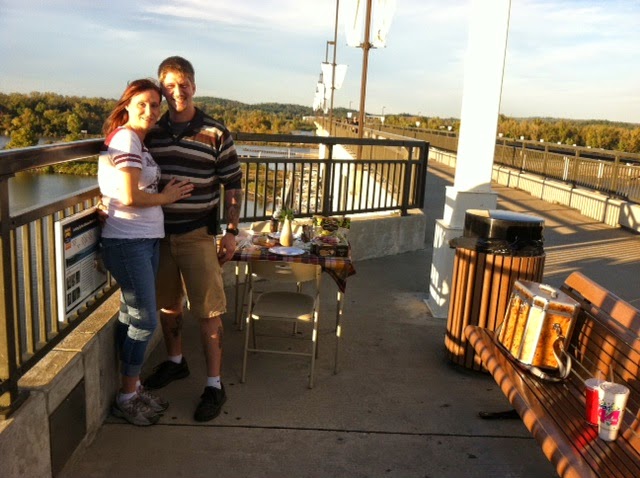 Ready for the sunset. This couple was enjoying the warm weather the last week of daylight savings time with an evening picnic on the BDB.
For most of us, that means a curtailment of after-work rides or getting out the headlights and cold weather gear. With highs Saturday forecast to be in the 50's, it appears that we'll be losing light and warmth in one fell swoop. Winter time riding has its merits, but I can't think of many right now. 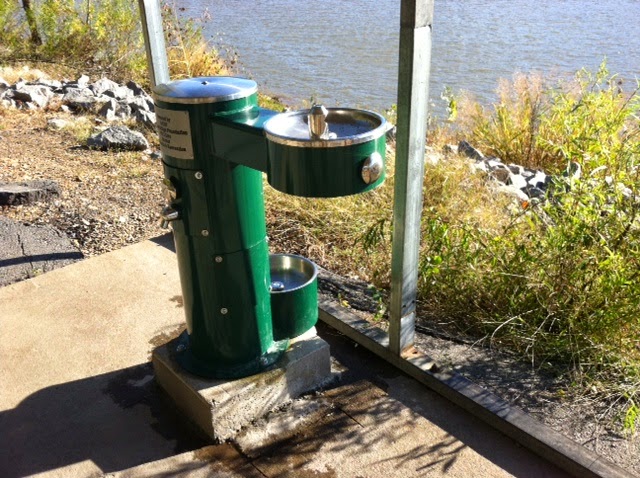 The fountain at the north end of the BDB has been replaced with this pet and bottle friendly model.

Not So Friendly Along the Trail

Bad: Selective enforcement?
On a recent Saturday, one of my ride partners talked to a runner friend who had been ticketed for parking in the grass near the BDB on a crowded Saturday. I can't really defend scofflaws, but....
On the same weekend, a mile or so up the road, dozens of cars and buses were illegally parked for a cross-country meet in the bike lane and on the grass along Rebsamen Park Road under the watchful eye of two LR police officers who were directing traffic at the golf course driveway.
On any given Sunday afternoon, Rebsamen Park is usually crowded with folks cooking out at the pavilions and picnic tables with lines of cars parked on the grass, hip-hop music blaring lyrics that make my even grizzled F-bomb dropping ass uncomfortable. Most of us are familiar with the open party scene that occurs most weekends.
It appears to me that the LRPD drops by to write a few tickets to the runners and riders who are drawn to the River Trail and the BDB, but they are wont to piss off the party crowd, where shots have been fired and alcohol seems to flow, or make track athletes feel unwelcome.
The parking situation at the BDB is limited and calls for some tolerance. The city's response is to suggest that people park 1/2 mile away where their cars are more isolated and more likely to be subject to break in or worse.
There needs to be some sense made of parking enforcement. Either it's OK for all of us or everybody gets a ticket.
Ugly:A-Hole Alert
While riding out County Farm Road early last Sunday, a pickup pulled along side and the driver started screaming advice that he would likely not have wanted his momma to hear. No big deal. Then, as we go on Pinnacle Valley, said A-hole came out of Beck Road and made another pass. My ride companion thoughtfully called out "God bless you', to which he got "FUCK YOU!" in return. Inappropriate response, I'd say. The guy then drove up the road and screamed at some riders waiting on the roadside.
I called the sheriff's department just to report the incident. The vehicle was an older dark-colored Chevy with white door panels and a "decorative iron" sign on the door panels. If you should encounter hits guy in similar circumstances, please call the sheriff. I think he probably lives in the area and appeared to be out for the sole purpose of being an ass. If he ever escalates his actions, it might be useful to have something on file.We failed to get his license plate number.
Posted by JBar at 3:56 PM

Hmmm....somebody spammed the ol' blog.
Obviously, not my pint of view. I think American women are just fine.