I fully expected to be in the spring mode by this week, but it was not to be so! Lingering cold and gloomy weather continue as I write this article from the JBar Bunker, where my limited view outside remains a frozen white. 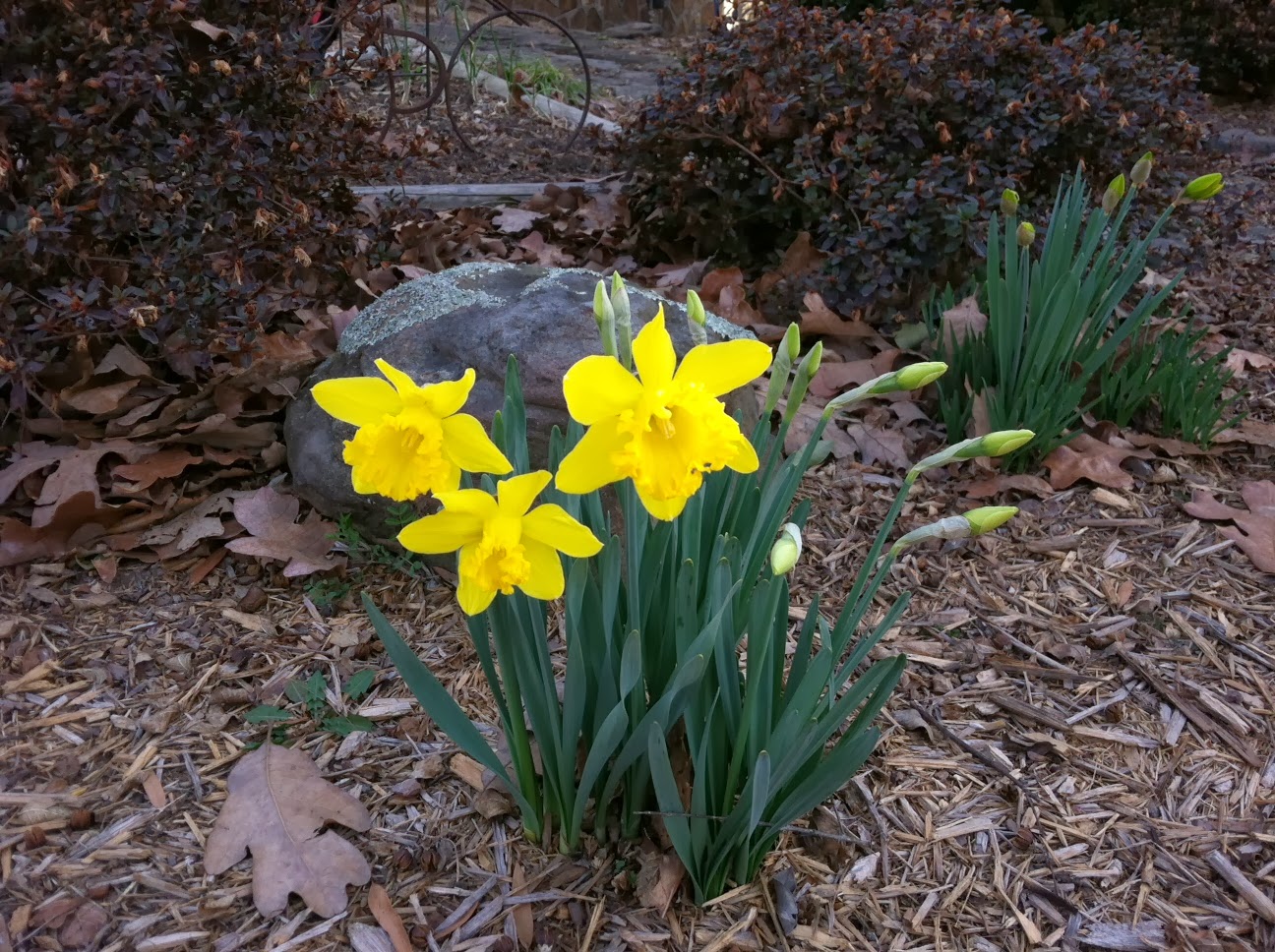 When we returned from a ski trip last week, I took these blooming daffodils as a sign that spring was indeed comng to Arkansas! 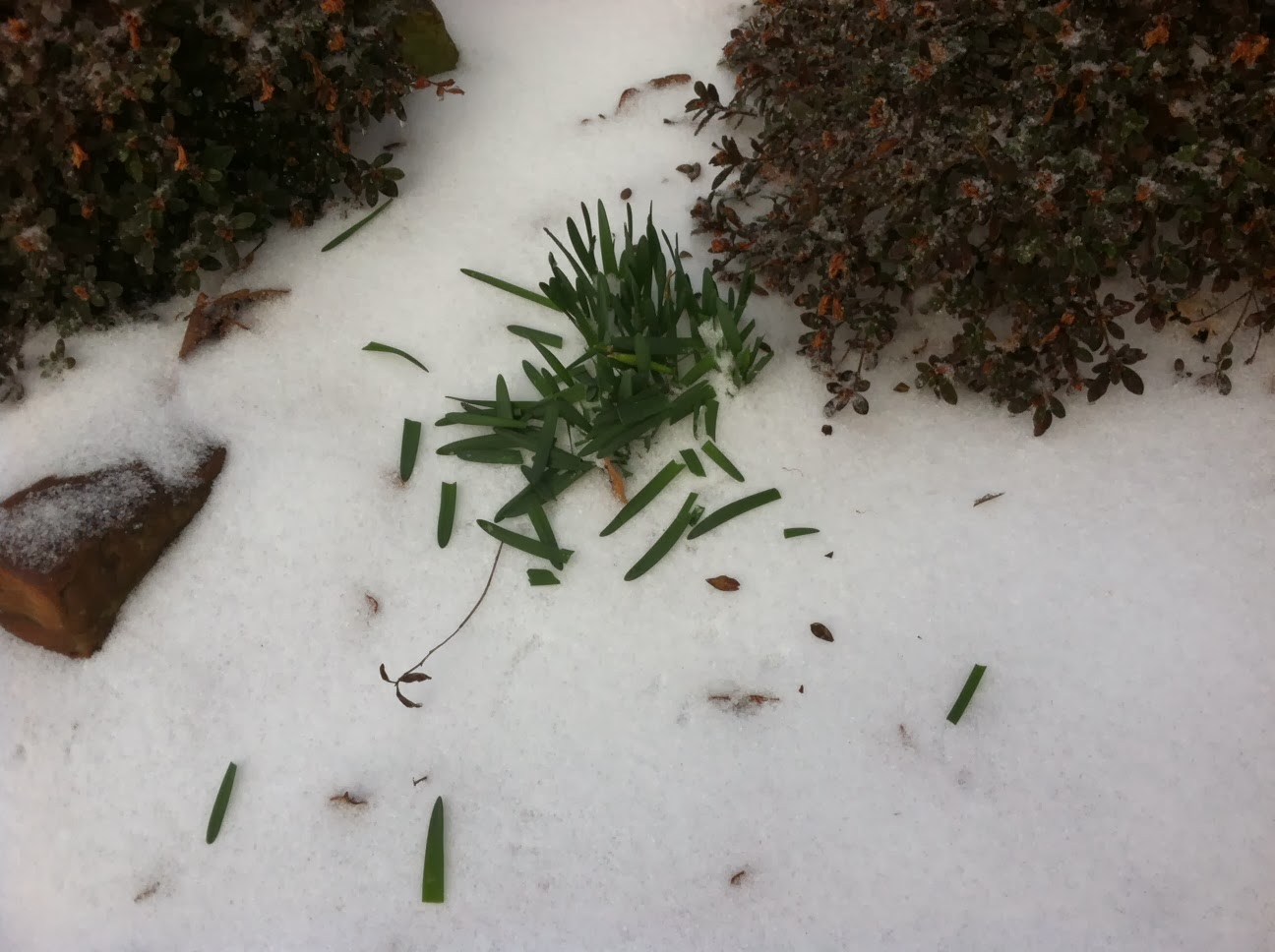 Shattered along with dreams of an early spring: When I let Willie dog out the door on Monday morning, he brushed by this daffodil, shattering it and scattering ice-encrusted leaves across the sleet.
Life and scheduled events go on
Though most of our after work rides and many other casual outdoor activites have been curtailed due to shitty weather, long scheduled events go on. On Saturday, the Tweed Ride and South Main Mardis Gras Parade managed to carry on in a festive, if cloudy and cool,  atmosphere, while some 10,000 runners and the organizers of the Little Rock Marathon kept an eye on ever-deteriorating weather forecasts.
Styling On Main
I considered putting on my driving cap and tweed sport coat, but instead stuck with my good old fashioned lycra Roubaix knickers, a jersey and capeline base layers in preparation for the Tweed Ride. After all, I was only there as a reporter, though I really like the ride. I think such events bring about a sense of community and it is simply good fun! 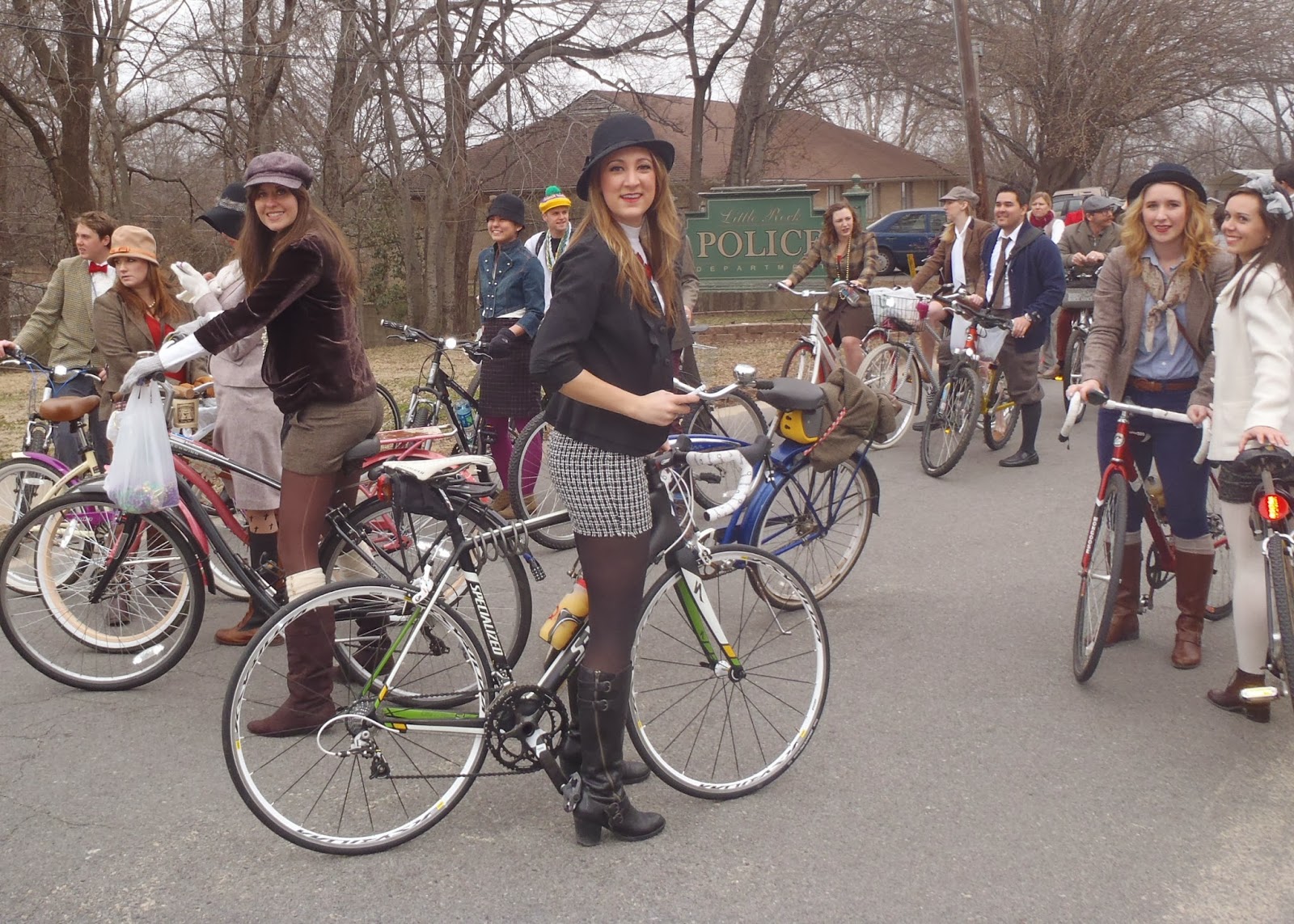 The ladies were quite stylish! I'll admit to a fondness for this look on the bike. 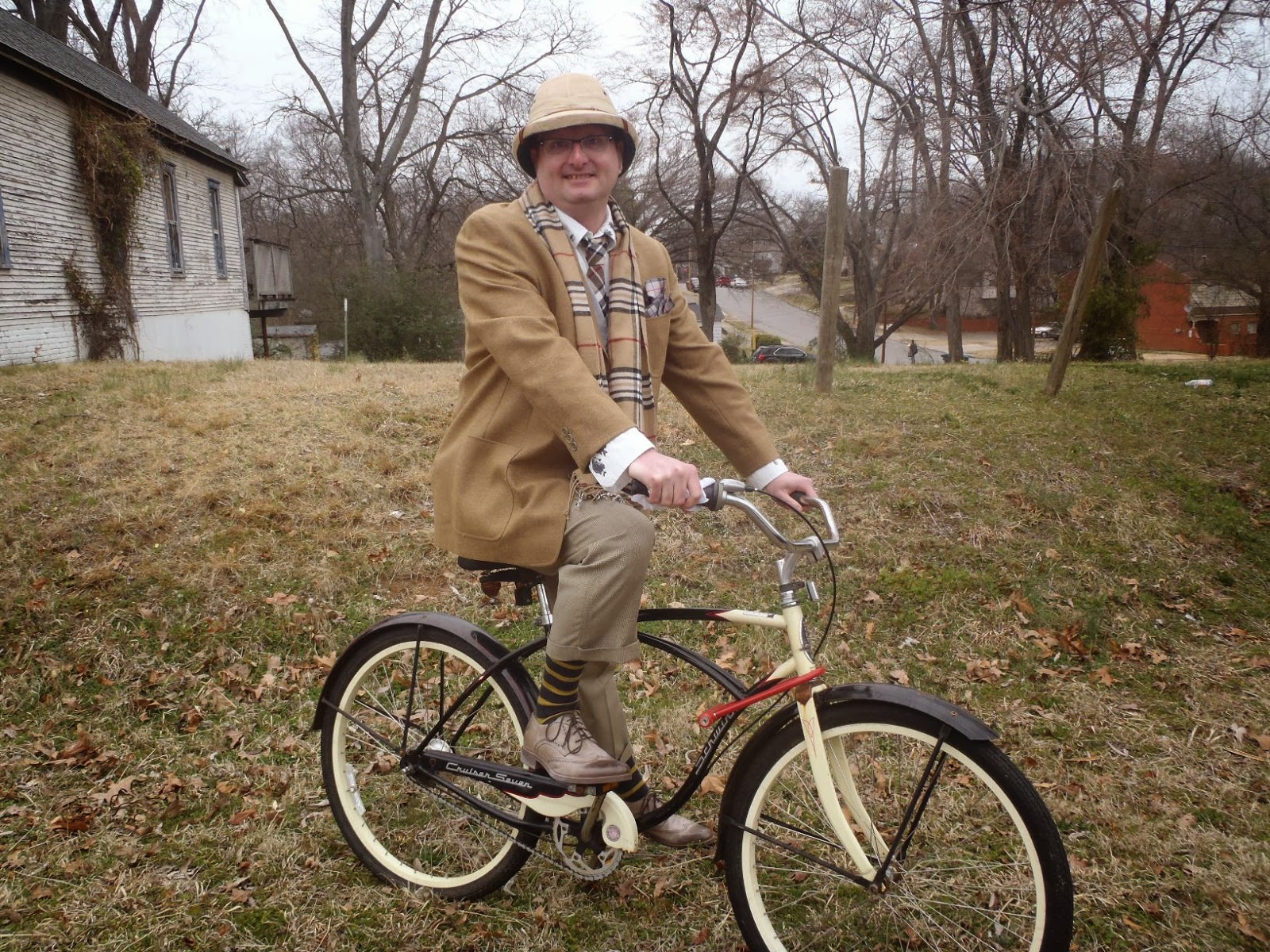 The women didn't have a lock on style. The rider of this classic Schwinn was perfectly decked out from head to toe in subtle good taste. Note the matching tie and pocket square set off by the dashing scarf. 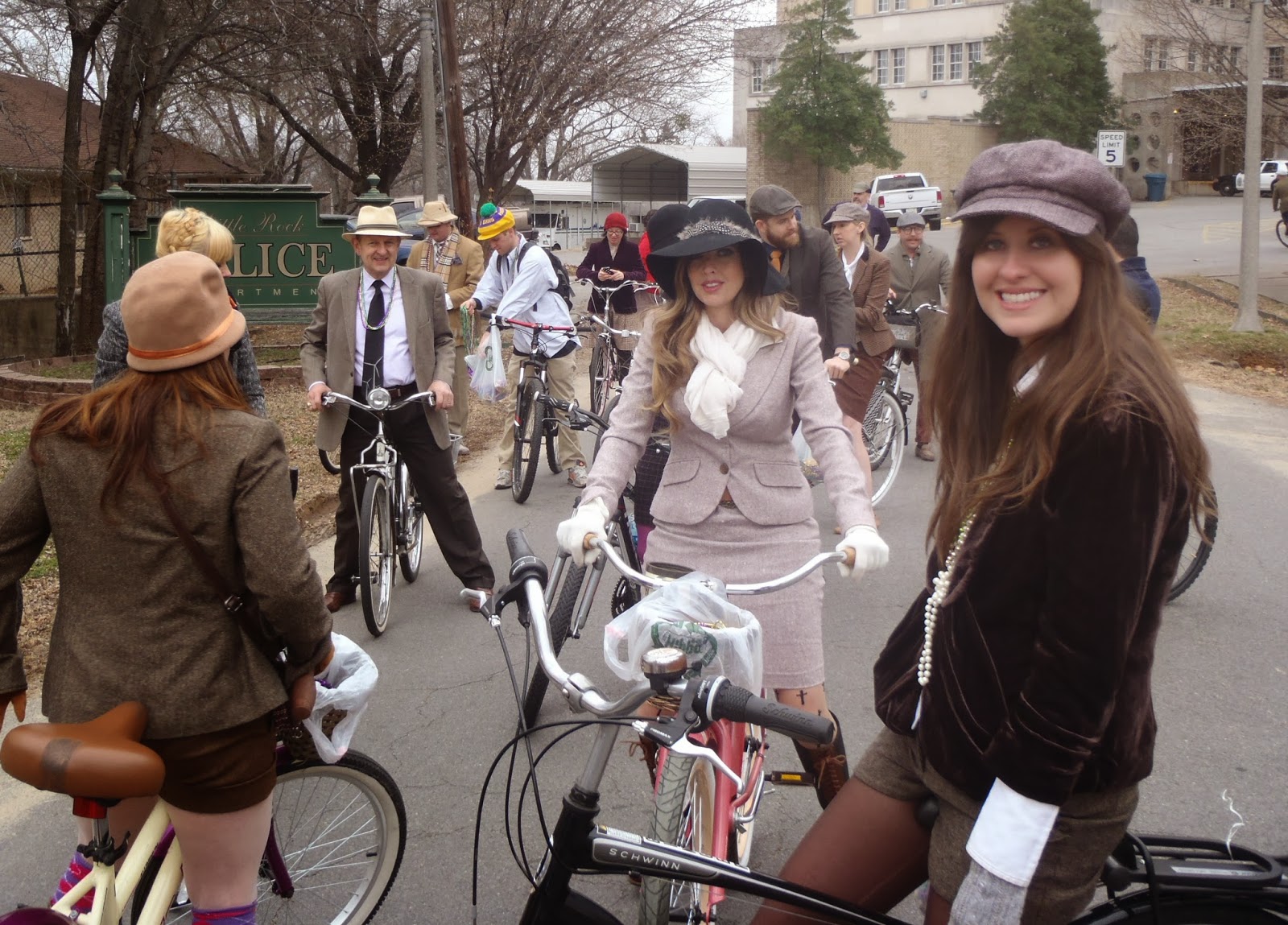 Lining up to join the South Main Mardis Gras Parade. 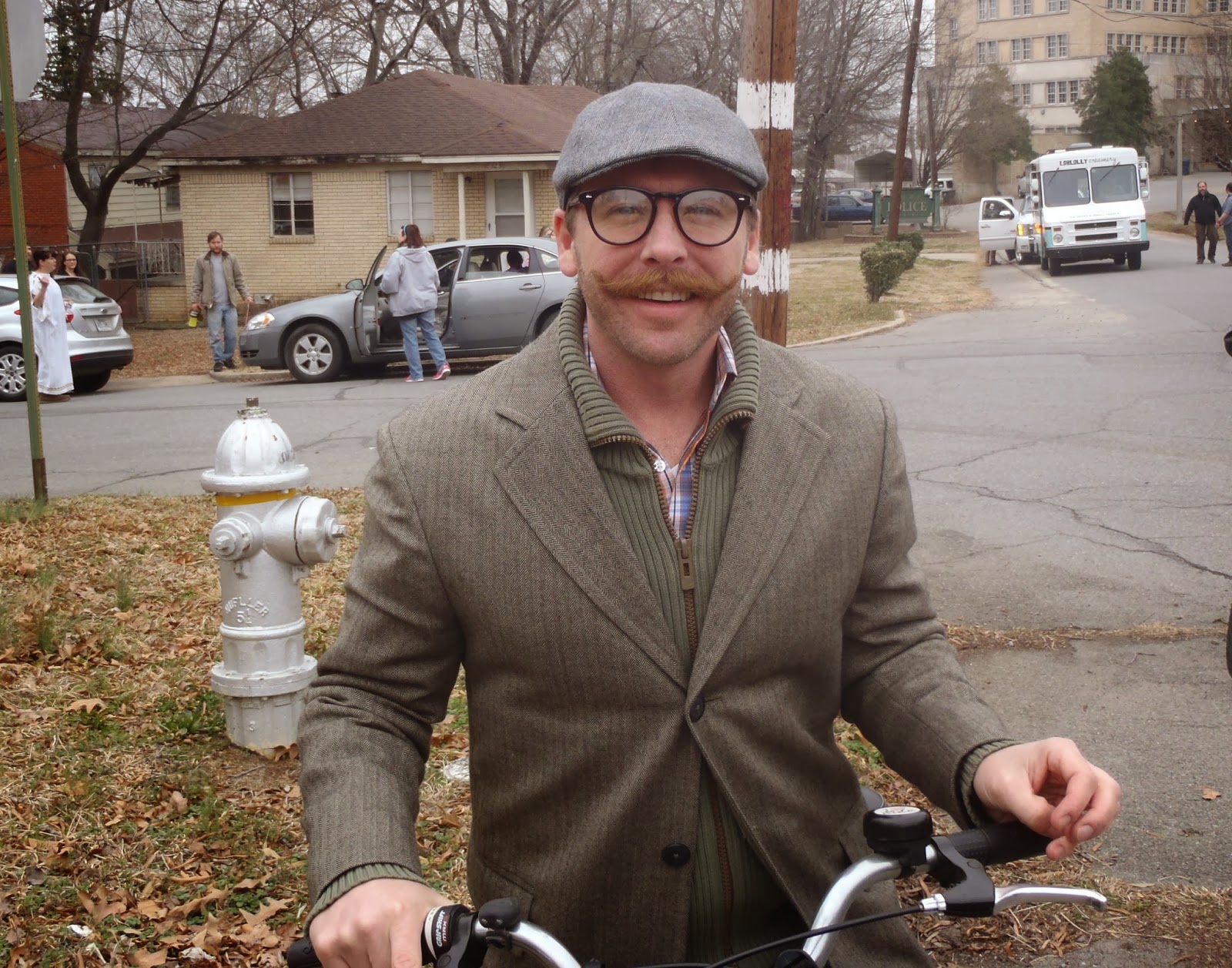 Jeremy Lewno, owner of Bobby's Bike Hike and LR Pike -Ped coordinator, won the prize for best costume. We could debate the point of "best costume" but his carefully cultivated moustache ruled! 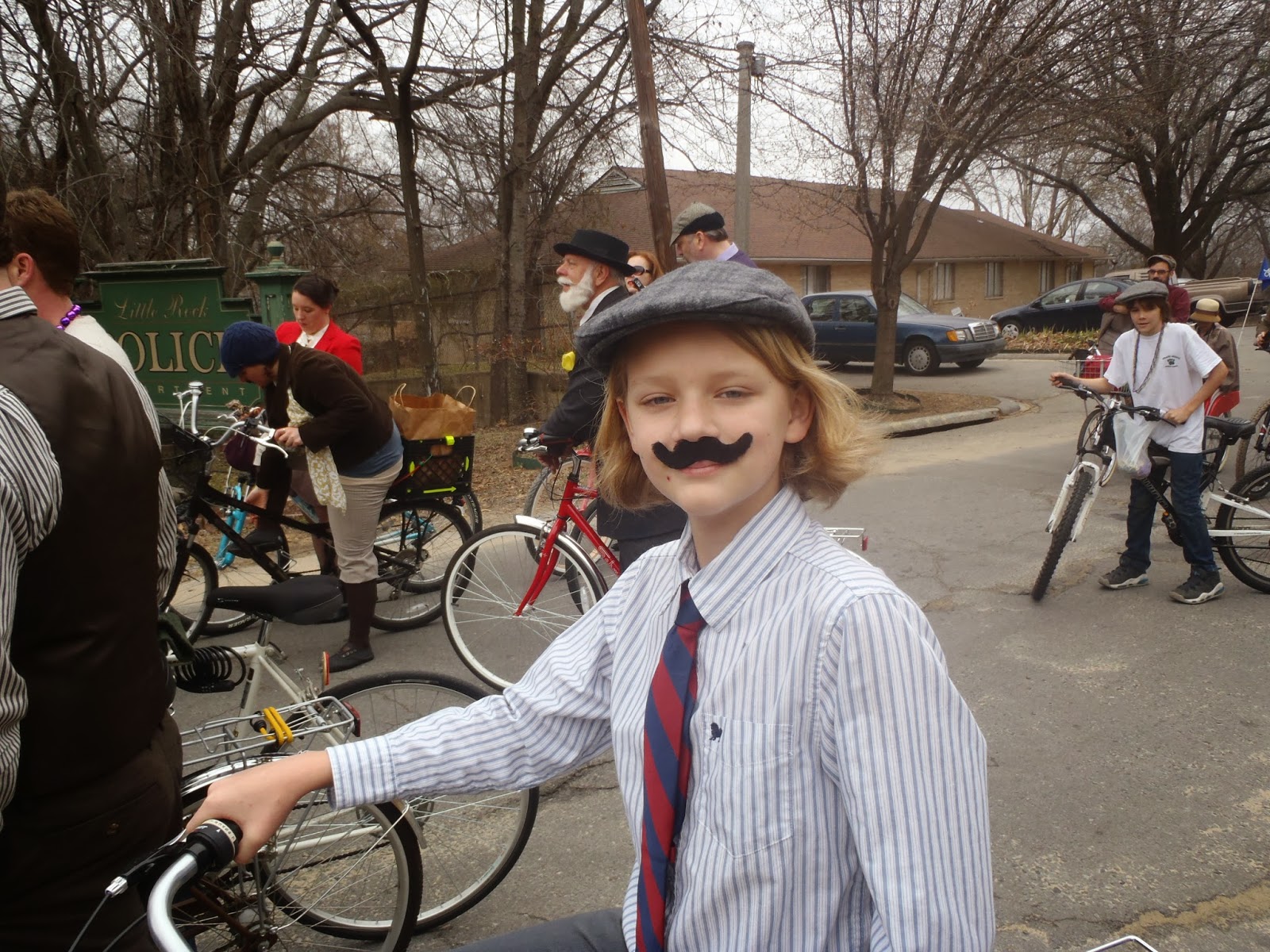 I sensed that this moustache lacked the months of cultivation demonstrated above. Maybe next year, kid. 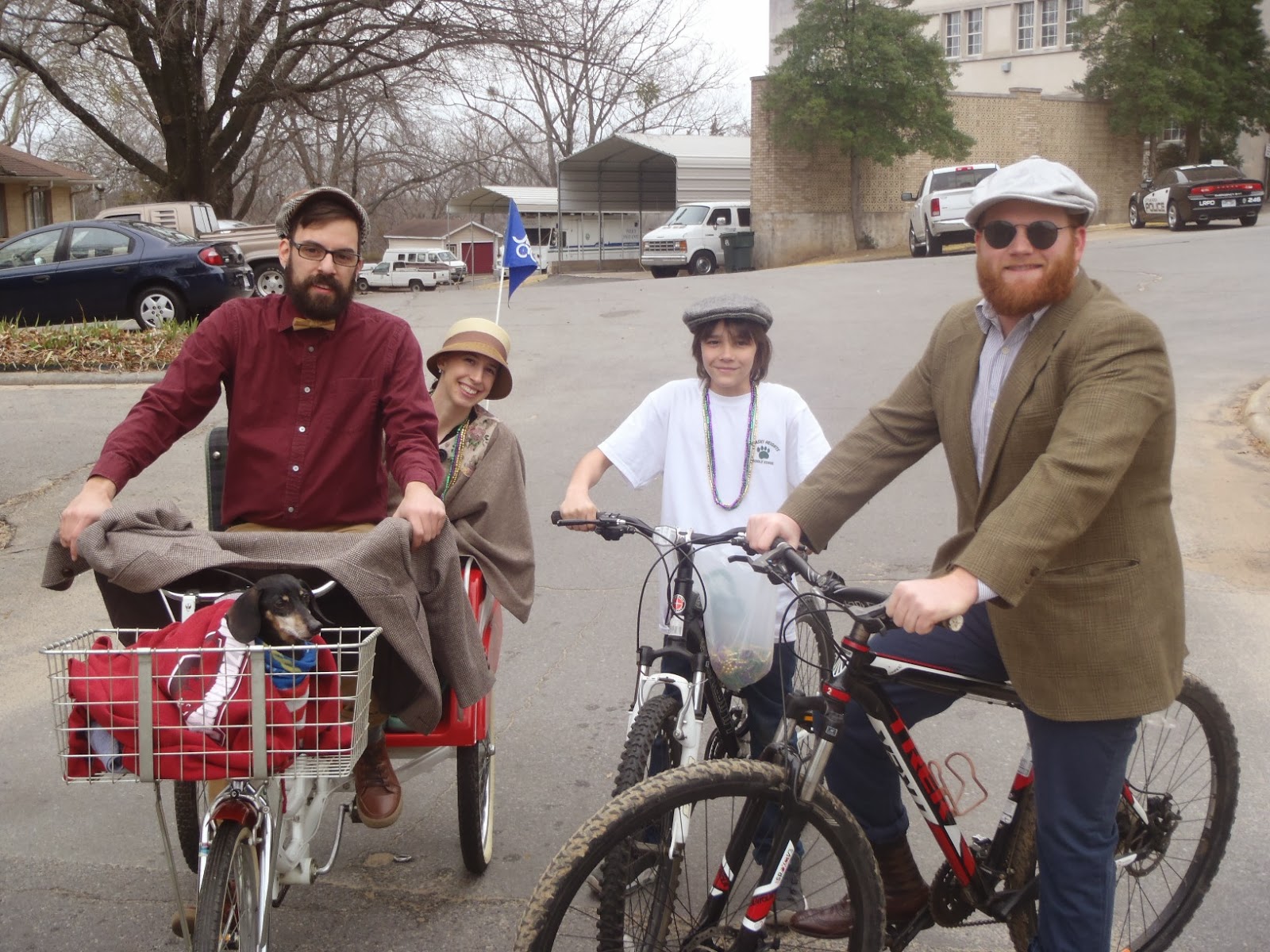 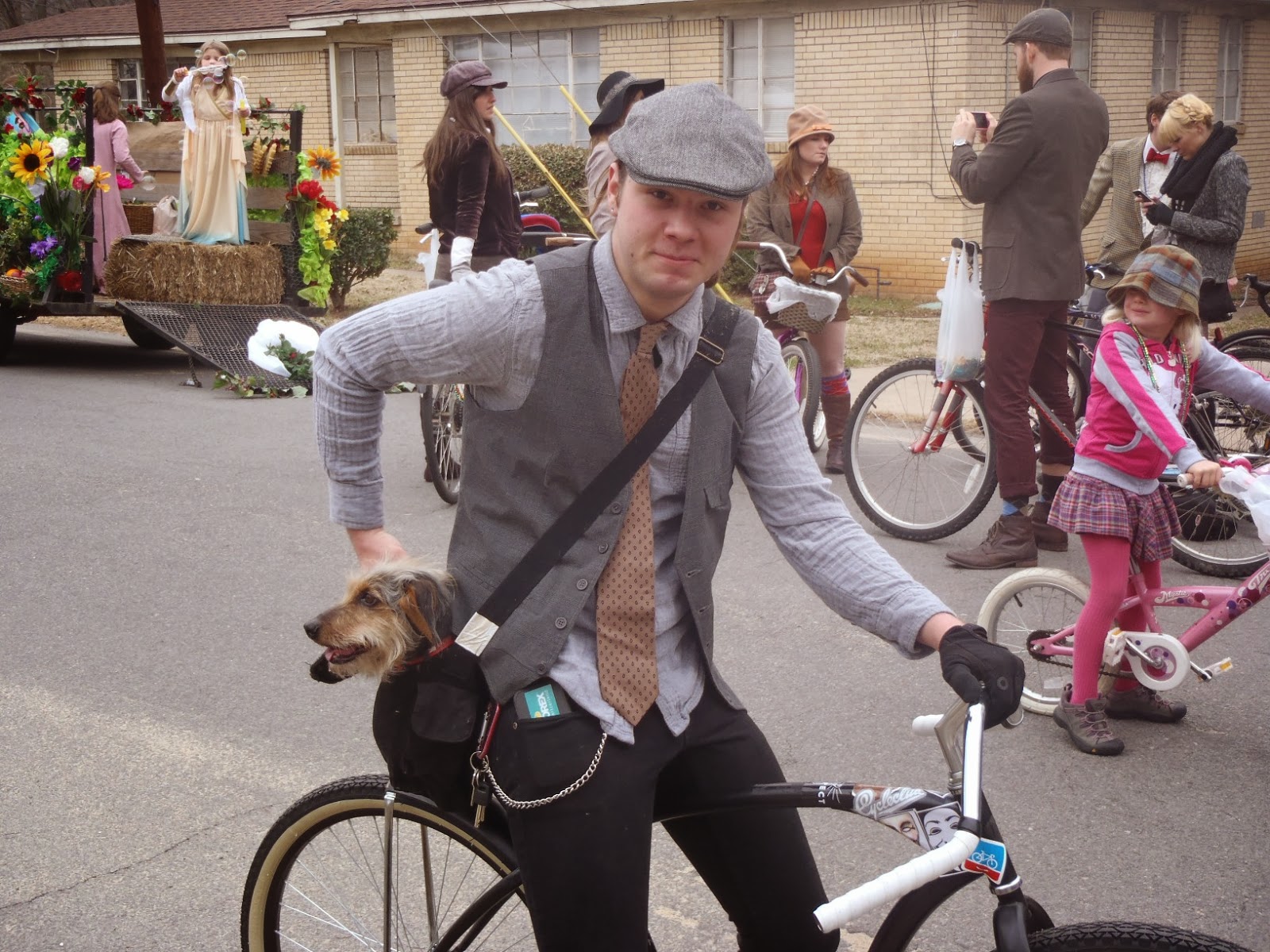 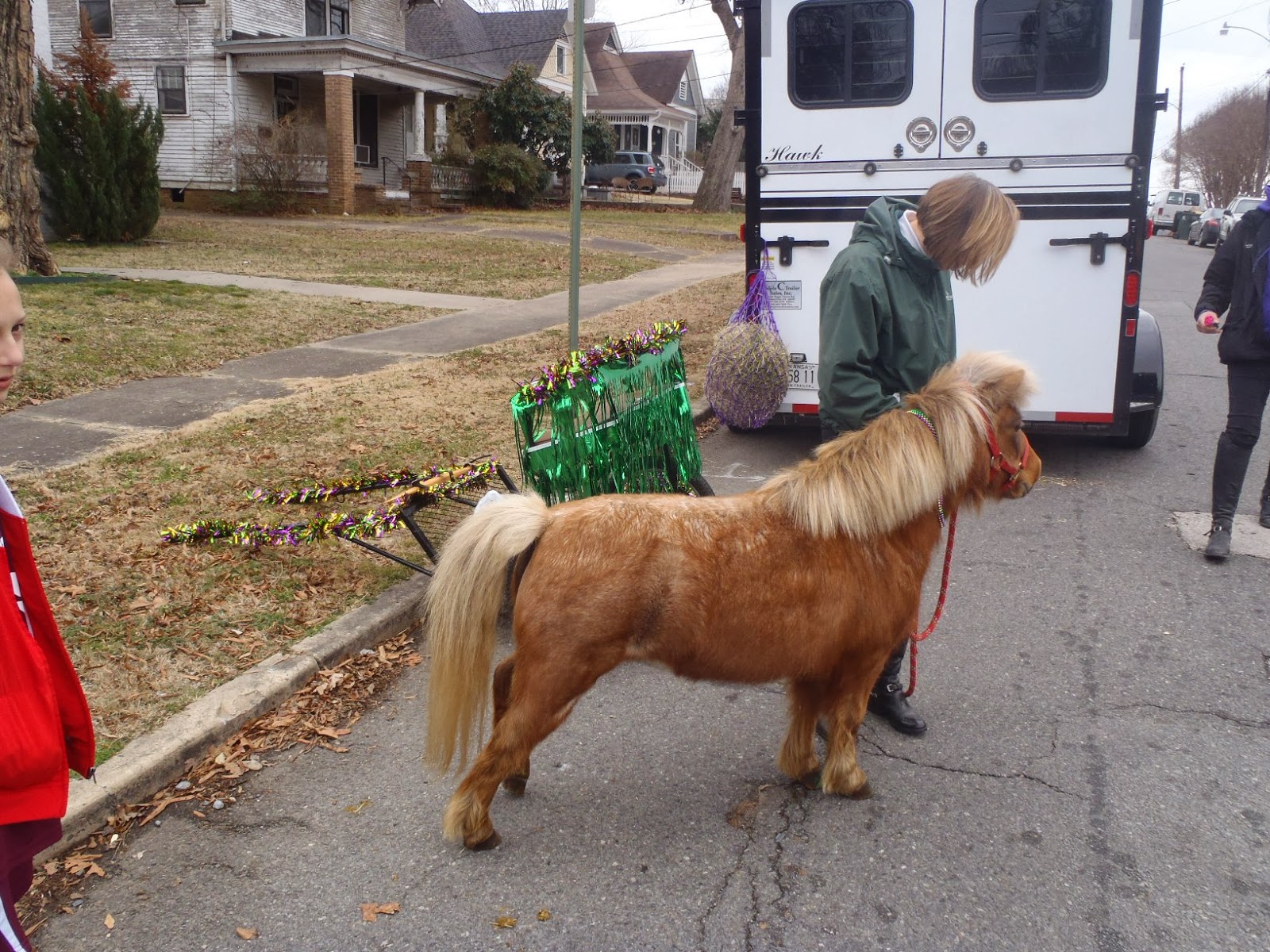 The rest of the dog and pony show. 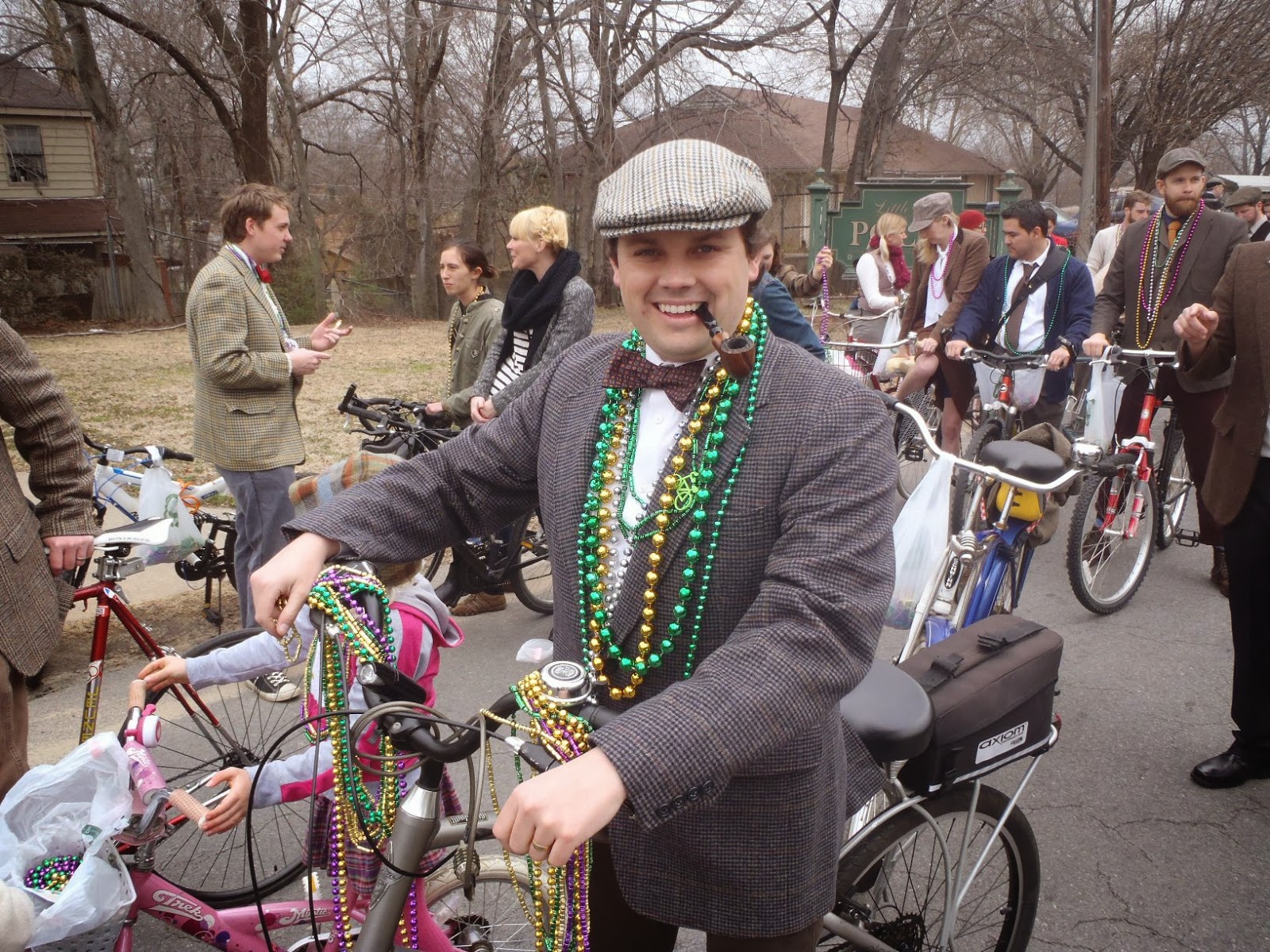 Mason Ellis had it all going on! He assured me that he had tied his own bow tie, an art I've never mastered.....or even attempted.
I've got to stop somewhere, but I really enjoyed the photos from the Tweed Ride. Maybe next year, I'll actually participate. In the meantime, I'll be keeping an eye out for the perfect old Schwinn.
SPOKES IS OPEN AT ORBEA ON MAIN! 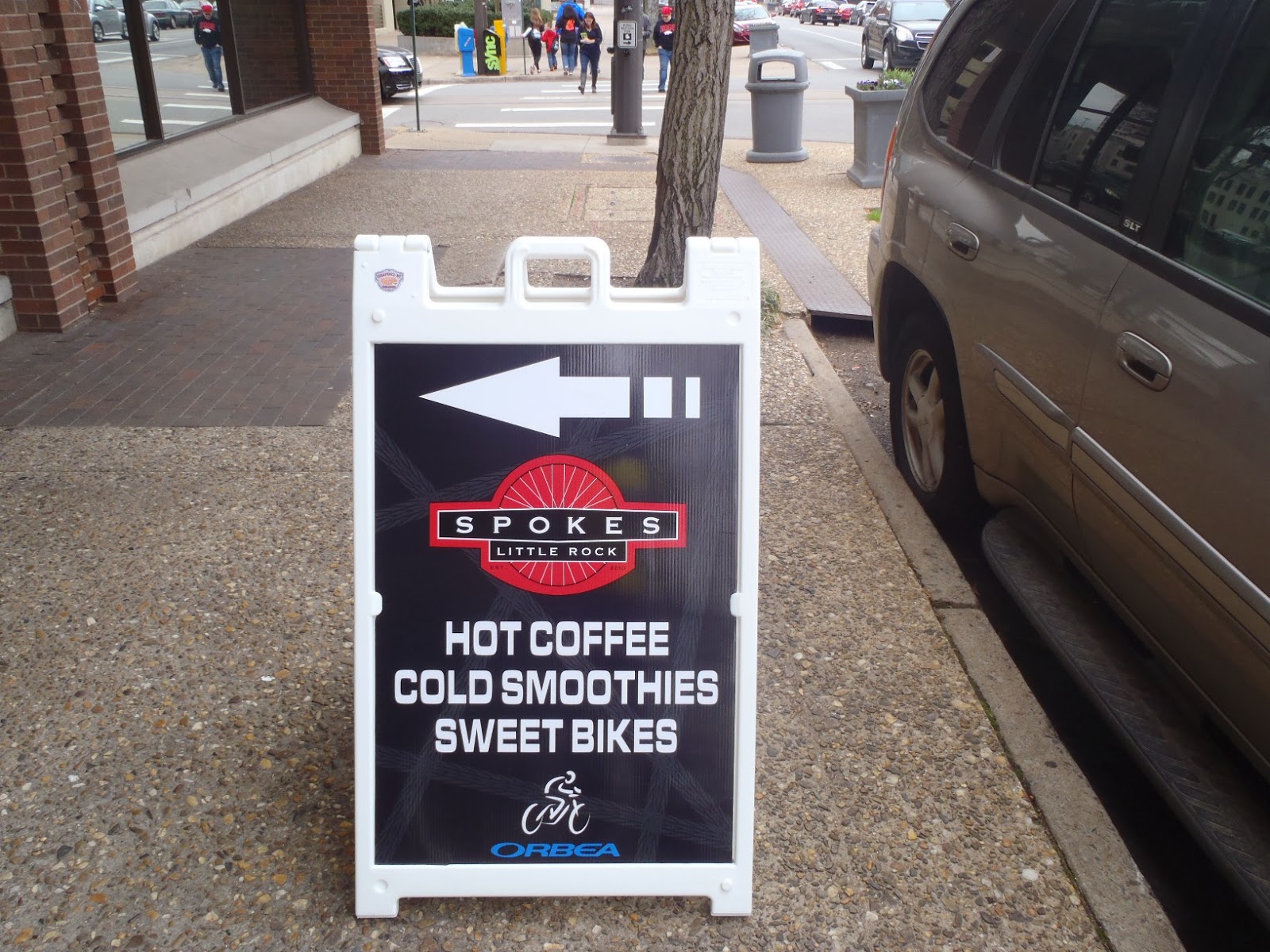 After some construction delays, Spokes shop and coffee bar is now open  in Orbea USA at 119 S. Main 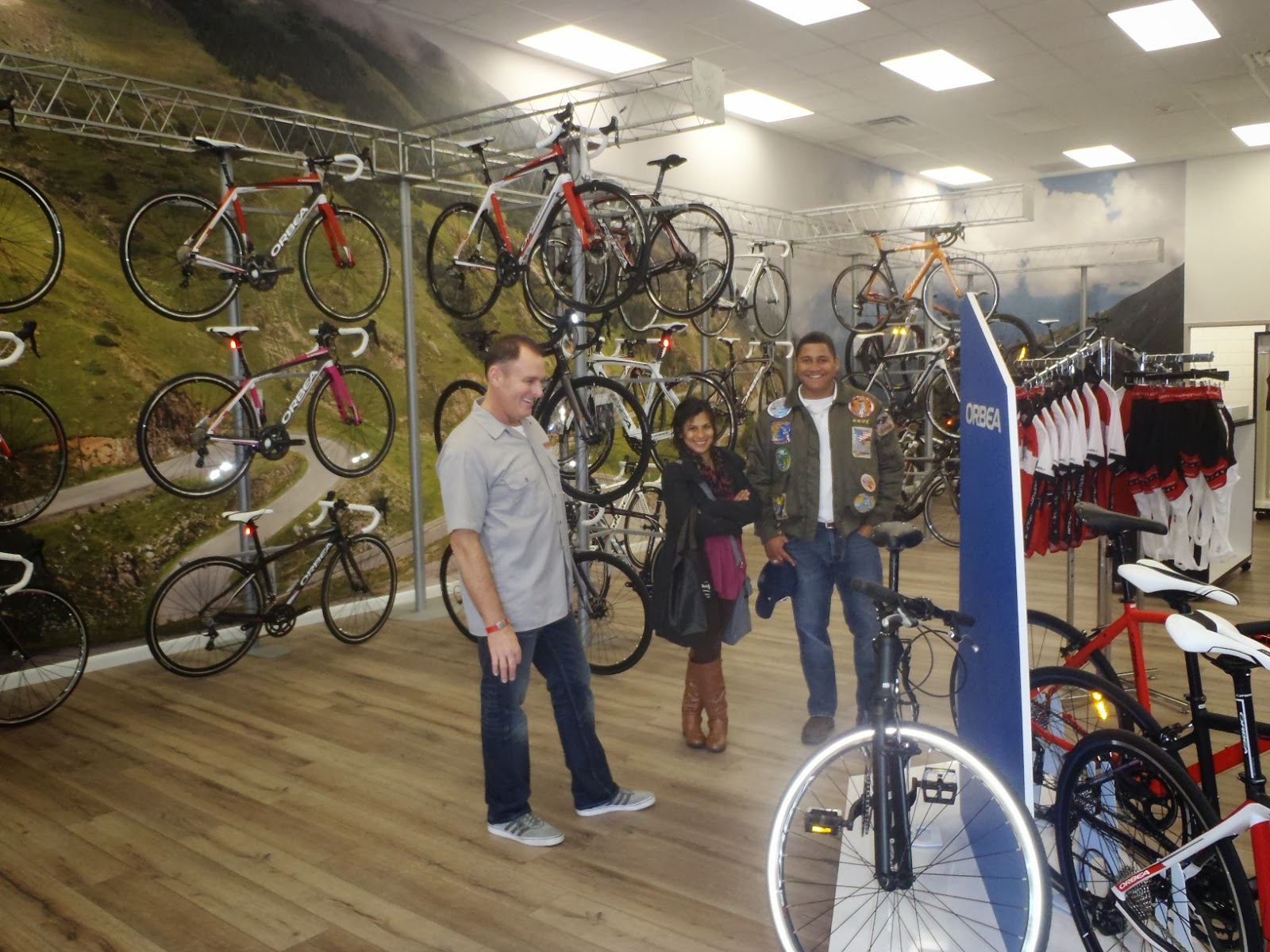 Mat Seelinger of Spokes shares information about Orbea bikes to some customers. 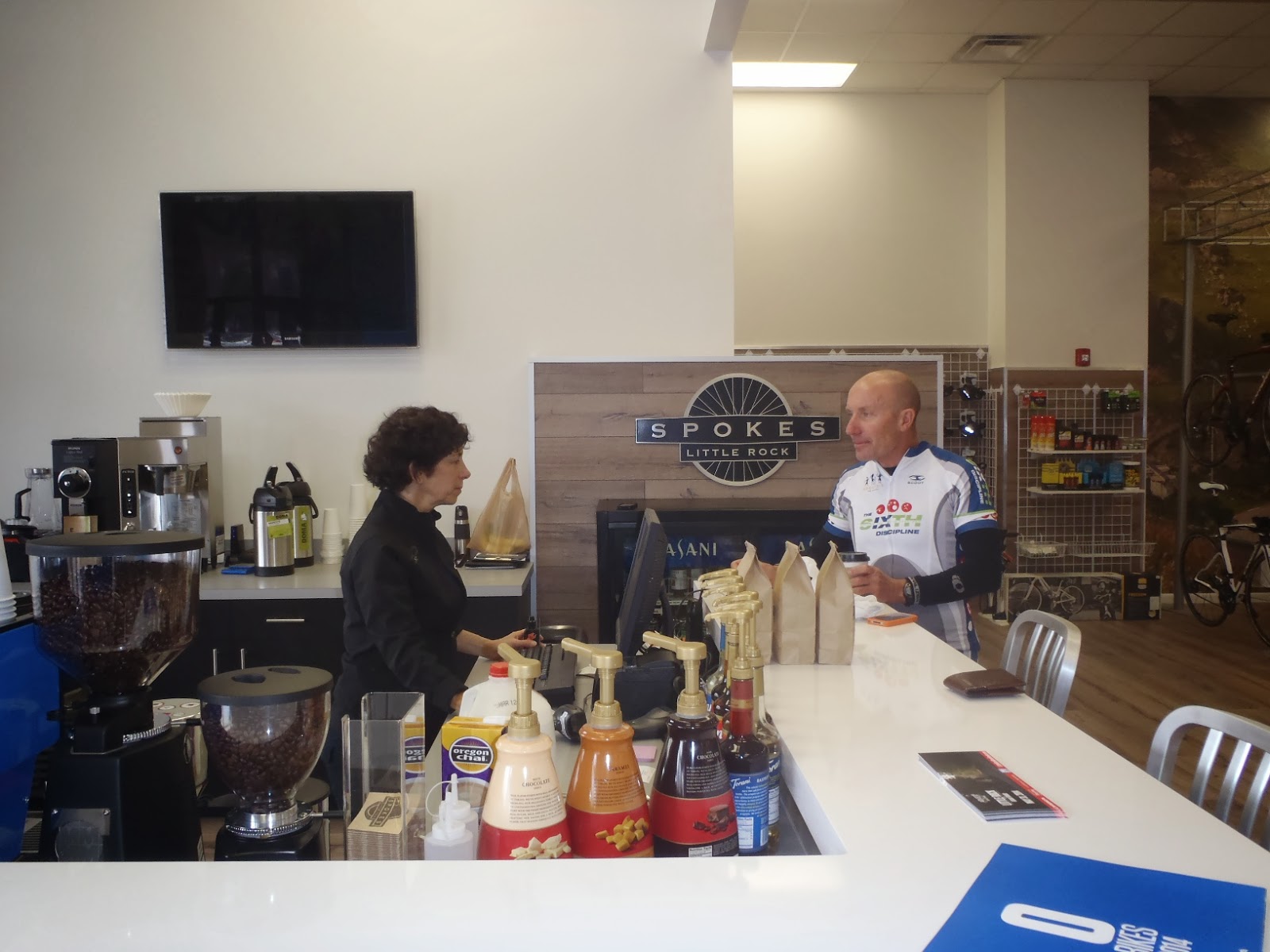 Mat said that their coffee was going to be "even better" after some recent on-site training by their Doma Coffee rep.
The shop on Main will offer Orbea bikes and accessories and limited bike service, along with coffee, espresso, blended drinks, iced drinks, and fruit smoothies. Here's wishing them success. Tony Karklins, of Orbea, USA, has worked with Michael Chaffin of the Capital Hotel on several events and promotions to help bring new business ideas to downtown Little Rock. The cooperation of Orbea, Spokes, and the nearby Capital Hotel has the potential to bring fresh life to this end of Main St.
2014 Little Rock Marathon
I've volunteered to ride escort for the LR Marathon for the last few years, but had decided to pass on the opportunity this year. My resolve lasted until my phone rang and our friend Rich Cosgrove asked us to help the entertainment chairman, to whom he happens to be hitched. Nancy Green is one of those south Arkansas women who just seems born to organize. Soon, Diane and I were signed up to run any required errands along the course for the entertainers.
The forecast had narrowed down to 100% chance of rain, thunder, wind, and cold, so we decided to go ahead and start out  on our town bikes and just see how long it would take for the weather to sweep us back to the car. 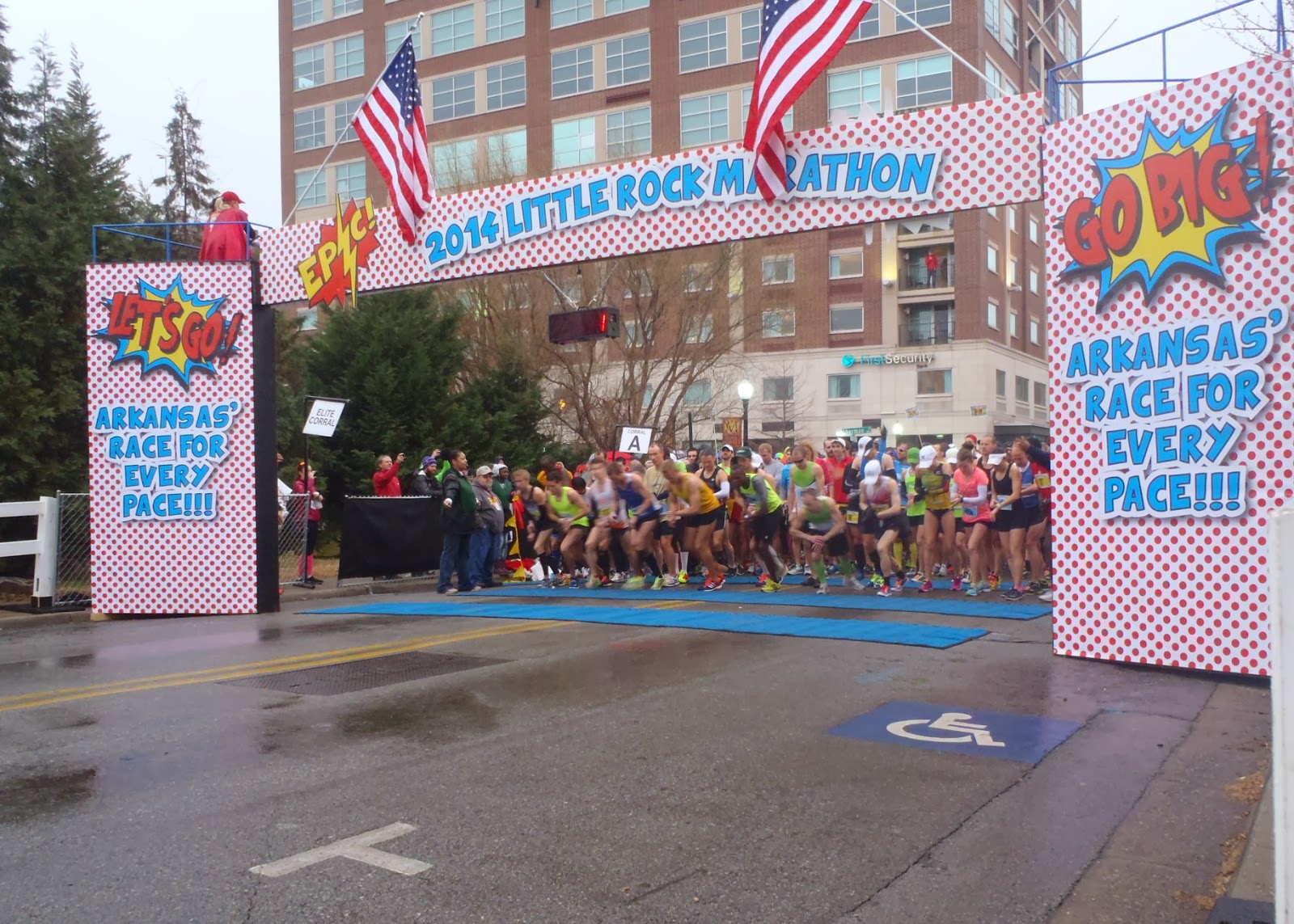 It was wet at the start, but the serious rain held off until later. 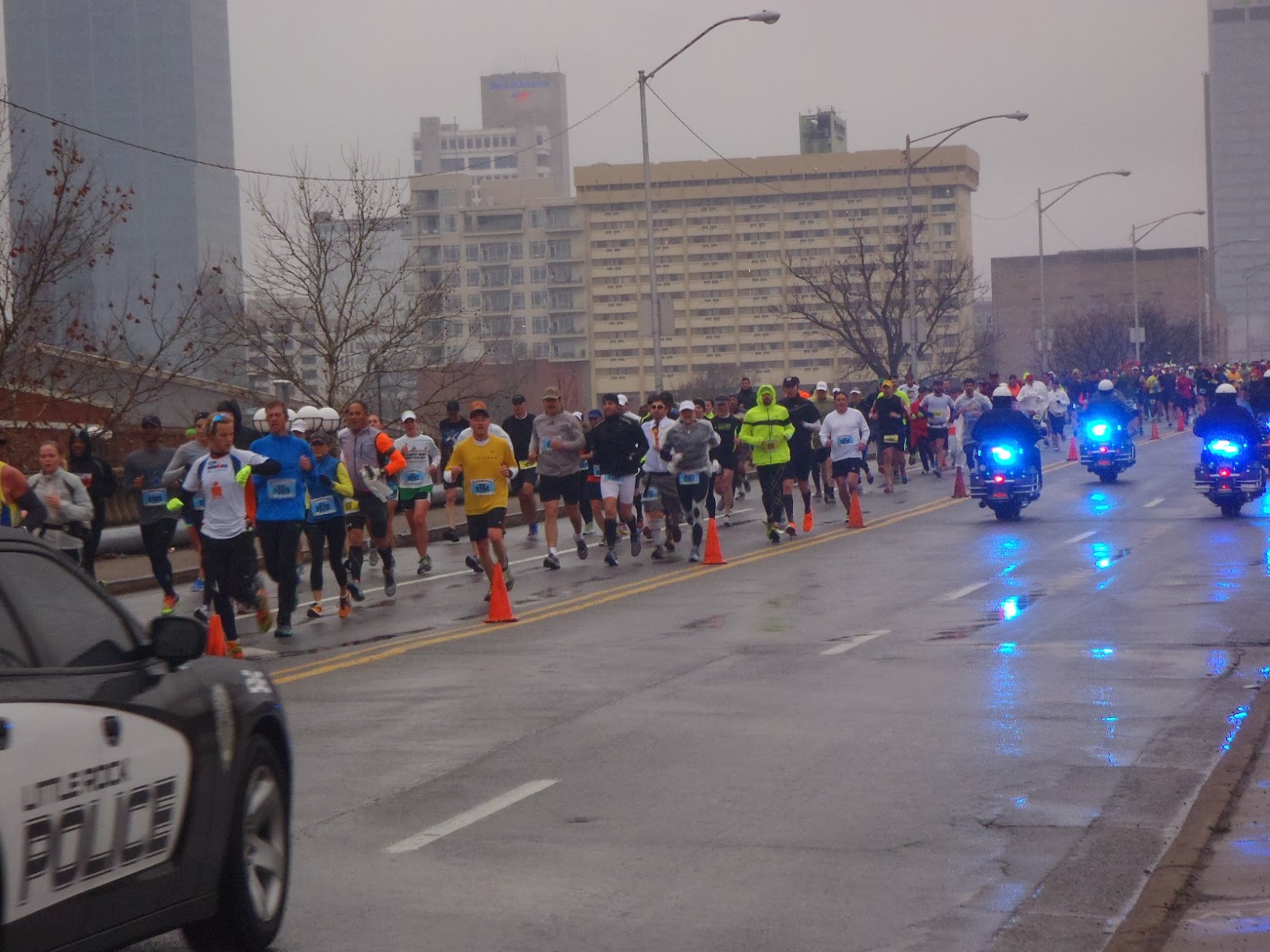 Runners stream over the Broadway Bridge into North Little Rock.
From the Heifer Project parking lot we headed to the start line. It was already drizzly but the temperature was in the  mid-50's. "Can I take this to go?"
Vino's on 7th St. once again offered up their Amber to runners. 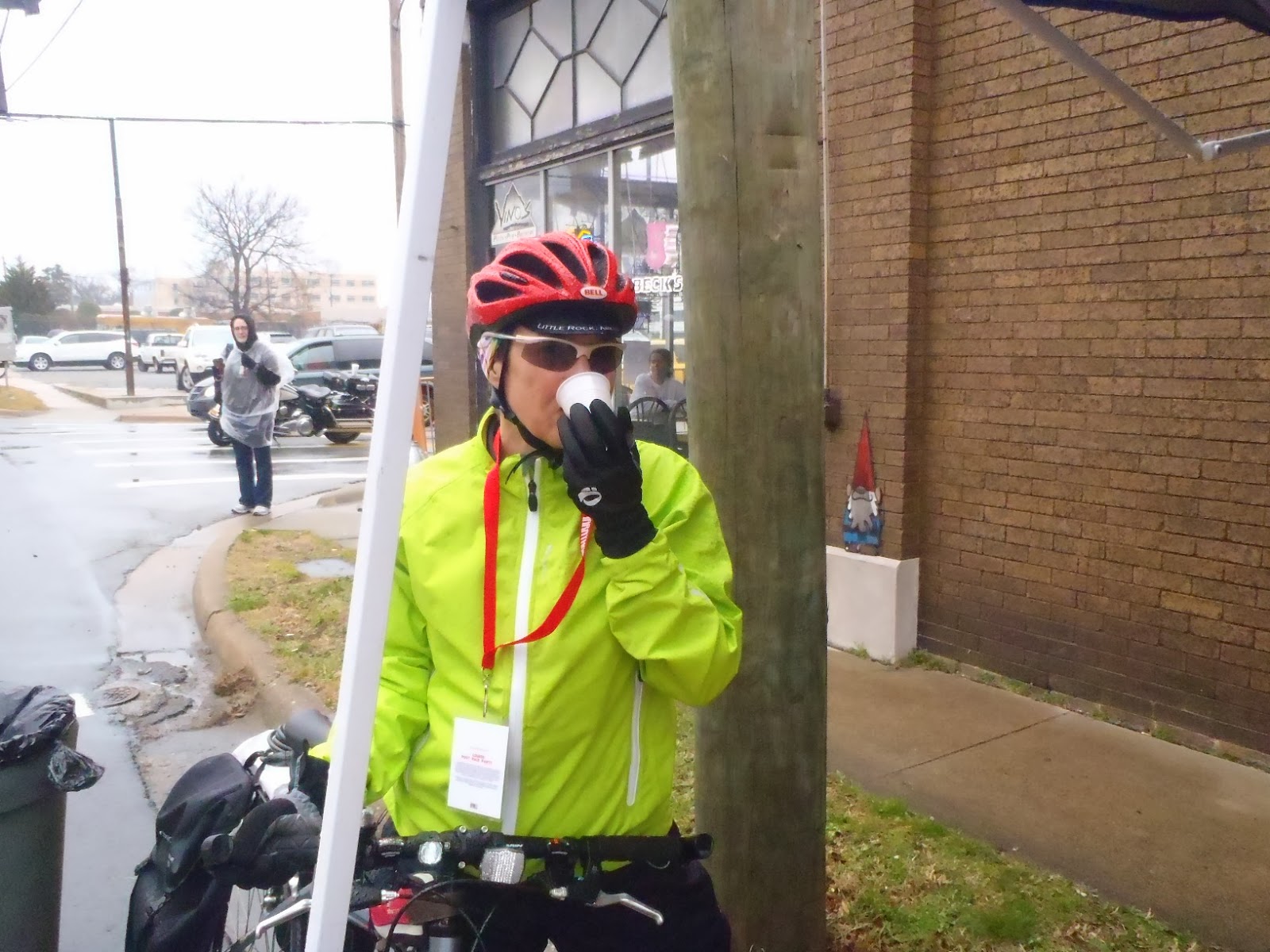 Volunteers need love, too.
Most locals know the story by now. Things went OK and hardy runners braved wet and ever-colder weather. Around 11:30, thunder boomed and organizers got reports of numerous lightning strikes in the area. Runners still on the course were detoured to a more direct route to the finish or offered bus rides. It could have been much worse, as the weather continued to deteriorate and by Monday morning central Arkansas was again covered in ice.
On the bright side...
Sunday night marks the return of Daylight Savings Time! We'll have an extra hour to ride after work and the weather has got to break soon!
﻿
﻿
Posted by JBar at 9:28 PM

That was Arkansas Outside Amber at Vino's...best beer in the world!

It was tasty! I prefer the hoppier Pinnacle IPA, but the AOA was quite refreshing and perfect for mid-marathon libations.

WOW!! Do you know the name of the tweed ride girl on the specialized with black boots? She is stunning!!!