Last March my friend Fairweather Jones finally poked his head out after a long winter hibernation. It was a glorious day with a high near 70 and Jones appeared in full tights, multiple base layers, vest and other winter garb. Unfortunately for all of us, he saw his shadow and the result was a long, cold, wet spring. 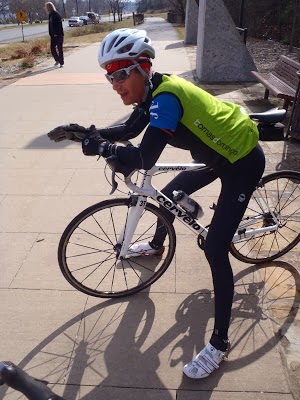 Fairweather at the moment he saw his shadow. "Damn right it's spring, or I wouldn't be here." file photo from 2013

I caught up with Jones on the cold and rainy Sunday of Groundhog Day, knowing that a groundhog named Phil had already seen his shadow, predicting weather-related for Pennsylvanians for 6 more weeks.

JB: "Fairweather, have you been outside today?"
FW: "Yep, JB, I have."
I was taken aback at his boldness on such a day, and assumed that Mrs. Jones must have run him out of the house.


And there you have it. Bundle up for now, but my expectations have been raised for a warm and sunny spring. Damn, I hope so.
Posted by JBar at 7:03 AM