Along The Trail: Crowds and Some Destination Meandering.

It appears that winter's grip on central Arkansas has finally been broken, and nowhere was that more apparent than on the Arkansas River Trail on this past Sunday. The temperature rose into the 60's as runners, riders and walkers took the opportunity to emerge from their hibernation and make a squinty-eyed return to sunshine, expose a little chalky skin, and soak up some warmth. 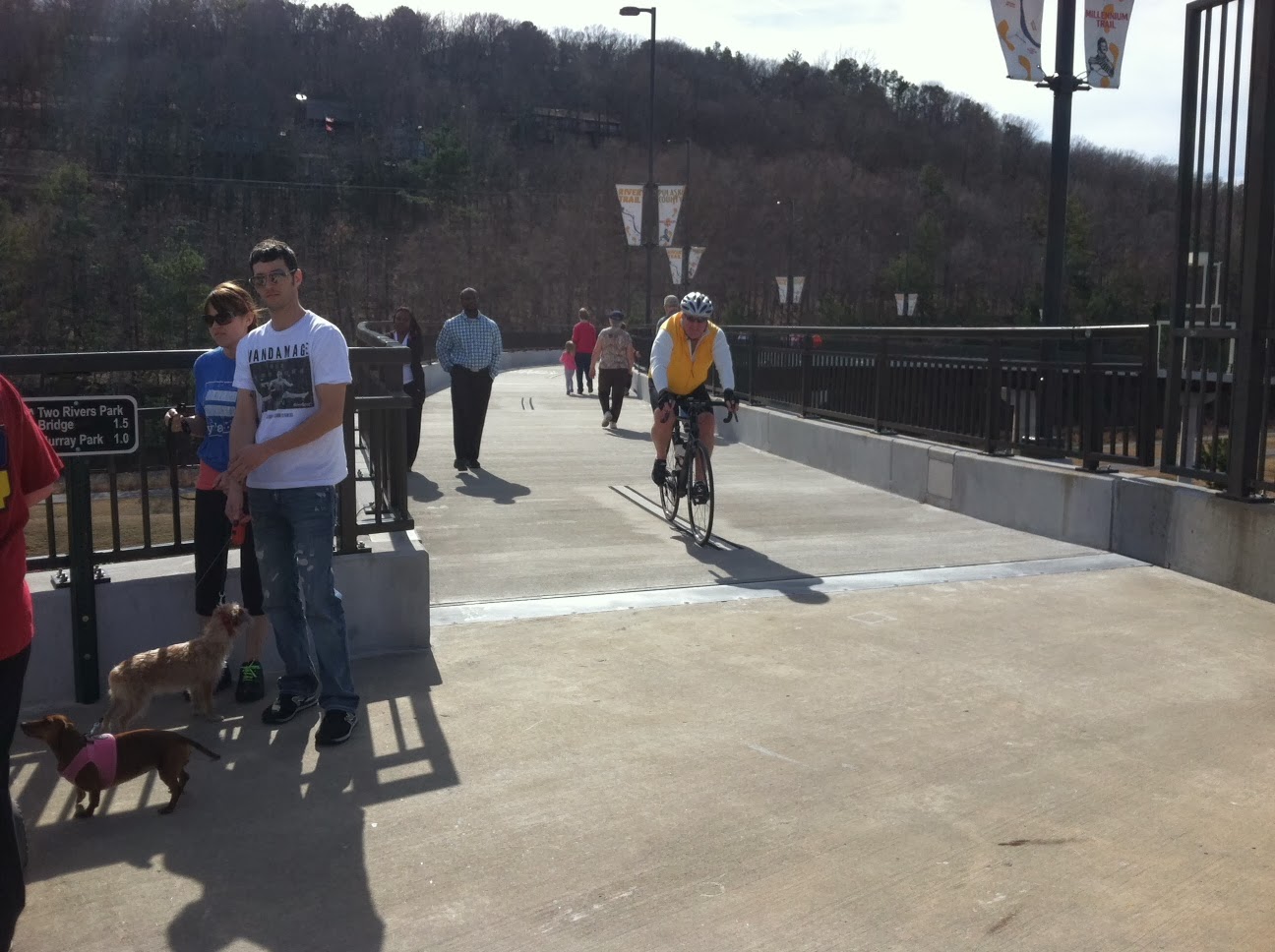 Enthusiasts of all persuasions flocked to the River Trail last Sunday.
Be alert, be polite, stay right
There were quite a few small packs of riders out on Sunday. Diane and I were meeting a couple of buddies and our group number grew even as we met and decided on an initial direction. The many group rides that make use of the trail system will be ramping up with the lengthening days, as will the numbers of other trail users. The communities seem to be maturing, as the more enthusiastic (read:faster) groups tend to use the River Trail mainly as a conduit to the open road, while walkers and runners who regularly use the RT avoid conflict by staying to the right and remaining alert.
Most conflict arises on days when crowds of casual users flock to the BDB area and Two Rivers Park, often bringing with then unrealistic expectations of solitude and nary a clue as to the etiquette of shared use trails.
Let's remember to mind our manners and have mercy on the unenlightened. Ignorance can be cured by way of gently delivered information; however, a sharply barked "on your left" can piss people off. The message may be proper, but the manner of delivery can determine whether it is received defensively or with an open mind.

Traffic Jam: Cantrell at River Mountain Road
Sunday was a busy day on the River Trail and that was evidenced by the fact that I received multiple reports/ complaints about traffic backed up on River Mountain Road as trail users attempted to leave the Two Rivers Park Bridge area. The traffic signal at Cantrell Road allows southbound drivers on River Mountain only 5-10 seconds of green light (I've timed it at 5, but 10 has been claimed), followed by a couple of minutes of red as the light cycles through various turn sequences, etc, for Cantrell Road traffic. One driver reported that it took him 20 minutes to get through the intersection on Sunday, as only 2-3 cars could clear the light from River Mountain with each cycle.
The problem at this intersection has been discussed many times at meetings of the Little Rock Bike Friendly Community Committee. Little Rock's Jon Honeywell has been consistent in saying that changes to the light timing would adversely affect signal sequencing all along that stretch of Cantrell/Highway 10, an area well known for being a traffic nightmare as it is, so they are not willing to make changes.

The area is under study for redesign and I've seen little to indicate that any new design will be more accommodating to non-car traffic as the road is widened to 10-11 lanes at the intersection. Designers won't pay much attention to the needs of the nonautomotive as they make way to accommodate urban sprawl, and then they are sure to say "too late" when their plans are criticized.

As the season ramps up and longer weekend rides become the norm with my little ride circle, a pattern emerges. Saturday rides are usually somewhat challenging. On Sunday, though not a day of rest, some of us like to dial it back a notch. We'll still log some miles, but the pace is slower and the attitude relaxed. Sometimes we'll finish up with a coffee stop, a late breakfast, or, when appropriate, a cold beer. If the last of those options appeals to you, let me suggest that you check out Stone's Throw Brewing at the corner of 9th and Rock Streets near MacArthur Park in Little Rock. The local beer is very good and they have varieties for most tastes.  I found the Two Timin' American IPA to have the hops I was looking for, and the crew is bike friendly with an exclamation point! They not only allowed us to bring our bikes inside, but customers who walk or ride to enjoy a brew are given a small discount. 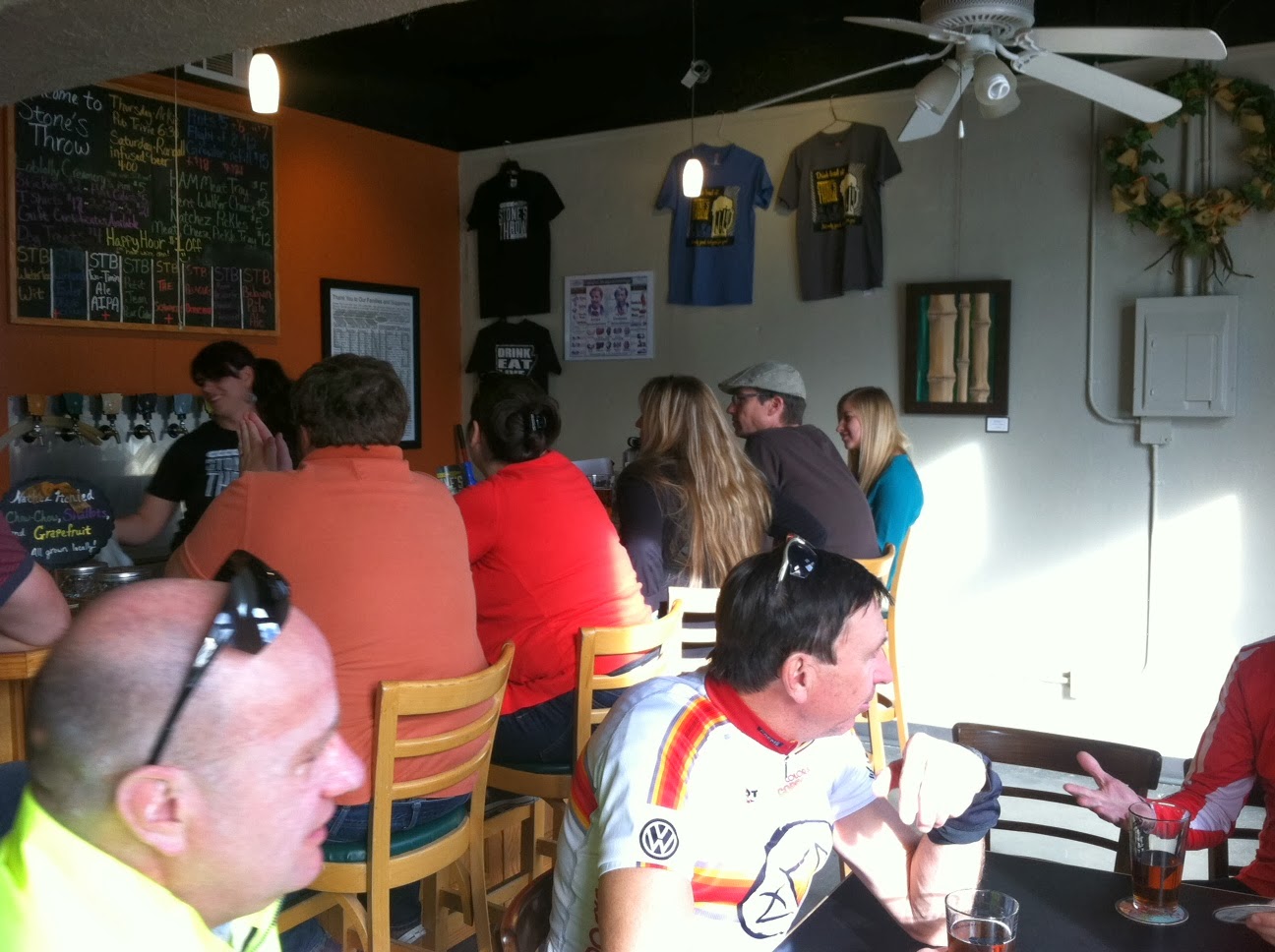 The beer is good, the atmosphere is relaxed, and the folks are friendly at Stone's throw. 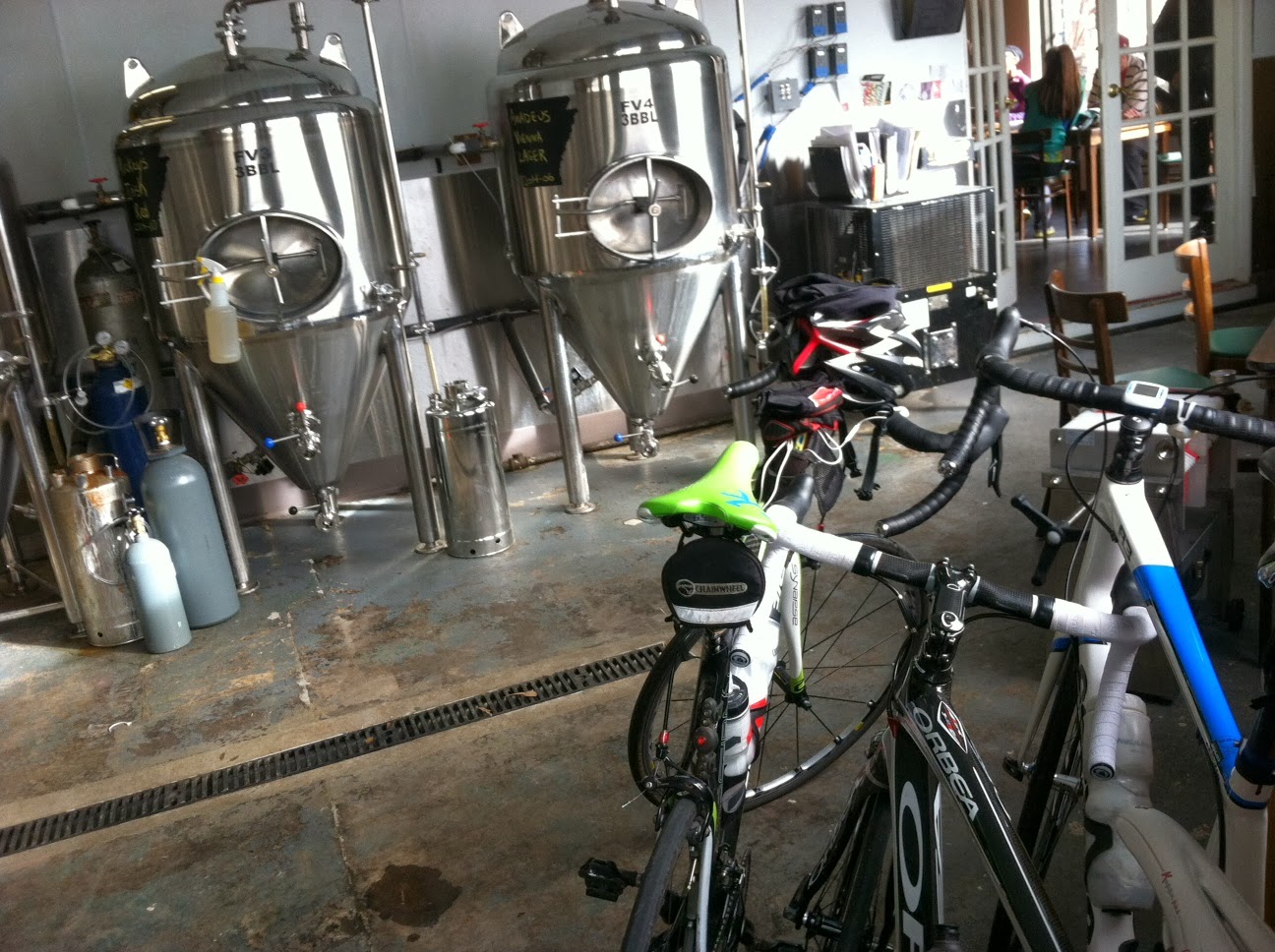 Indoor bike parking in the production area. They have ambitions of getting a bike rack, but the current arrangement is perfect. I don't like leaving my road bike on the street.


Remember to partake responsibly. Unless you've got a rickshaw and a designated pedaler, you're going to have to ride home! Be safe.
Posted by JBar at 10:43 AM

Some good thoughts and info in this article, John! I would also like to urge cyclists to exercise a little bit more patience and caution when navigating through the crowds at Two Rivers and the BDB. The "3 foot passing rule" could also apply to cyclists when passing pedestrians on the trail.

I was out at Two Rivers with my kids on Sunday afternoon and witnessed several cyclists riding pretty fast and passing pretty closely to the other trail users. It was like they couldn't even be bothered to slow down when passing or approaching other people. It would only take a split second of inattention by a pedestrian or a sudden, unexpected move to cause some sort of bike/ped collision. That would result in 2 injured and pissed off people, both of whom would think they were "in the right."

So please, please, please, slow down when passing people, and give adequate room in case they do something unexpected. Like JBar said, the Two Rivers corridor & the BDB should really be considered conduits to the open road so please ride accordingly. Please show some restraint, caution, and patience in these areas, and wait to open up the throttle until you are somewhere less populated.

I agree with Cliff. I'm an avid rider and I've left similar comments on here before, but from what I've witnessed and, regrettably, done myself, I find that cyclists by and large pass pedestrians in a very dangerous manner. These are the same cyclists who get upset when motorists pass dangerously. As a group, we've got to learn to exercise patience and caution (you must both slow down and give ample space) if we expect to get it in return.

Good article John,your comments about the trail and River Mtn. rd. are spot on.
If you ride up RMR to cross Cantrell
you have a dilemma, you either cross on the faded left side crossing - if there are no vehicles going your way to trip the signal-and lift your bike over
the little traffic island on the other side to get marooned or cross behind a car on the right-hoping a right turning vehicle doen't cream you.
I hope in the new layout that a flow obsessed traffic engineer can find a way to allow safe passage for peds and bikes.
Perhaps just a properly marked crossing on the right would do it.

Nice article, JB. Thanks for the diplomatic, all-too-kind comments about groups. The only consistently polite group I have ever encountered, and I ride a couple hundred miles a week, 5- 6 days, is the Major Taylor group. Most others assume they are the only ones on the path or road.

Also, ditto on Cliff's and Matt's comments above regarding safety and consideration of others by cyclists.