Jeff Caplinger reports that the Burns Park mountain bike trails have been cleared as of Sunday. That's great work and our thanks go out to all involved.

I ventured out to the Burns Park mountain bike trails late Friday afternoon to scout things out after getting a report of numerous trees down on the red and green trails. It was no surprise, as pines were hit hard in the recent heavy snow and there were already some obstacles resulting from recent high winds. I had less than an hour before dark and only had time to ride the green trail, but found that while it was evident that trail crews had been at work, there was still work to be done at that time. 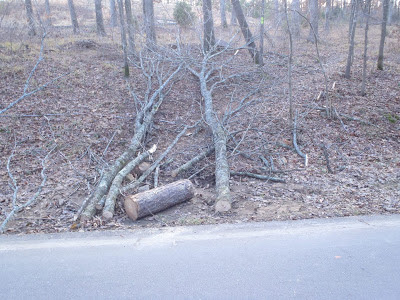 Good news, bad news: Trees had been cleared from the road, but had piled on the green trail at the crossing. 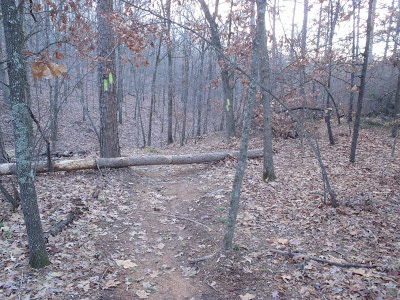 Though a lot of clearing had been done by Friday, there were still plenty of scenes like this one. 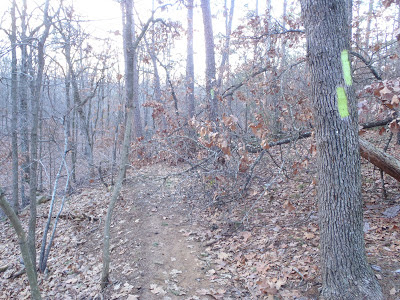 This mess required a little bushwhacking to bypass.

Here is Jeff's post on NLR trail conditions, including a shout-out to the folks who worked hard so that others can play! The Red and Green trail surfaces are in good shape, with minimal mud and a few small water crossings. As usual, much of the yellow trail lowlands will be a mucky mess, so avoid it.

UNPAVED and NATURAL SURFACE TRAILS - I heard from our work crews this morning - "After a combination Master Naturalist/Burns Park Mountain Bike Group workday, the Red, Green, Blue, White, and Orange Connector trails have all been cleared of downed limbs and are ready for travel! We did not clear the Yellow Trail because it is so wet at the moment. On Saturday while we were working we had all users groups on the trails—bikers, equestrians, joggers, hikers, ..... This thing is coming together!

AMN plans to work on Pfeifer Loop sometime next week (probably Tuesday or Wednesday). Will let you know when that one is clear. We hear it is a disaster area, but I haven’t looked at it yet."

Thanks to the Central Arkansas Master Naturalists and the Burns Park Mountain Bike Group for the quick trail clean  & look forward to their report on the Yellow and Pfiefer trails.

More Work Stations: Help Decide Where They Go!
North Little Rock is set to receive 3 work stations similar to those at the BDB pavilion, and Two Rivers Park.You can help decide where they are installed!

Allsopp south side is clear.

A lot of Pfiefer Loop is clear as well. There were 3 crews out working yesterday and all is clear except for part of the southern portion.