No, that's not the hook from your second favorite Lynyrd Skynyrd song, it's the law!
As most cyclists, but few non-cycling motorists, are aware, it is illegal for a motor vehicle to pass a cyclist closer than 3'. Here is the applicable code:


(a) The driver of a motor vehicle overtaking a bicycle
proceeding in the same direction on a roadway shall
exercise due care and pass to the left at a safe distance of
not less than three (3) feet and shall not again drive to the
right side of the roadway until safely clear of the overtaken
bicycle.

There has never been a ticket issued under this 2007 act, even in cases where cyclists have been struck and killed while lawfully operating on a public road.

On Wednesday, January 16, NLR Fit2Live coordinator Bernadette Rhodes announced a public awareness campaign to inform drivers of their responsibilty under the law. 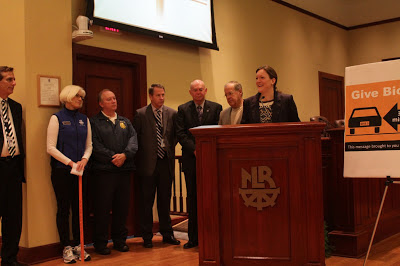 Bernadette Rhodes announces NLR's awareness campaign at City Hall as other officials look on. City Council member Beth White holds her "family yard stick" to give graphic meaning to the idea of 3 feet. 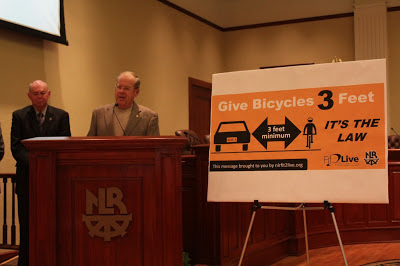 NLR Alderman and avid cyclist Charlie Hight expresses his support.
I was pleased to see the support for this program from other city officials, including police chief Danny Bradley, Aldermen Steve Baxter, Beth White, and Charlie Hight, along with Mayor Joe Smith and representitives of the NLR Fire Department and the parks department. Though long-time Mayor Pay Hays has been replaced by the newly elected Joe Smith, I don't see North Little Rock slowing down in its support of healthy lifestyles in general and cycling in particular. Mayor Smith has repeatedly stated that he believes that such initiatives help bring young, educated, employable people to the city. While he is not a cyclist as was Mayor Hays, he is an ecomonic development guy who recognizes the value of quality-of-life projects in bringing positive growth to our city.
﻿ 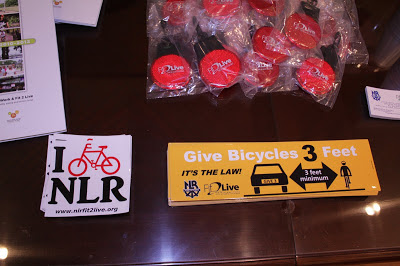 The campaign will include bumper stickers, yard signs, and billboards.
North Little Rock continues to do a lot for the cycling community, with infrastructure projects like the recently completed Highland Trail, repair or repaving of the River Trail, and the rapid response in clearing trails after the recent winter storms. I expected fast action on the River Trail, but was really impressed with the speed with which crews from NLR Parks and volunteer groups cleared the Burns Park and Pfeifer Loop mountain bike trails. Bernadette and Charlie Hight are also leading the committee working to try to get a Silver Level Bike Friendly Community award from the League of American Bicyclists. NLR earned bronze two years ago and much has been done since then.
Posted by JBar at 2:15 PM

Awesome!!! NLR is so awesome.
The part about noone ever being cited and the if you kill a cyclist "fine not to exceed one thousand dollars $1000" is a little disturbing. At least there's civil court.

How does one go about obtaining these stickers and such?

How and where can I get one of the "I bike NLR" stickers?