Weather, politics and Christmas (as close to religion as I'm going!)

Weather is usually the only completely safe topic, but here we go!

Neither rain nor sleet nor dark of night...

Well, you can see where that attitude got the United States Postal Service. I think of myself as a pretty hardy cyclist where weather is concerned and, as validation of that premise, I consider the many days that I've crossed the BDB with nary another soul in sight. There are certainly people out there who can make me want to huddle with my binkie with their frozen haired tales of commuting determination, but I'm a warm-blooded creature and ride for fun, so I do have my limits. Any heat that Arkansas can throw our way is manageable, and headlights can lengthen short winter days. I don't like cold or wind, and I especially don't like cold wind, but I'll put my head down and ride. I don't start rides in the rain unless I'm belittled, abused and called a girlie-man by some of my good friends, and that has happened fairly regularly over my riding career, now that I think about it. That makes me consider whether I should just HTFU and ride or get some better friends. I'm getting a little off track, but I'm circling around to the fact that riding conditions have been downright miserable. After joining the CARVE ride Saturday morning, resignation set in that we were in for a few days of rain. By Tuesday, the rain had been removed from the forecast, but we woke up to this Wednesday morning: 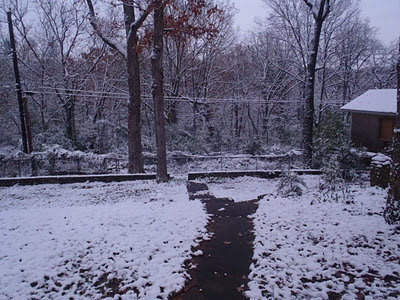 This doesn't usually bode well for a ride day, but it turned out OK.
I really don't complain too much about Arkansas weather, because there is seldom a week in which we can't get in a couple of reasonably comfortable rides. I managed an hour on the bike this evening and feel all better! It was pretty cool, but clear and not too windy, and the near-full moon was already high in the sky. 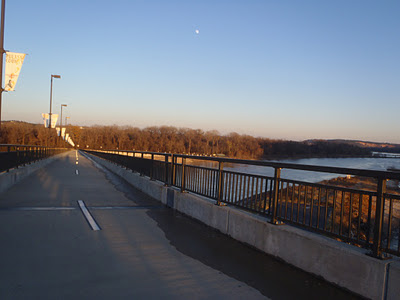 The BDB was not too crowded! The sun melted the snow, but there was a strip of ice lurking in the shadows.
I think I passed four riders  and saw a couple of more, along with a few runners and a dozen or so walkers. If you want some solitude on the trail, this is your time! Other than a few puddles and some dirt and sand washed out near the rock quarry, the NLR River Trail was clean and in good shape.
﻿
Cyclocross
My respect goes out to those proud folks who rode the Jingle Bell Cyclocross Race on Sunday at Boyle Park. I planned to go by for photos, but should have checked my information, as I drove to Kanis Park. On seeing the empty park, I headed home, with my error dawning on me moments later, but by then I was just ready to slink back to the dry comfort of home. You seldom see a forecast that simply calls for "continuous rain".
The Arkansas State Cyclocross Championships will be this Sunday at Burns Park. It looks to be clear and cold, so bundle up and head on down! Last year's event was big fun and some very exciting racing, with homeboy Noah Singer taking the win on the last lap.
More news: NLR Mayor Pat Hays(maybe) not running for re-election
From the Arkansas Times blog reports emerge that Pat Hays will not seek re-election in 2012, a report that Hays mildly disputed. While I've had my share of disagreements with Mr. Mayor over the years, he has provided vision for the city and a steady hand. Nobody is going to make us all happy, but, on the whole, the City has shown progress under his watch. There are other several candidates in the mix, some mentioned in the article and some not, so this development bears watching. Mayor Hays, along with Pulaski County Judge Buddy Villines, has provided leadership and resolve in developing the River Trail system, so his status is relevant to the cycling community.
And speaking of making appointed rounds...
Christmas is almost upon us. If you're unwilling to count on the jolly fat dude to deliver gifts to the cyclists on your list, here are a few ideas:
SMALL STUFF
- Toe or shoe covers. If they don't have them, they need them! Same goes for arm warmers and knee warmers. Good stocking stuffers include gels and nutrition bars (See what they usually eat. Some of us are picky!), and it's hard to have too many red LED blinkies! If your bikes are all outfitted, they're great for clipping on the dog's collar or your pocket when walking after dark.  We can always use spare tubes, CO2 cartridges and other consumables.
You can never have too many socks. My favorite winter cycling socks are DeFeets Blaze.
BIGGER STUFF
Tights for cold weather riding. I also love my bib knickers. Many people have a hard time buying really nice bibs or riding shorts because they are so damned expensive, BUT, they are usually worth every penny. This can be a personal thing, but sneak a peak at your rider's current favorites, call your local bike shop and buy a better grade of the same brand. That way, you're pretty sure of the fit and, once again, premium bibs or shorts DO make a difference.
Head light-Bike lights are kind of like computers in that they keep getting better and cheaper. With current LED technology, you can get a compact 500 lumen light (that's bright!) that charges via any USB port for around 150 bucks. These lights can mount on handlebars or a helmet. Just a few years ago, that much light would have put you in the $500.00 range and would have required a heavy, remote battery pack that needed an overnight charge. You can still spend a lot more money and get a lot more light, but 250-500 lumens is plenty for riding the River trail or
for a morning commute. Consider more power for single-track riders.
So far, I've managed to avoid the stinkin' trainer and I hope you have, too. I know many of us are finding that we have time on our hands, as I've had a steady stream of nerd mail concerning the relative weights and attributes of various disc brake rotors. I didn't even know that sintered was a word.
﻿
Posted by JBar at 7:45 PM

I think USPS would be doing fine if they didn't destroy half the packages people ship. You can't trust those guys with anything.

Good that you have avoided the trainer so far...I've already put in 3 hours on it...