Along the Trail: An Expected Disappointment, Some Small Improvements

I don't think anyone held realistic expectations that the transportation grant for the "River Bluffs Trail Section" would be approved in the current political climate. Arkansas did get $9.8m for enhanced electronic driver notification systems for the Mississippi River bridges. I am awaiting the outrage from the legions of folks who regularly complain about spending for bike and pedestrian infrastructure as wasteful spending. Look for the letters to start appearing in a newspaper near you! After all, $10,000,000.00 (OK, I'm rounding for dramatic effect.) to tell drivers "traffic ahead" and "click-it or ticket", along with the occasional Amber alert, seems like a bit of a boondoggle to me. Well, OK, there will be no outrage, because nobody ever questions the hundreds of millions of dollars regularly slung around to support our national dependence on motor fuel.
The upside to the grant exercise is that the River Bluffs Trail Section project planning that has been done to date will give the City a head start should funds for such projects become available in the future. The downside is that if the funds never materialize, the significant planning costs could have been spent on some other approach to closing the trail gap.

Temporary Hazard: Improvement in Progress
A small improvement project is currently underway at what is arguably the most dangerous point along the Moronic Mile, that patchwork of parking lots, trail, streets, sidewalks and wrong-way riding that connects the Medical Mile to the River Trail near Junior Deputy Park. At the corner of LaHarpe and Cross, westbound riders must cross oncoming traffic lanes to gain the sidewalk in order to proceed to North Street before getting back on the sidewalk........etc, etc. If you're local, you know the spot. 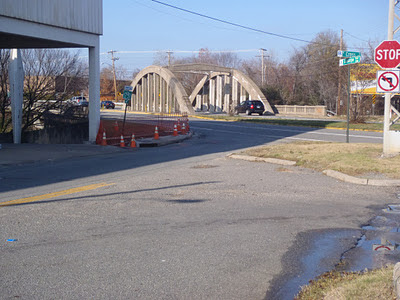 For the moment, westbound non-bunnyhopping riders on the designated bike route have little choice but to dismount and step into the oncoming traffic lane to get back onto the sidewalk. Traffic coming off of LaHarpe poses a hazard here under the best of conditions. 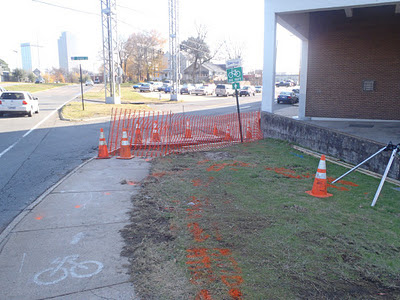 Eastbound riders at least have the benefit of moving in the direction of traffic and they have a better sight line to check behind on cars exiting LaHarpe.
The positive side of this is that the work is supposed to make the transition from street to sidewalk a little smoother, which is good news because this is no place to hesitate! The photos above were taken Friday afternoon and a city official to whom I spoke expected the work to be complete early next week. It is a small thing, but it demonstrates that the City of Little Rock is now paying attention.
Shout out to reader Richard Bassett for alerting me to this construction.
Temporary Hazard North: Progress 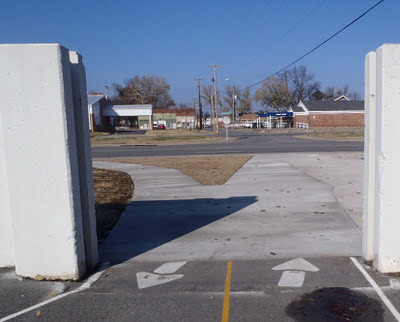 I reported last week on a void in the trail near the Clinton Park Bridge in North Little Rock. That little project is complete. Now, if pedestrians and riders would pay attention to the in-out arrows, safety at this point will have been enhanced.
Posted by JBar at 7:07 PM

Very good rant about the grant monies not going to the bike trail. I did not know that Arkansas received the Mississippi River monies. That was not reported by the Arkansas Democrat-Gazette.

Guess I need to move to NLR.

Arkansas did not receive all $9.8 million. It is split between Arkansas, Mississippi and Louisiana for the bridges over the Mississippi River at Natchez, Vicksburg, Greenville and Helena.