There was a nice crowd in Burns Park last Sunday for the Arkansas Super-Prestige cyclocross race, and the racing was hot and heavy. Due to an early morning mission, I made it to the event just in time for the "A" Race. The course looked difficult enough, with an appropriate variety of surfaces ranging from pavement to slop, and the usual barriers and changes in elevation. The Arkansas Cyclocross blog is the place to see the results and more photos. At some point, you'll also find information there on the upcoming season finale on January 15. 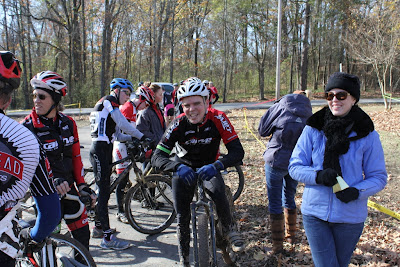 I missed the early race, but Patrick Emery's tired smile and muddy kit told the tale. 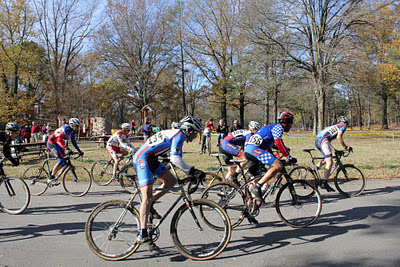 The "A" race start 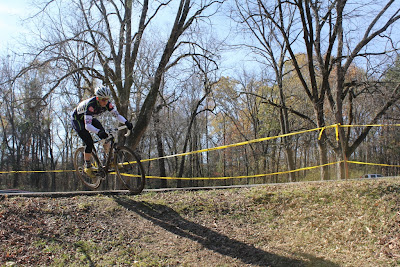 Riders coming across the pavement were getting a little air as this young lady demonstrates here. She hung with the front riders deep into the race. 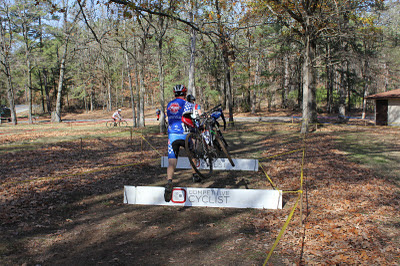 Richard Machycek raced on a hardtail Specialized Stumpjumper. It didn't seem to slow him down riding the course or running the barriers. 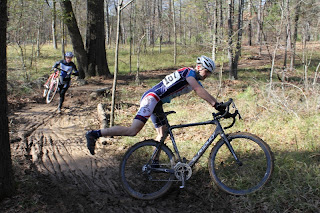 These guys were the eventual overall and Cat 3 winners. Stephen Erickson, Bikes of Tulsa, in the foreground, rode the muck and slipped off the course as overall winner Scott Walnofer, Snapple, elected to run it. Erickson was second overall.

I maintain that cyclocross is the most spectator-friendly form of bike racing, with the competitive but casual vibe and good visibility of the riders over most of the course, as is usually the case. Throw in a rowdy crowd, cold weather, and some mud and it can be quite the event.The cowbells were ringing and the crowd cheered on the riders on Sunday, but I will say that it lacked a little of the crowd buzz of last year's Competitive Cycling sponsored   Klein Rots Cyclo Kruis. The CC boys had the fryers going as they handed out frites and root beer. Any self-respecting Belgian would scoff at the keg of root beer, but it was Sunday in Burns Park and cyclists are all about minding the rules. Cyclocross is generally considered to be a slightly beer-soaked discipline, and though Arkansas cyclocross racing hasn't reached that state, it is great way to spend a few hours watching or doing some good bike racing with your friends. Look for info on the January 15 race. Maybe the venue will allow for beer hand-ups.
Posted by JBar at 10:30 PM

This post is mostly on target, but for clarification:

States actually had 9 more racers this year than last, in spite of Competitive Cyclist's move to Utah. Because of that move, Ryan Johnson could justifiably have chosen not to put on the race, but instead worked his butt off to put on a great one.

I guess I could have written that up a little better! Yes, the racing was probably bigger and better and Ryan did a fine job. In fact, all of the cross events that I've managed to catch were great. As the sport catches on, I hope the fields will continue to grow along with the festive atmosphere. Certainly no slight intended, and my apologies if it read that way. JB