Seasonal Rite, "Your Speed" on the BDB

It's that time of year.
I keep saying that our warm evenings are coming to an end, and now cool weather is making its move and freezing temperatures occurred overnight. We have had a few bonus days, but cold weather is inevitable. Knowing this, I took a few moments recently for one of my fall rituals....yes, the ceremonial Taping Of The Shoes. Road shoes are designed for maximum ventilation, which is absolutely required during Arkansas summers, but only adds to the challenge of keeping feet warm in the winter, hence taping the vents is an annual routine. 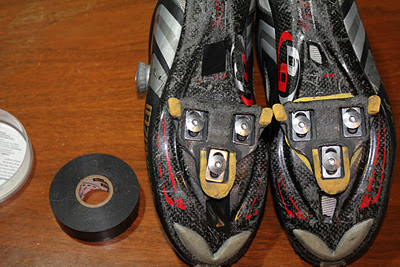 I know some folks use duct tape, but electrical tape does the job and doesn't leave adhesive residue when the tape is removed. 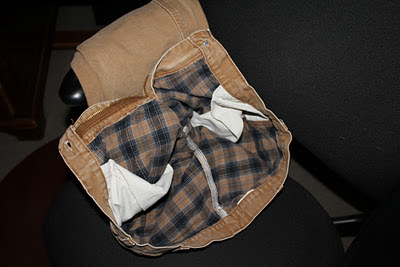 A few weeks after The Taping of the Shoes, I also move into my flannel lined Carhartts for the season.

Shoe taping is a melancholy affair, marking an immediate future of night rides and cold. On the other hand, the removal of the tape in the spring coincides with the joyous return of blooming dogwoods, short-finger gloves and bare legs. In all things, there is balance.

Watch your speed...
..because it appears that everyone else will be able to do so on the BDB. There is now a speed-indicating sign on the Little Rock ramp of the BDB. I was alerted to this development by the sharp-eyed Drew Moffitt and, though the sign is not yet in service, it promises to be a source of lively discussion. 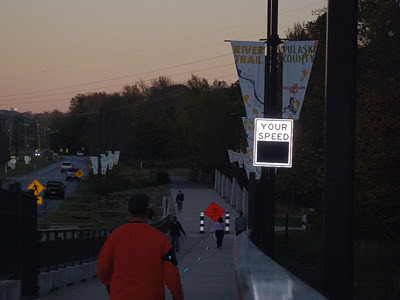 We assume that this sign is equipped with radar speed indication. Either that, or motivational messages like "YOUR SPEED really sucks".
I envision a wide range of reactions to the speed sign. Cranky people will stand around and scold riders, much like the 5 MPH lady who spent a few weeks standing on the bridge waving her arms at folks who she perceived to be breaking the posted 5-MPH limit, which means all riders and most runners. The difference is that now they will have a means of quantifying their displeasure. At the other end of the spectrum of radar sign fans will be those riders who will be compelled to try to  record a top speed. When the BDB first opened, the county set up radar to see how fast folks came off the bridge. A county official related the story of a cyclist that clocked at over 30 MPH, then stopped and asked his speed. When he got a report of 31MPH, he said, “I can do better than that”, and headed up for another run. I can imagine mail lists going abuzz with posts of ever-increasing maximum speeds for a period of time after the sign is activated. Maybe they'll turn it around and move it up the ramp for a while so we can have some climbing trials. I assume the sign is the county's, and I'll try to do a little follow-up so that I can provide a more informed report.

Email ThisBlogThis!Share to TwitterShare to FacebookShare to Pinterest
Labels: Taping of the Shoes; BDB radar

Would anyone complain if it pushed me to RUN faster on the bridge?

I guess the real question is could I run fast enough for people to conclude that I am, in fact, running.

Won't bother me if it's on the LR side. I hardly ever go down that side, I'm usually struggling to actual pedal up to where it flattens out!

If they ever get that sign up, BDB Sprint Contest! :)

Maybe it should flash "YOU'RE A DICK!" if you go over the speed limit.

Another good idea for winter cycling or any season, is carry your money in a Ziplock bag. That way it isn't soggy for shopkeepers and your phone is safe if it starts pouring rain. Saved my phone again the other day.

The radar speed device reminds me of some city years ago that thought requiring all bars and restaurants serving alcohol to have a coin-operated breathalizer machine on their premises to deter persons from consuming too much and then driving home. Within a couple of weeks, folks were trying to set new high scores and a couple of the bar owners were awarding gift certificates to new record holders as a means to boosting their sales volume.