..so light up.
Monday was the first day of our return to standard time. Other than the fact that the time change sucked, it was a great evening to get out on the bike, warm and humid with a steady breeze. I rode from the sub on a mission to visit each of the three bike bridges at their illuminated best. 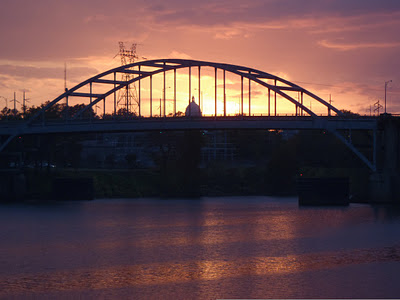 I prefer to be seeing this scene at the end of my ride, but the striking view of the sun setting behind the capitol and the Broadway Bridge has to be appreciated.
I had a light on my bars and a headlamp, and hooked up with a couple of other riders as we came off of Two Rivers Bridge. Having the two lights allowed me to light the path in front of me while looking around with the headlamp. I also benefitted from the redundancy when the battery on my bike light died during the course of my ride. After a loop in the park with my new friends, I circled back to a point in Little Maumelle Creek that is probably my favorite spot in Two Rivers Park in order to enjoy the view and take a few photos. As I rode back out to my point, I noticed a couple of deer at the edge of the trail to my right. As it dawned on me that they had come out of the thicket to my left, I looked up just in time to lock up both wheels as the third deer bounded across the trail. The deer are thick, so it's a good idea not to outrun your headlight. 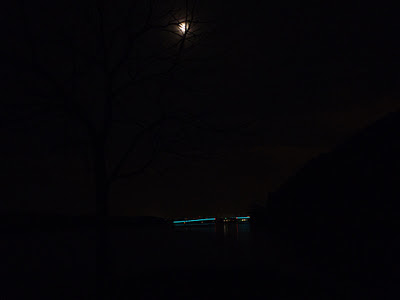 I had to stay pretty wide-angle to get both the moon and the bridge in this view from a point in Two Rivers Park. 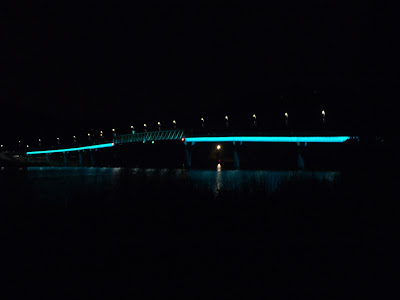 The Two Rivers Bridge lights are cool and there were a lot of people out after dark using the parks and bridges. I just wish that everyone would put on something reflective or use a light. 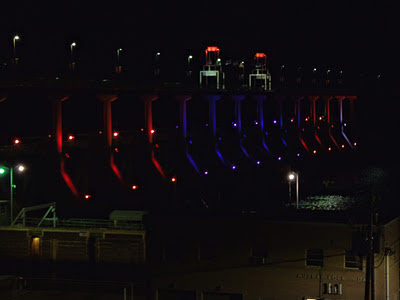 The Big Dam Bridge was in full disco light mode. 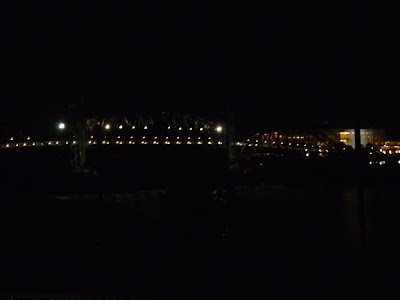 The Clinton Park Bridge was my third tour stop. With its bright white lights, it is not as photogenic as the BDB and 2RB, but it has its own charm.
While the BDB, Two Rivers Bridge and Two River Park were busy with walkers, runners and riders, the Clinton Park Bridge was abandoned. Its proximity to the well publicized crime problems at River Market and the many homeless folks who inhabit the area may prevent it from the having the feeling of safety that is pervasive along most of the River Trail system. That said, our trails are remarkably active after dark and riding at night is a very positive experience.
Posted by JBar at 5:29 PM

Hi JBar. I was one of the new friends you met up with the other night at twin rivers park. Enjoyed talking with you. Really like your blog.
Here is a link to my blog and some info and advice on lights.