I promised to explore some more dining options for riders so here is the next installment on that front. 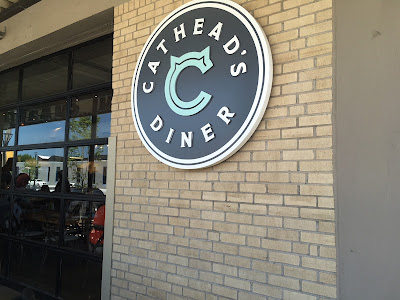 A cathead biscuit, as any southerner knows, is a big 'un. Head chef Donnie Ferneau is well known to central Arkansas diners, as he has created tasty fare for a number of restaurants in town, some more successful than others, but all with some flair. Pastry chef and head baker Kelli Marks is less well known to me, but, seeing as how I have a bit of a pastry problem, I may want to know more about
her. 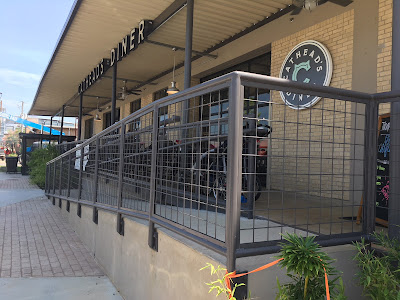 No bike rack, but the wide sidewalk and this handy fence in a very visible area should do nicely.

While I did not ride my bike for this exploratory lunch, I surveyed the area with a rider's view. The first thing I looked for was a bike rack, of which I saw none.  That said, riders should be able to easily hook up to a handy architectural feature.

The Food
The dining format is the blue collar working man's familiar "meat and 3", meaning that you pick one of the daily entrees along with three side dishes. Usually a couple of the entrees are offered every day, with another served on a rotating basis. We were there on Friday so catfish was in the rotation.
I had fried chicken strips, which were very good, along with fried okra, purple hull peas and jalapeno cornbread. My lunch buddy had catfish, greens, and …..well, something else I can't remember. He gave the catfish  "B", which I took as pretty high praise, but he pushed the greens away after one bite. "Sugary, too sweet. Who the hell puts sugar in greens?"
As I'm not a fan of greens, I've never cooked them, so I looked at a number of recipes from reliable sources. Some did include a teaspoon of sugar in 10 lbs of greens, but I will surmise that an abundance of sugar in greens must be a travesty, as is ANY sugar in cornbread. 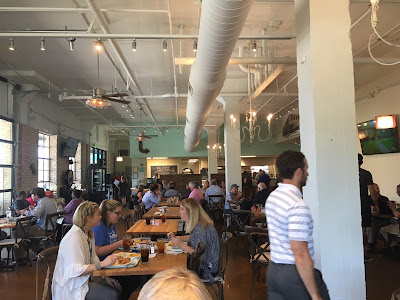 The joint was busy, but not overcrowded, and service was prompt; simply place your drink order and walk to the serving line

Like Lost Forty and many other converted industrial and warehouse spaces, the interior is a spartan mix of concrete, metal and glass, but the look was stylish, clean and comfortable.
The acoustics make for a loud lunch. "What? I can't hear you. It's loud in here." "I said, it's loud in here"  "What?" 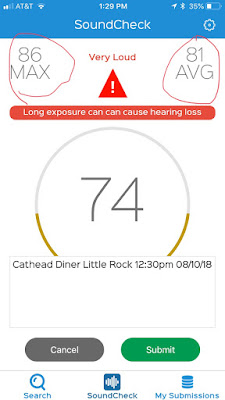 Don't expect to carry on meaningful conversation at Cathead's. It is reminiscent of the original Homer's on Roosevelt Rd.

As we walked outside, my friend mentioned that he had a sound measuring app on his phone so we stepped back in to quantify our impression of the sound level. Yep, it was LOUD.

The food was very good and I'll go back, though it seems that Ferneau tries a little too hard at times to add his touch to tried and true fare (re- the greens). Some things are best left alone, though I really liked the treatment of the whole fried okra, which had a thick crisp batter without a hint of greasiness.
We both opted for cornbread, so I'll have to make another trip to check out the namesake biscuits. Such is the burden of the blogger.


Yet another follow-up on Cook's Landing...

I've continued to have inquiries about the fate of the Cook's Landing Corps of Engineers site. I guess that some rumors have circulated due to the closing of the restrooms that the parking lot will be closed as well. That is not the case.
My experience has been that Corps folks are very careful in making any kind of statement, but I did get assurances that the area is not slated for closure. My contact had to check with a counterpart for verification but I got this information,

"The restroom facility the Corps operates is in need of some fairly extensive repairs which is the reason for its' closure.  The rest of the Corps facilities as well as facilities managed by local agencies are still open and will remain so."

The needed restroom repairs are being evaluated. 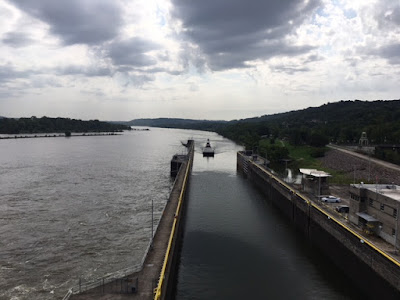 Coming through. Thursday morning was steamy hot with a silver blue sky, making for a near monochrome look.