Fort Roots Land Sale
A recent news item concerning the sale of a piece of North Little Rock city-owned land to the US Department of Veterans Affairs caught my attention and caused me a little concern.

Why I worry.....
While over the years North Little Rock has created and supported an enviable inventory of cycling and pedestrian trails, the current administration sometimes seems more than willing to allow encroachment on these trails. One example is the narrowing of the trail at the Rockwater development to create a "buffer" between the River Trail and the new homes constructed adjacent to it. What resulted was not a so much a buffer as a city financed free lawn extension to the homeowners. 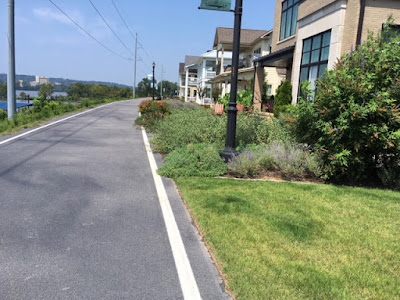 The stylish light posts sit well into the River Trail right-of-way. Every home has a private walk on the right-of-way, along with landscaping, sprinkler systems, etc.

I have no beef with the homeowners that have taken advantage of this virtual gift from the City. The City spent $96,000.00 to narrow the pavement and install underground wiring and decorative lighting along the trail. The money came from the sale of land to the AG&FC for a new boat launch ramp slightly upstream. Some time back, I got the plat from the County Clerk's office and estimated that, in addition to the cost of the improvements, several hundred thousand dollars worth of land was effectively given to the homeowners. Since the property is still legally city-owned right-of-way,  real estate taxes on that value are not collected from the homeowners.

Additionally, the City has removed striping of "designated shoulders" which served as de facto bike lanes along Rockwater Drive. They were not officially designated as bike lanes because parking along the street was allowed as needed, so I don't understand why we went to the expense of removing the striping. It gave riders and drivers at least the implication of protected space.
Parking places with signs have also been designated where parking was previously prohibited at the Rockwater Marina. There have been instances in which the River Trail was completely blocked by illegal parking on the trail at this location. These 2 spaces are, in and of themselves, unlikely to cause problems so long as everyone is attentive, but when a couple of cars are parked there it is likely to encourage others to think it is OK to park on the trail.
I mention these things because they kind of stuck in my craw and raised my suspicions where the City's actions around the trail system are concerned.  I covet our River Trail system and know that once even a small piece of it is gone that it is likely gone forever.

That said, the Fort Roots land sale does not seem to affect the integrity of the adjacent Highland Trail. The NLR Mayor's office provided the photo below showing the location of the land to be sold. 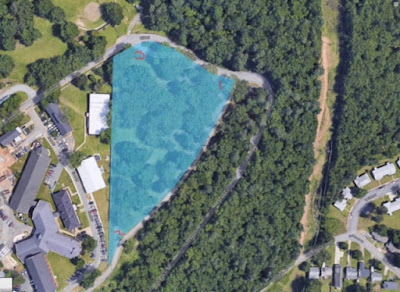 This is the plot of land being sold to the VA. The numbers coincide with the views in the photos below. 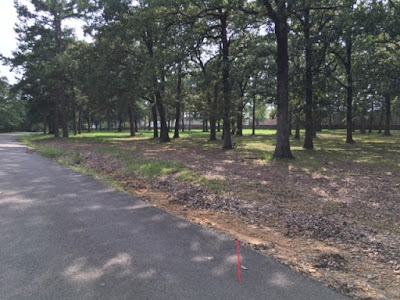 This is a lovely park-like green space. I hope the development doesn't start with the usual dozing of every tree. 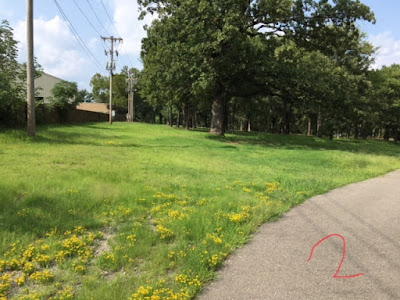 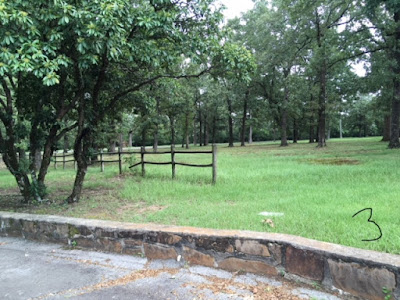 The 2.32 acres is being sold for $90,000.00 to allow for the expansion of a law enforcement training facility currently being operated on the Fort Roots campus. Judging by the large numbers of officers seen coming and going, the operation is well-used and will likely make good use of the expansion.
This project is obviously in its early stages and I will try to follow it as building plans emerge.

Good news on the horizon
I don't want to paint the City of North Little Rock with too broad a brush, as there are some very exciting developments coming to the north side of the river. I will report those when more details are available.

The Highland Trail was one of the last projects of long-time Mayor Patrick Hays and was the result of cooperation between the City and the VA to eke out the route between the VA property and the steep bluff line. 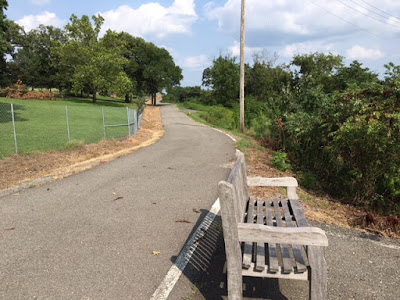 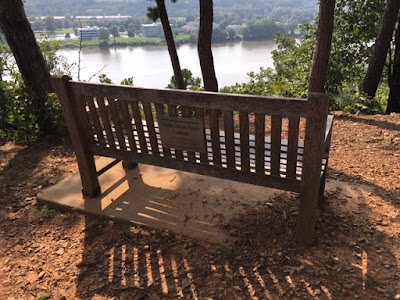 Several benches offer places to enjoy the views, the woods, and moments of quiet contemplation 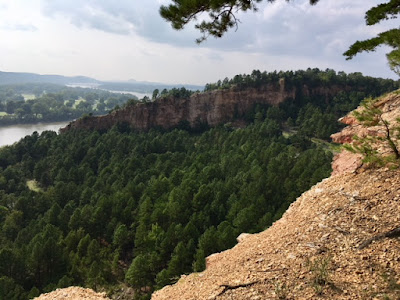 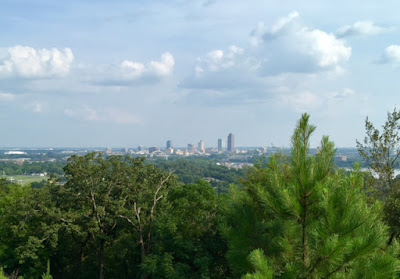 Even on this hazy August day, the views are striking.

The Highland Trail connects Fort Roots Drive to the older Emerald Park Trail and offers cyclists the opportunity to ride from one end of the bluffs to the other with a number of vantage points along the way. Though many of the views are hindered by dense foliage in the summer, from fall through spring they can be nothing short of spectacular.
Many riders remain unaware of this great addition to any climb of Fort Roots, as there are no signs to direct you. The trailhead is at the small parking area on the left as you approach the summit of the hill. Take that left turn and check it out. You'll appreciate your new discovery.

Random scenes from the River Trail 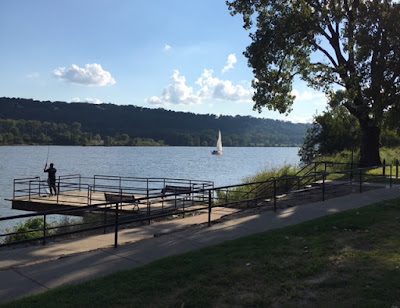 You seldom see sailboats on the Arkansas River but this intrepid sailor has enjoyed a couple of breezy days recently. Squirrelly winds, current, and a fairly narrow channel require attention. 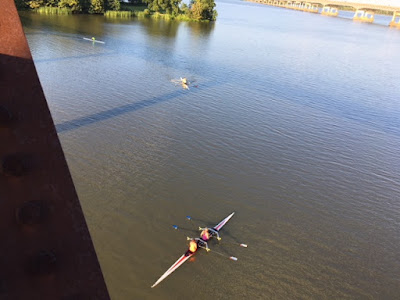 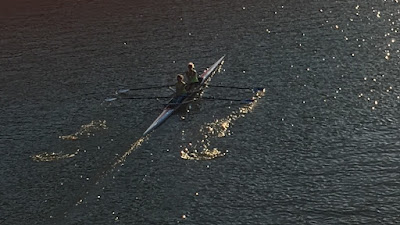 With the move of the Arkansas Boathouse Club to River Mountain Park on the Little Maumelle River, riders and walkers will be able to enjoy watching these sleek craft from the vantage point of the Two Rivers Park Bridge.

I want to give a shout-out to the airport and the Airport Commission. Rob Stephens of the Arkansas River Trail Task Force recently reminded me of their support of the Southeast Trail, the installation of bike racks, and the encouragement of cyclists to use the facilities of the airport. Next time you drop in for your Starbucks fix, bathroom stop, or water bottle fill, take a photo and tag the airport. They'll appreciate it and it can only lead to more good things on this oft used bike route.
Posted by JBar at 3:02 PM

Thanks for the updates!! Always appreciated and informative!