Thursday represented my latest "first road ride of the year" ever. The mountain bike has been a welcome diversion and a means of shedding some holiday gravy, but I'm a roadie at heart.


The BDB north access remains closed
The Arkansas River Trail from Burns Park to the Big Dam Bridge remains closed, and the gates on the north end of the bridge are locked. I'm told that it will be Wednesday or later before this section is cleared. 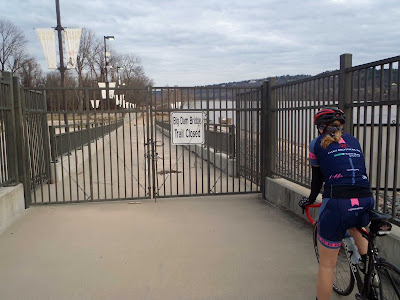 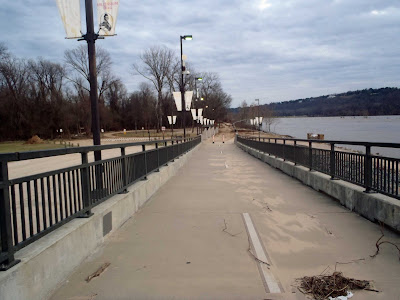 There are actually signs that some major trail clearing has been taking place at the approach to the BDB. The huge logs look to have been moved and there is at least a track through the sand.

There is obviously still a lot of work to be done ion the north side, and officials have asked that folks stay clear for their own safety as so as not to interfere with work crews. That said, I've received reports from explorers that say Pfeifer Loop is a total wreck, mostly due to the massive accumulation of sand. I'm sure that once a plan is in place, volunteers will once again come out to aid with the recovery.
The trail is open from Burns Park east to the sub, and all roads east of town are clear, including Faulkner Lake Road which was submerged for a few days.

Two Rivers Park is open and the trail is dry and clear. 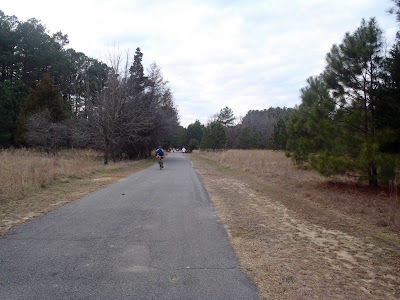 The trail through Two Rivers Park is dry and mostly clear. 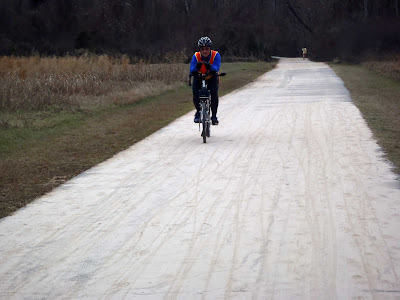 Some trail areas still have a coating of dirt that may turn a little ugly when wet, but this well-equipped cyclist ain't scairt. With a rear fender, nice big mirror, and "praying mantis" aero bars, he is prepared for whatever he may encounter.

We'll have to deal with some minor inconveniences when choosing routes for the next few days, but it is time to get riding.
Be Safe.
Posted by JBar at 2:00 PM

The following was posted on the Arkansas River Trail FaceBook page on Thursday (1/14/16) afternoon: "The trail from Clinton Bridge to the Shilcott Bayou Bridge is open now and will be this weekend. You can't go any further than the golf course once in Burns Park until at least next Wednesday."

As of noon on Friday (1/15/16), the barricades were up to prevent heading west on Tournament Drive from Championship Drive.

I recommend parking in the lot next to Shilcott Bayou and riding to the east.

As an alternative trip, take the Southeast Trail from the Clinton Library east to the Clinton Airport and then on to Terry Lock and Dam. About a 25 mile trip there and back. Almost zero traffic during the weekend.

The trail between Burns Park and the North Shore Business District has been reopened with expected weekday closings. See http://www.facebook.com/ExploreTheNorthTrails for more information.