Things are still a mess along the North Little Rock side of the river. I got out on my mountain bike on Saturday to scout around, and then followed up on Monday night with a ride across the BDB to confirm that the gates were still closed. 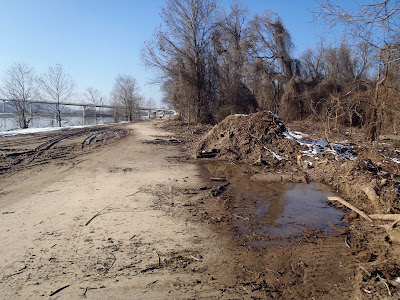 A lot of progress has been made in clearing the trees and debris near the BDB, but much work remains. 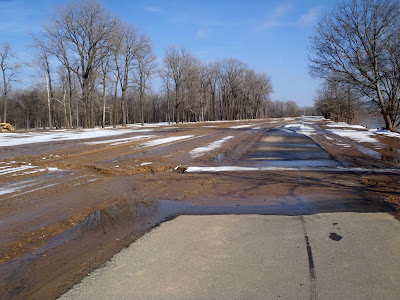 The silt has created large mud/sand flats in the park and along the trail. The NLR crews have learned a lot from recent experience and are spreading out or hauling off a lot of the sand to return the grade to normal. 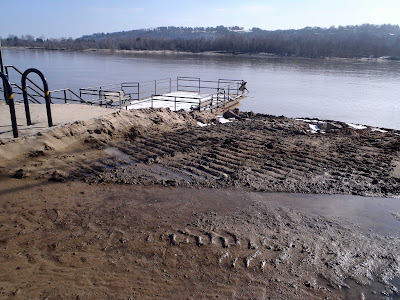 The silt goes from being sticky mud to hard-pack to fine sand. None of it is easy to move. 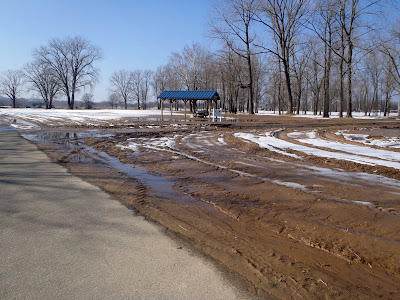 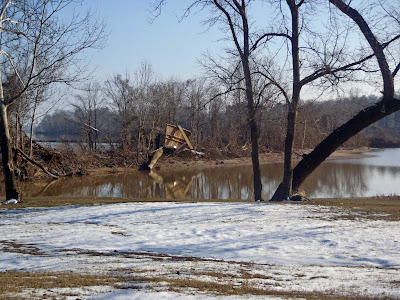 The ski platform at Victory Lake did not fare so well. 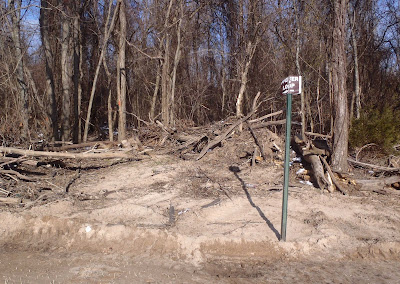 Ugly. And, as always, the debris piles are full of an amazing amount of litter. 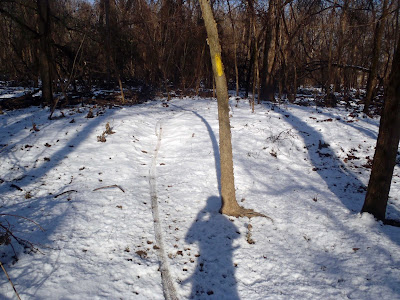 This shadowy rider made the only set of tracks in the Pfeifer Loop. It was not really as bad as  expected. The area closest to the river had the most debris and looked like a disaster. Behind the tree line, things were not quite as bad, but will still require extensive clean-up and rehab.

North Little Rock Parks and other department crews are hard at work to clean and repair the trail, but they have a long way to go. Things are expected to be back to normal within a couple of weeks and for now, the north gate on the BDB is closed "indefinitely". Typically, as soon as any viable route is open, the gates will be opened as well. There is a lot of equipment working in the area at this time.

Ride alternatives
As in the "not so good ol' days", North Little Rock riders are faced with driving or riding to the Little Rock side of the river or simply deal with riding open areas of the trail and Burns Park loops. Road rides east of town are always a possibility but do not lend themselves to quick evening rides due to to traffic. Once on the Little Rock side, Two Rivers Park is fully open, and there were only a few muddy spots on the trail Monday evening.

I admittedly don't get around much. There is so much to ride within minutes of home that I seldom venture outside of central Arkansas. On Sunday, with the trail a mess and local roads still thawing from the big Friday snow, and Camp Robinson closed and likely still snow-covered, I saw a mention on Facebook of the Iron Mountain Trails on DeGray Lake near Arkadelphia. I had heard good things so I threw the Niner in the truck and headed out I-30. I had only a vague idea where I was going, but in a little over an hour I was at the parking lot trailhead for the Orange, Blue, and White trails, and was getting good advice from the riders I met there. 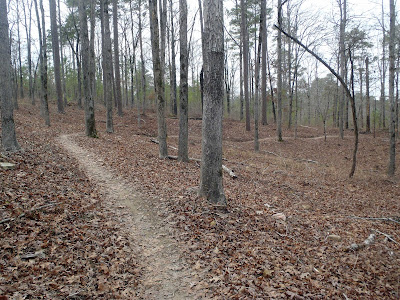 The pine forest makes for an open understory and the trails are smooth and flowy. 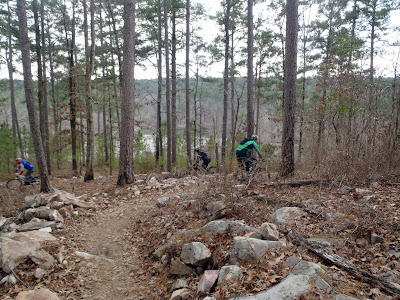 The new White Trail follows the shoreline of a peninsula into Lake DeGray for much of its length.

My experiences on mountain bike venues are pretty limited, but I'll say that Iron Mountain is about as good as I've seen in terms of trail surface, accessibility, and simple fun. I'm sure that there are more challenging sections, but the counter-clockwise trail direction that I rode on the Orange and White trails seemed have long stretches of flowing downhill followed by slightly sharper, short climbs. Advanced riders can fly through well banked turns while beginners can hone their skills and gain confidence while enjoying the scenery. A summer ride could easily include a break to dive into the clear water of DeGray. Iron Mountain is not news to local mountain bike riders, and I saw several Little Rock folks while I was there, but it was new to me. I'm eager to get back down there and explore some more.

I really enjoyed reading this blog. It is very nice and beautiful. Aerodynamic carbon fiber wheels allow the cyclist to reach a higher speed with less overall work, which saves energy as well.