Riders report that tacks were once again strewn along Barrett Road, this time in the area of the hill just north of Highway 10. I had been through the area a half hour before with no problem. I was lucky in that I passed before the tacks were dumped or simply had an opportune path.
I can only imagine what would motivate someone to do something so chickenshit. I imagine some 17-year old punk, awakening on a Saturday morning, agonizing over the fact that he is cursed with a tiny penis and that his acne is only getting worse. After watching some cartoons and eating his breakfast of Cap'n Crunch, he borrows his mother's car and picks up his buddy, who likely only hangs out with punk because he can borrow mom's car. Together, they plot the best gag ever, which is to go throw some carpet tacks on the road where good folks, with better lives and more ambition than these guys will ever have, ride their bikes. "Har, har, I gave somebody a flat tire....but I still have a tiny penis. I thought it would be better than this."

Good Deeds Along The Trail
Service Stop
In front of the Pinnacle Valley Restaurant, I noticed the Chainwheel tent set up and a cooler of ice water set out for riders. I stopped in and found Bill at his work stand busily going over a child's bike as a road rider waiting to have his over-shifting front derailleur looked at. 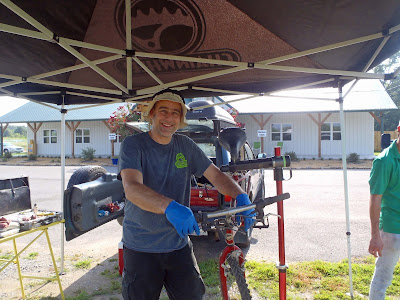 In spite of the heat, Bill was having a good time being out of the shop and among the people.

Bill said this is the second time they have set up to provide complimentary roadside service at this location, and Chainwheel will likely try to do it monthly. I consider things like this to be gifts to our community and to be a sign that out local shops are interested in doing more than just selling a bike. Thanks, folks!

Riding just a few miles up the trail, I came across a cluster of people huddle alongside the trail in Two Rivers Park. It didn't look good, and I at first assumed that it was a rider down. What I found was that a group of riders being led by Dan Lysk had encountered a couple whose Lab was suffering from an apparent heat stroke. Gino the dog, was a large, older retriever, and in obvious distress.They were about halfway between the bridge and the bathrooms on the trail with no easy way to get a vehicle in or Gino out, as he weighed about 90-100 pounds. Someone was on the phone to a vet as we tried to cool his paws and get him to take some water. I rode up to see if we could remove the bollard near the restrooms to drive in, and called some of my contacts to see about getting a key after finding it locked.
By then, a plan had been hatched. Lisa Bush's car was at the park and she had a sheet, which was put into service as a makeshift stretcher. 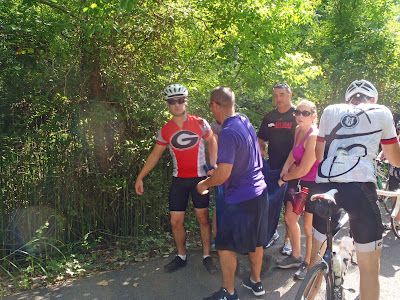 Gino was already doing a little better by this point. This were not looking good for him a few moments earlier.

As we cleared the way for the litter bearers, we ran into another long-time Chainwheel mechanic, Eric Blaty, who was riding with his boys, pulling a tag-along and a trailer. Dan had mentioned that perhaps we could find somebody with a trailer, and when Eric heard the situation he said, "I've got a baby in there, but we can take the dog." His youngest, Easton, was soon bouncing down the trail on the shoulders of a good Samaritan and Gino was getting a smoother ride. Those Chainwheel guys were earning good deed points today! 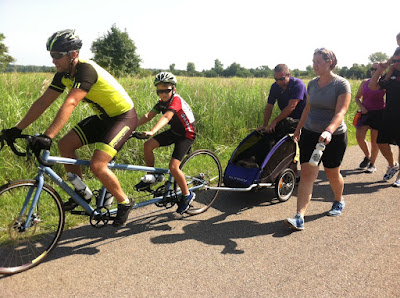 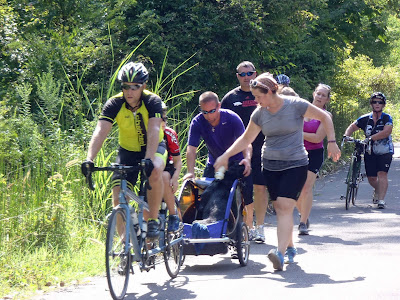 The doggie ambulance in action. 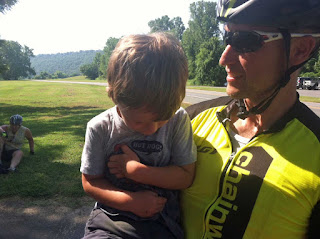 Easton heroically gave up his ride in the luxury coach to Gino, and then was shy about getting his photo taken in his very apropos "Hot Dog" t-shirt.

Dog days are not good days for dogs to be out for exercise.
People who know us know that we are dog lovers, as are Dan Lysk, Addie Teo, and most likely all the other folks who stopped to help, so we were very disturbed by the sight of a dog in such dire straits. It has been reported on local news that at least 3 dogs have died due to heat while hiking with their owners at Pinnacle Mountain State Park this summer. Gino's owners said that he lived outside and was well acclimated to the heat, but dogs have very limited capacity to dissipate heat. Once overheated, they are in trouble. The temperature was already near 90, which is not terribly hot, but the dewpoint was 77, which is brutal. Our dogs always want to go wherever we go, so it is up to us to exercise judgement. On days like today, dogs are better off snoozing in the house.
Gino was sitting up and looking much better by the time the rescuers got him to his owners' vehicle, but I believe that he had a near miss this morning. 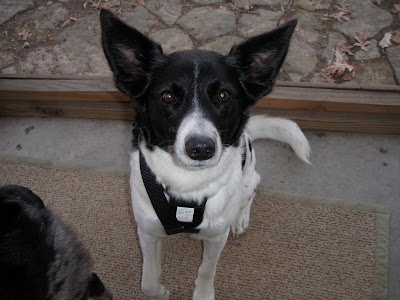 Update on Gino... we heard back from his folks and he is well now. Thanks all who helped, this was truly a team effort.

Yes tacks are very often problem to riders. You posted a very useful suggestive post thanks a lot.