One recent busy morning, my phone rang and an unfamiliar number appeared. I answered I my usual business hours manner, but got no response. After a couple of, "hellos", I hung up, only to have the number ring in again. This time, I was greeted by Pulaski County Judge Barry Hyde, who explained that he had been guilty of having taken a bite of his breakfast bar as the phone started ringing and was unable to respond when I picked up on the first ring. Such are the hazards of being a busy multi-tasker.

Hyde then went on to explain the he had been trying to call John Burton of the Pulaski County Road and Bridge Department. He realized his error when my contact information popped up, but was polite enough to call me back to explain.
Not being one to let an opportunity pass me by, I asked Barry if he had time for a few questions. He was quite gracious and we had a nice conversation on a few topics relevant to cycling in Pulaski County. The judge is a cyclist, so his experiences and impressions are mostly first-hand. 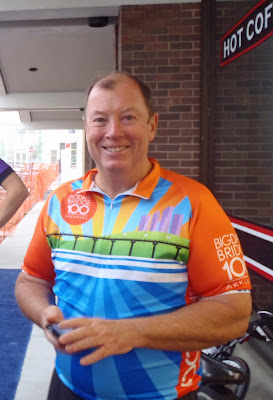 Pups, Poop, and Parties
First, I asked about his intent to close the bike-pedestrian bridges to dogs due to the continued problems with poop going uncollected by dog owners. He reiterated that this is a near certainty. Regular trail users and visitors complain, the situation is unsightly and unsanitary, and the regular cleanup required is expensive.  Threats and efforts at educating the offenders have not produced results, so a dog ban is likely to occur.
We also discussed nighttime closure of the BDB. I mentioned some of my trifling complaints about the weekend evening crowds- large groups blocking the bridge, cigarette and cigar smoke, and the litter left behind. The judge seemed to correctly consider these to be minor problems. The bad stuff happens long after most of our evening rides are done. When the area clubs close, party crowds move to the BDB to carry on. While drinking and smoking in public are both technically illegal, Hyde's bigger concern was the subsequent behavior that includes vandalism and throwing objects off of the bridge.This got some coverage in the mainstream media several weeks ago. It seems that a late-night closure is likely at some point, but Hyde noted that a 5:00AM opening time would accommodate commuters and early morning recreational users.

Smile, you're on camera
When the LED lights on the BDB were upgraded near the end of Judge Buddy Villines' administration, the project included the installation of surveillance cameras. After Hyde took the reins, it was pointed out that the cameras relied on memory cards and were not connected to the Internet. In order to retrieve data, somebody had to go climb a ladder and pull the cards. Needless to say, that was not an elegant situation, but there was no data service available at the bridge.
Hyde found that the City of North Little Rock was installing a high capacity data line for the Murray Dam hydroelectric plant, and worked with the City to tie in 16 live web cameras to that service. As a result, both the Little Rock and North Little Rock police departments can monitor the bridge cameras, some of which have IR capability. That is not to say that the PDs are monitoring the bridge with regularity, but they have the capability to do so as the need arises, and can also retrieve footage of specific times in the event of an incident. Response times of the police to the bridge have been somewhat slow, but the time of a 911 call can be used to seek evidence from the cameras.If you see suspicious activity that may not warrant a call, note the time. It may be useful later if suspicions turn out to be warranted.

I appreciated the judge took a few moments to visit and share a little insight. I consider Judge Buddy Villines to have been a visionary and his accomplishments are many, but on thing that Buddy lacked was a "wheels on the road" perspective. I perceive Judge Hyde to be an able manager with an eye to the broad interests of the county as a whole, but some of his view is from the saddle. That can't be a bad thing for our cycling community.
Looking forward
Pulaski County has applied for grant money with the goal of extending the River Trail to Pinnacle Mountain State Park. I have no idea what shape that will take, as the park itself is expansive and just getting to the park boundary would not get us very far. There have been discussions over the last several years of trying to develop a route through the park with cooperation from Arkansas State Parks, but that was beyond the scope of my short conversation with Judge Hyde. 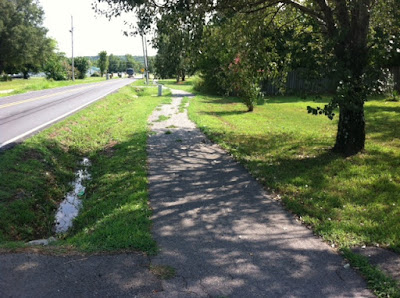 Not quite a bike path.
We were all excited a few years ago when it was announced that Pulaski County would build off-the-road bike paths to Maumelle Park. We were equally disappointed when we saw what was built. I'm confident that any future trail construction will be to a higher standard and actually give riders the option of getting off of the road. That would be good for us and for the local drivers.