Early spring here in Arkansas has thus far been a bit of a disappointment. For cyclists, that may be a bit of an understatement, as it had really sucked. We seem to have had very few nice days, and the few that have come along have mostly been during the week and prior to the time change. We've endured more than our fair share of cold, dreary weekends, late season sleet and snow, grey skies, and record low March temperatures. That is why the past Sunday was so welcome. A drizzly cool Saturday led to a warm, sunny Sunday that seemed to call every rider, dog walker, runner, stroller, and baby carriage roller to the Arkansas River Trail. 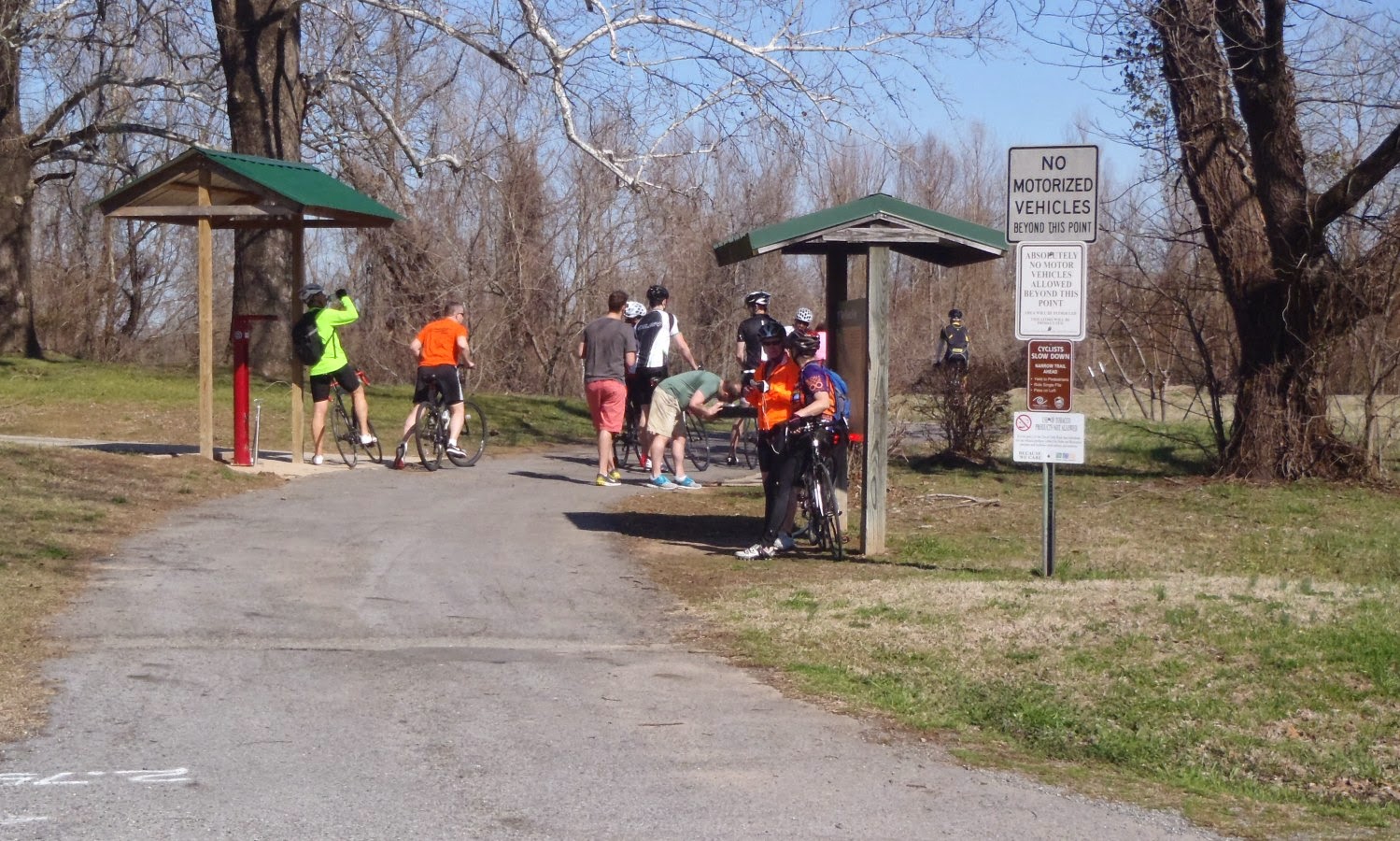 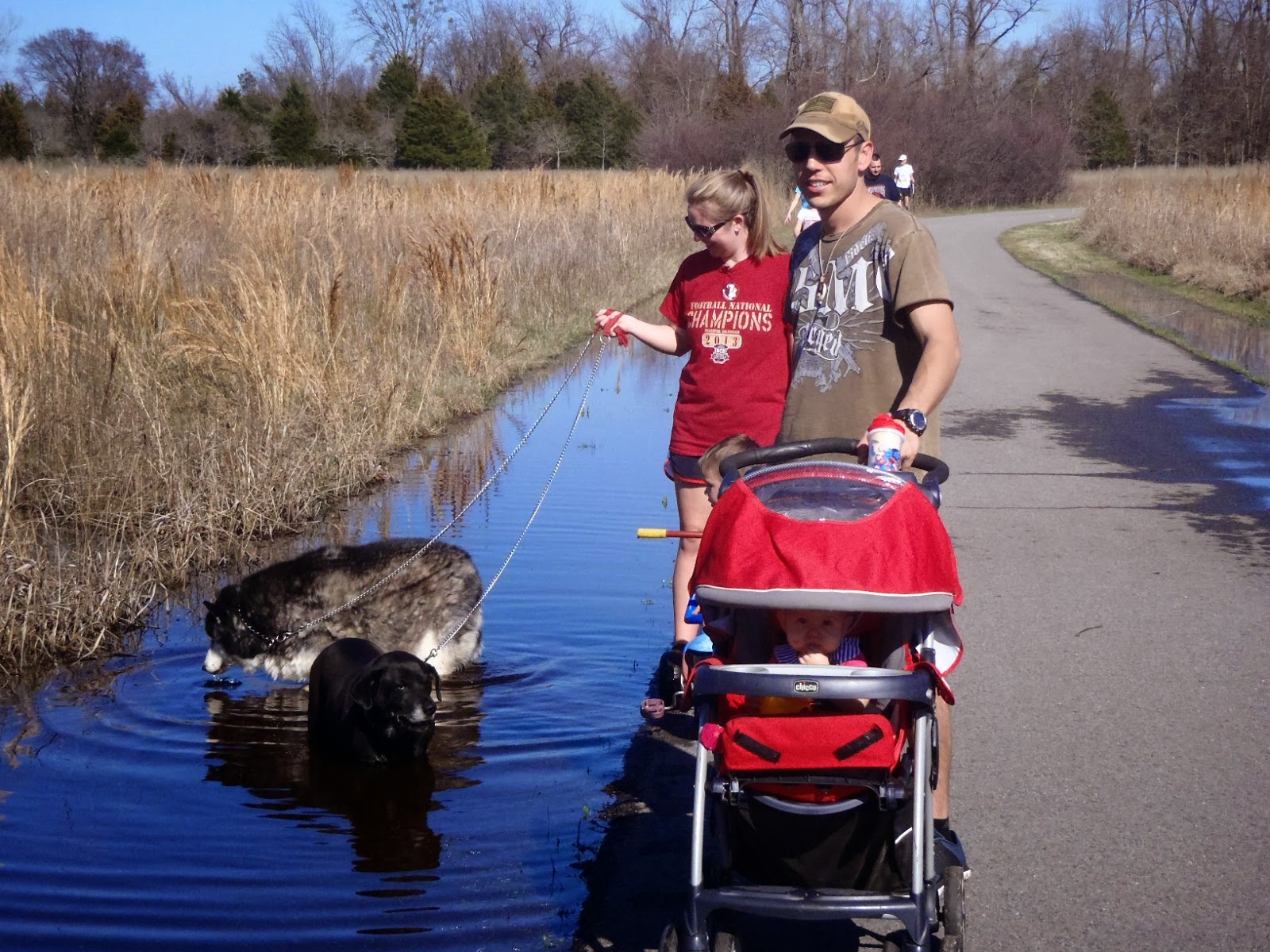 There was something for everybody to enjoy along the trail. 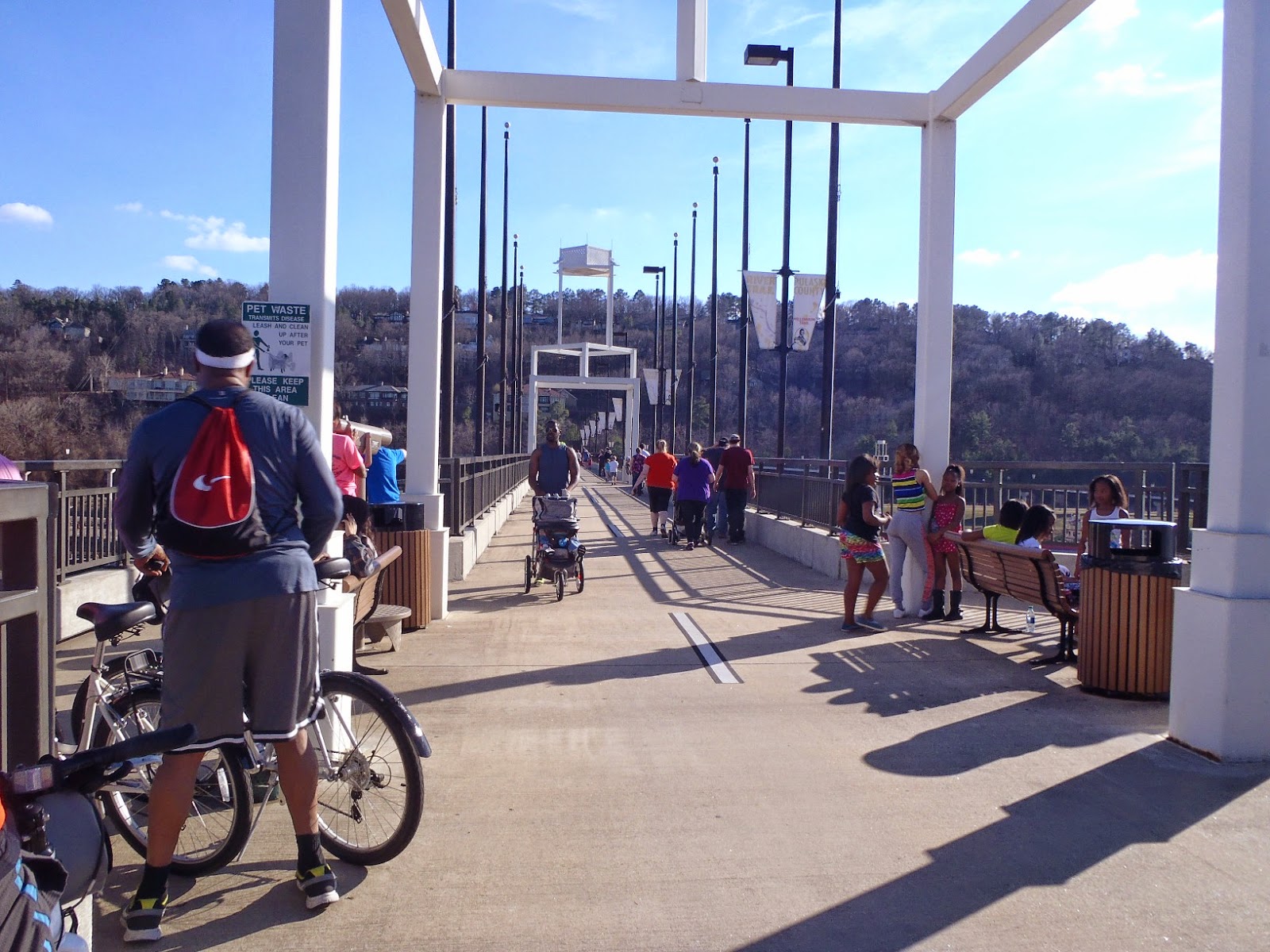 A perfect day on the BDB 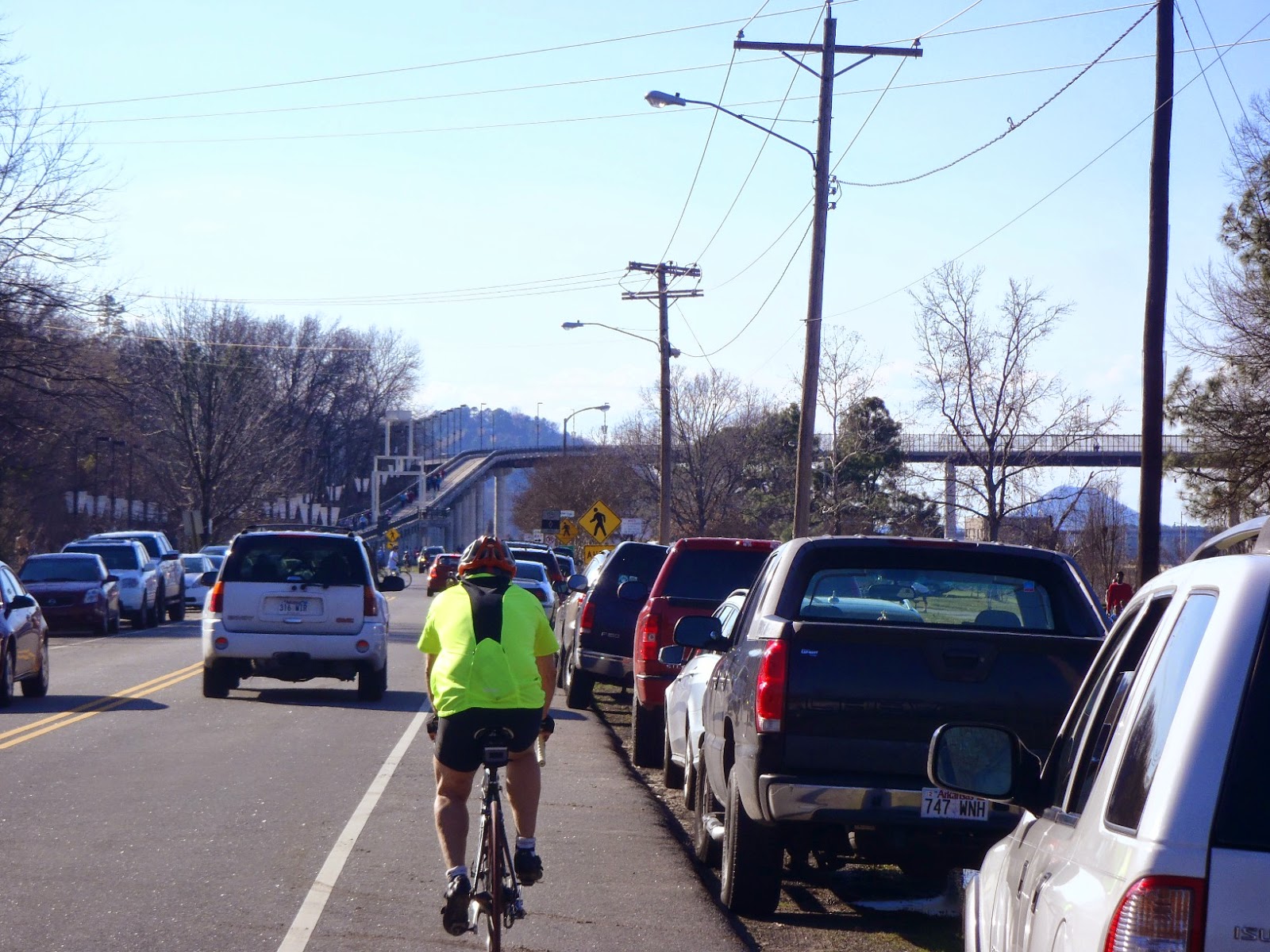 Parking everywhere along the trail was problematic. Near the LR side of the BDB, cars parked in the bike lane and along the road well past the Overlook turn. 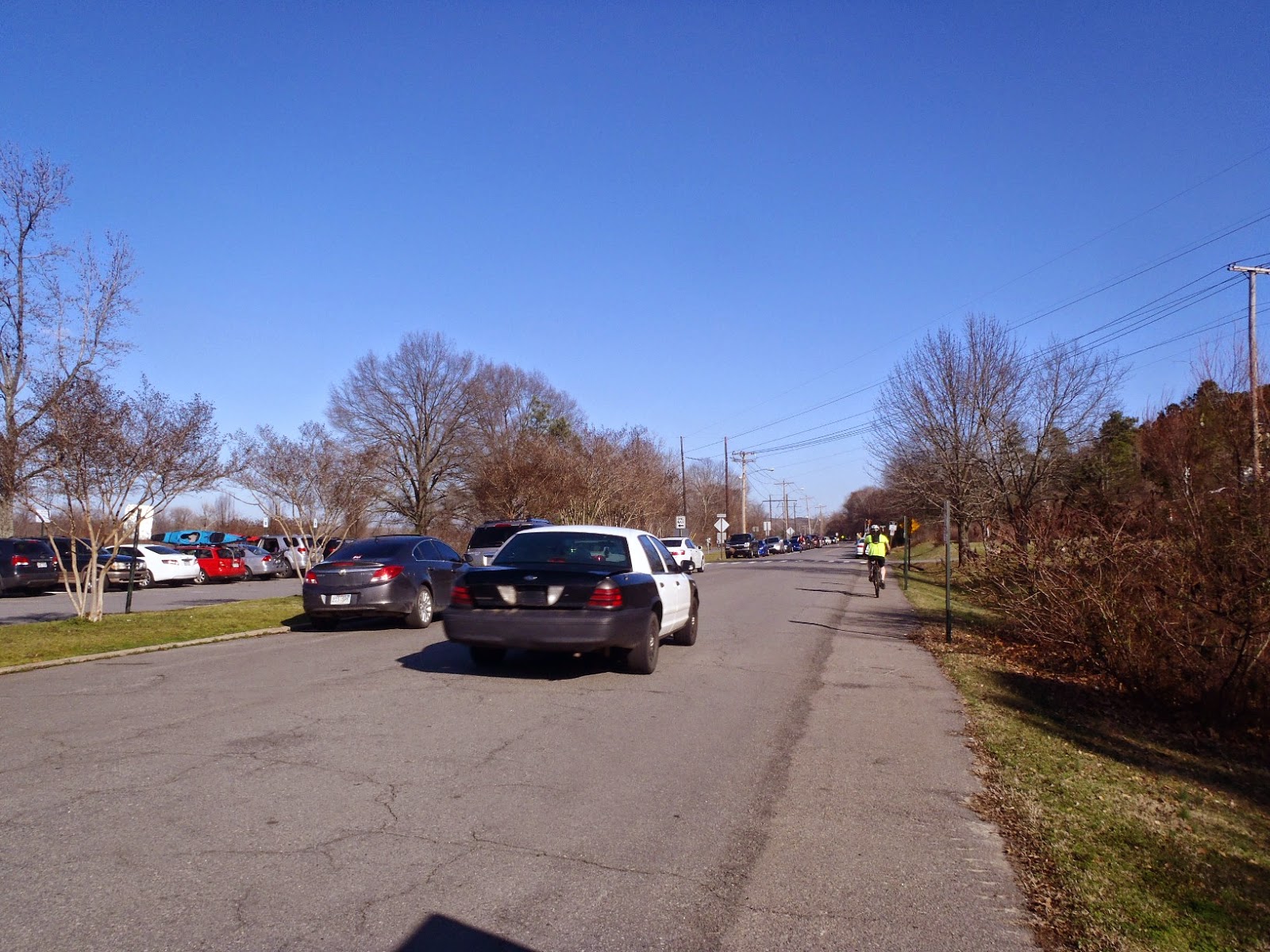 Blues Brothers? I guess you don't need a license plate for a surplus cop car; just blown out pipes and a big V-8 to roar out of a crowded park.

-Please be polite. I often hear riders, mostly newbies, barking "ON YOUR LEFT" as if it was an imperial command. That pisses some folks off. It is supposed to be an act of consideration to advise people that you are passing by. A kinder, gentler, "On your left, please.", will usually make more friends. I long ago settled into using "Passing by, please.  Thank you." That usually gets me a wave, a "thanks", and often a  smile.

- Manage groups. Group rides are fun. Group rides are empowering. Group rides create bonds and can improve your riding. Group rides can scare the hell out of people, simply due to the mass that is passing by them in close proximity. Keep this in mind. If you're a leader, slow down the pack and pass the word for the group to tighten up as you enter busy trail sections. When you get back out on the road, maintain a slower pace so that everybody catches back on. Do not punish those riders who exercise good trail manners by  forcing them to chase. 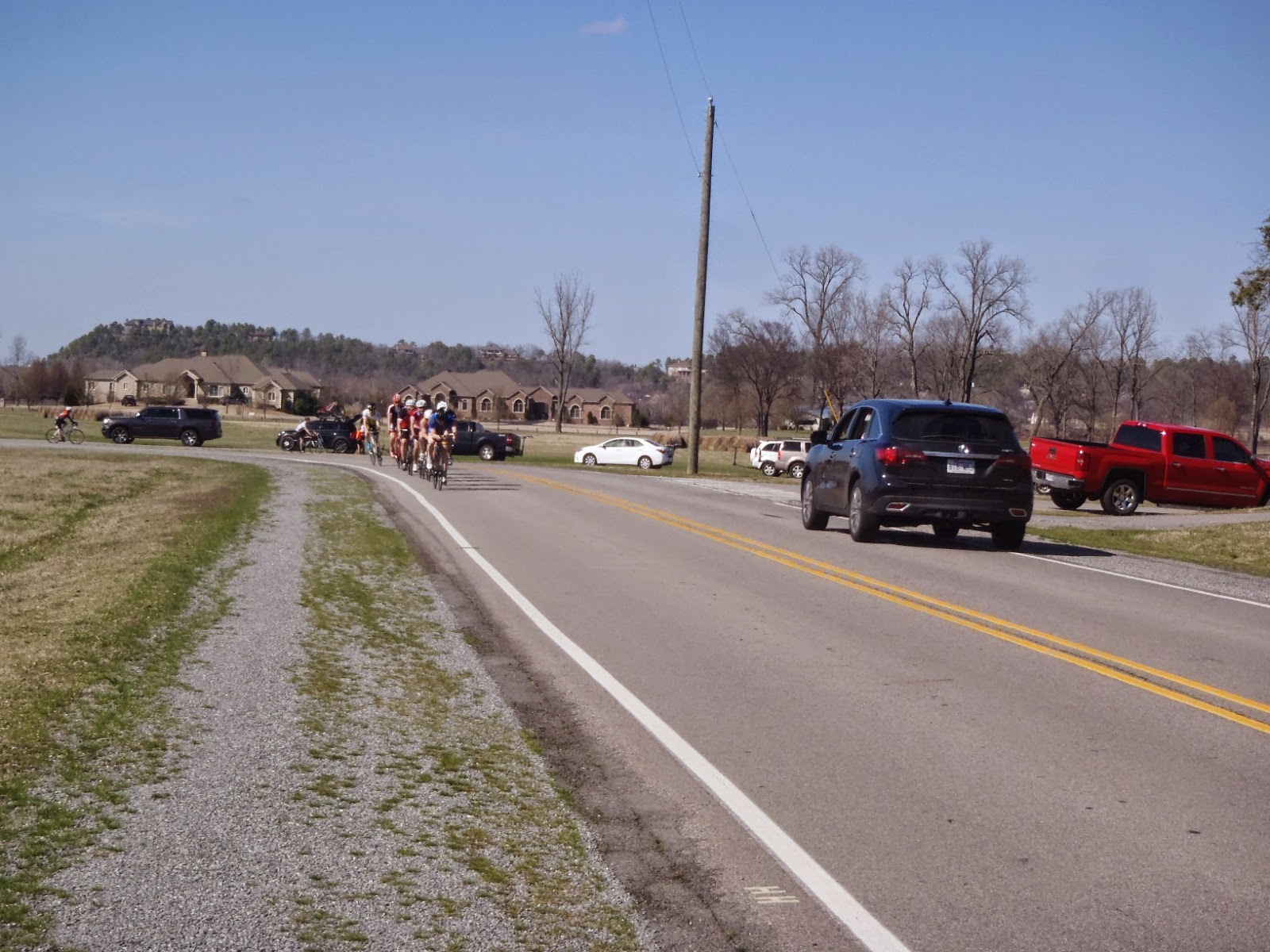 This group included several folks on aero bars. I was glad to see them sit up so they could reach their brakes as the turned on to the trail at Two Rivers Park

-Do your time trial riding on the road. Aero bars and high speed don't have a place on crowded trails. None of the walkers are going to be impressed by either your new helmet or your awesome power and most experienced riders will pick you out as a recent convert to triathlon.
Being polite and sharing the trail is only burdensome if you choose to make it so. It is simple to "Be alert. Be polite. Stay right."  It is slightly more difficult to be patient with the ranks of the clueless with whom we often. share the trail, but we can do it.

It's a new season. Be careful.
Within the last few weeks, two members of my small ride group have been hit by cars, and a third took a crash resulting in serious injury when he touched wheels with another rider. The only lesson here is that the season is young and many of us are not quite in the mid-season groove. Take it upon yourself to be extra mindful of your own safety and the safety of those around you.

A couple of notes on trail and road conditions

There is a lot of gravel on the roads of central Arkansas, usually with complementary potholes as a result of the recent snow and ice. The bike lanes along County Farm Road have been covered with gravel for the last couple of weeks, making it sketchy for cyclists and prompting many of us to choose the traffic lanes for their relative safety. 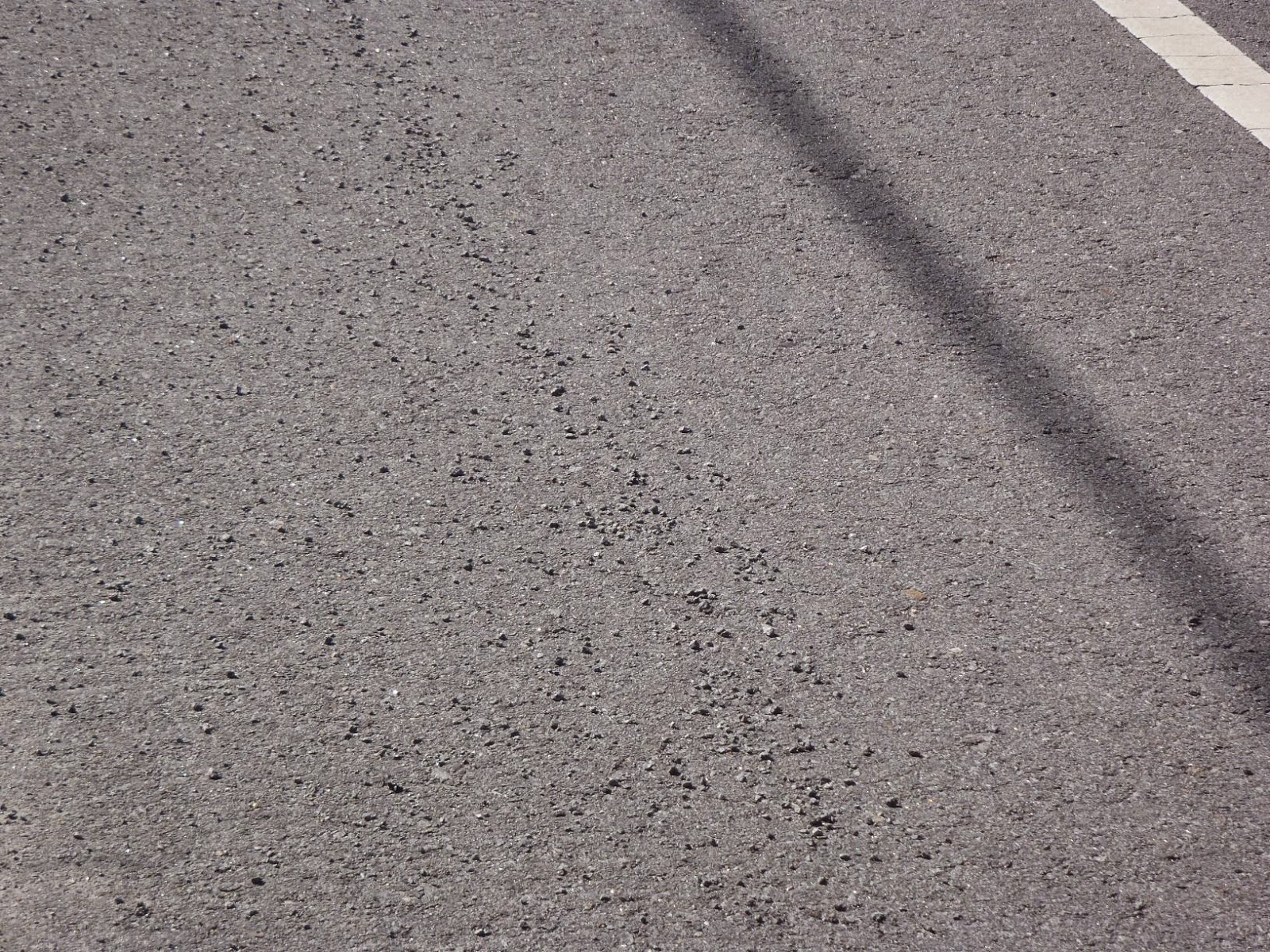 Gravel is dangerous for road riders. 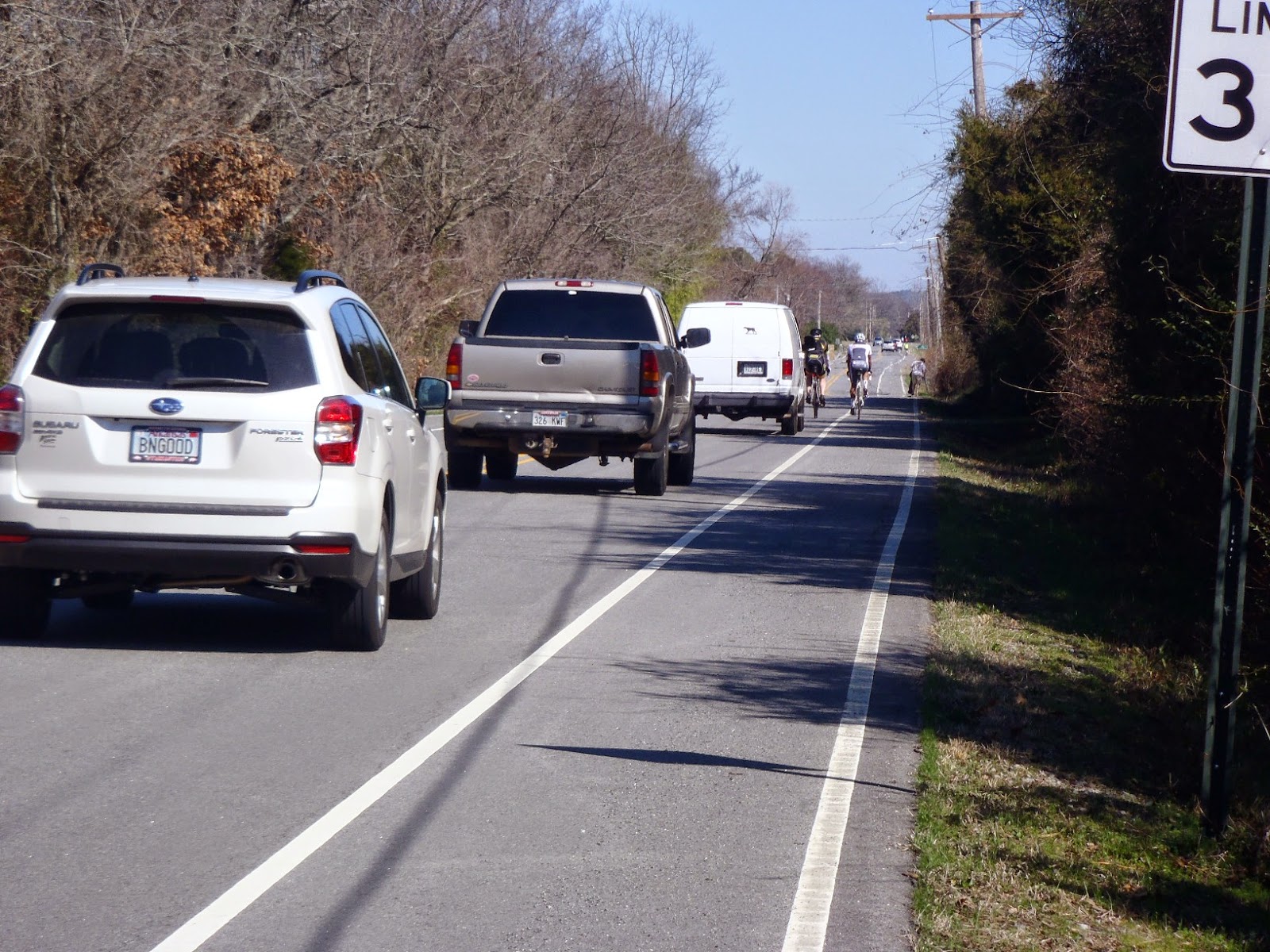 These riders are trying to stay right to allow traffic to easily pass, but gravel in the bike lane was a more immediate hazard. I'll note that these guys were not really "parade makers" holding up traffic. I spotted the line of cars approaching and waited for the shot.

Pulaski County responds!
I dropped a note on Sunday to Judge Barry Hyde's office concerning the gravel. I got a response that it had been forward to Roads and Bridge guy John Burton, and that the bike lanes would be swept today (Monday). Thank you! Pulaski County has usually been responsive to reasonable, specific requests and that kind of working government is to be appreciated.

Flooding on the North Side

High flows on the Arkansas River make for dramatic viewing at the BDB and can cause some problems along the North Little Rock River Trail. 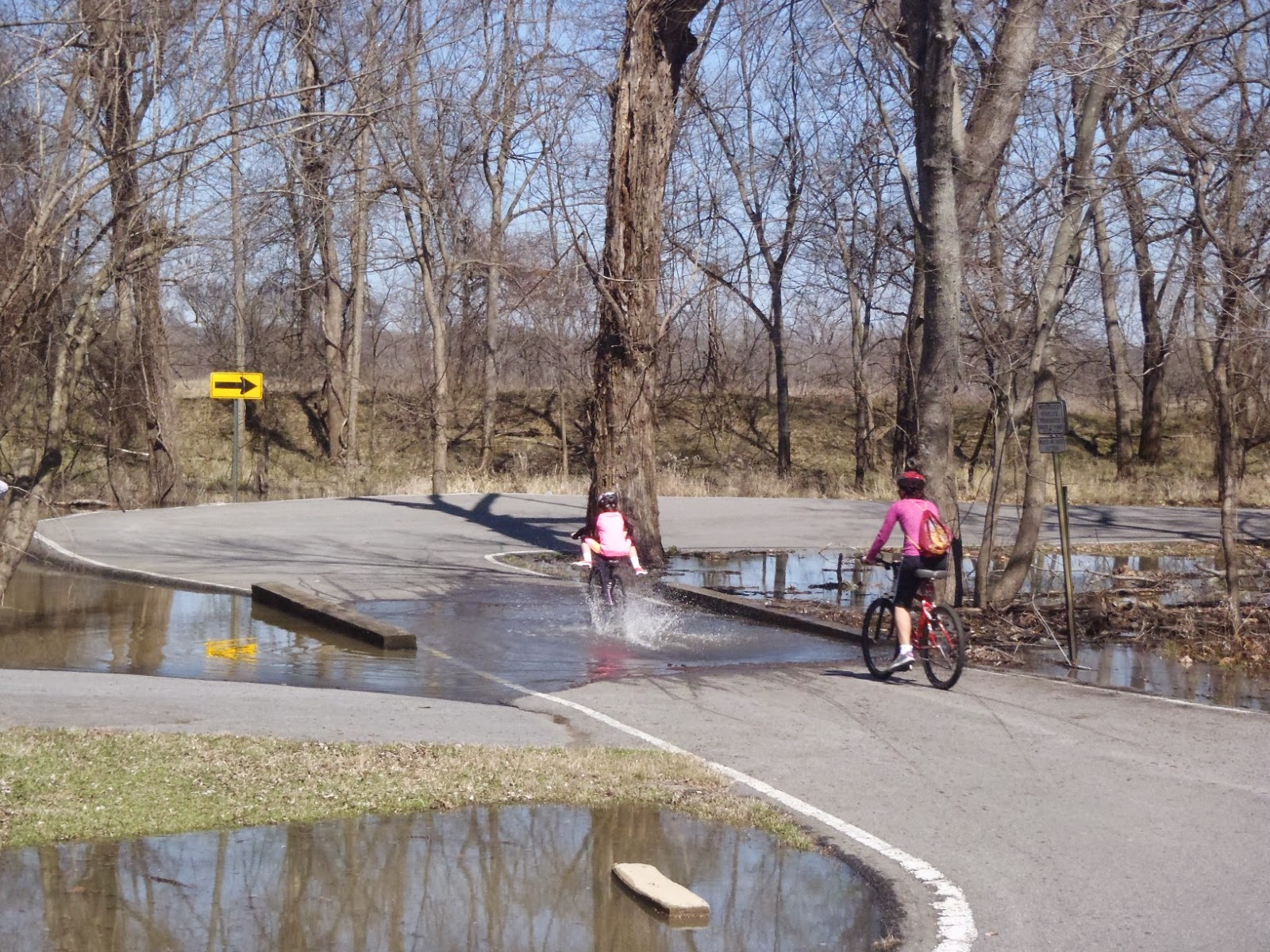 This little girl had a plan for the rising water. Feet up and flying! 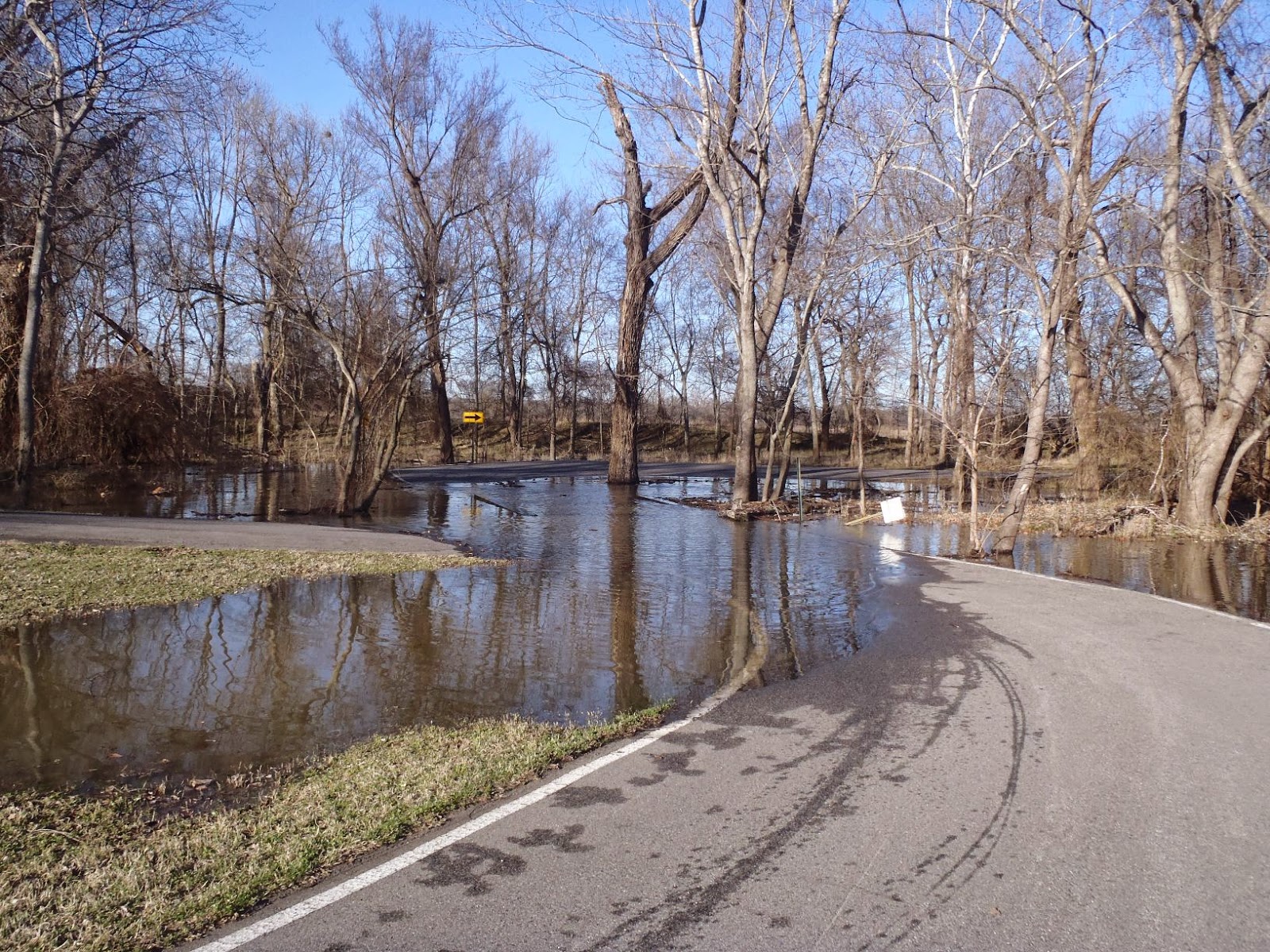 The first photo was taken at about 1:30, and this one was taken several hours later at near peak flows according to the USGS.

Be aware that the high water may change you ride plans. The USGS gauge information indicates that the river peaked Sunday afternoon, so unless we get more precipitation upstream, things should be returning to normal pretty quickly.

I'm going to give these folks another pitch. They are eager to welcome cyclists and are working to make us feel wanted. They have a nice beer selection and I'm looking forward to checking out the food. 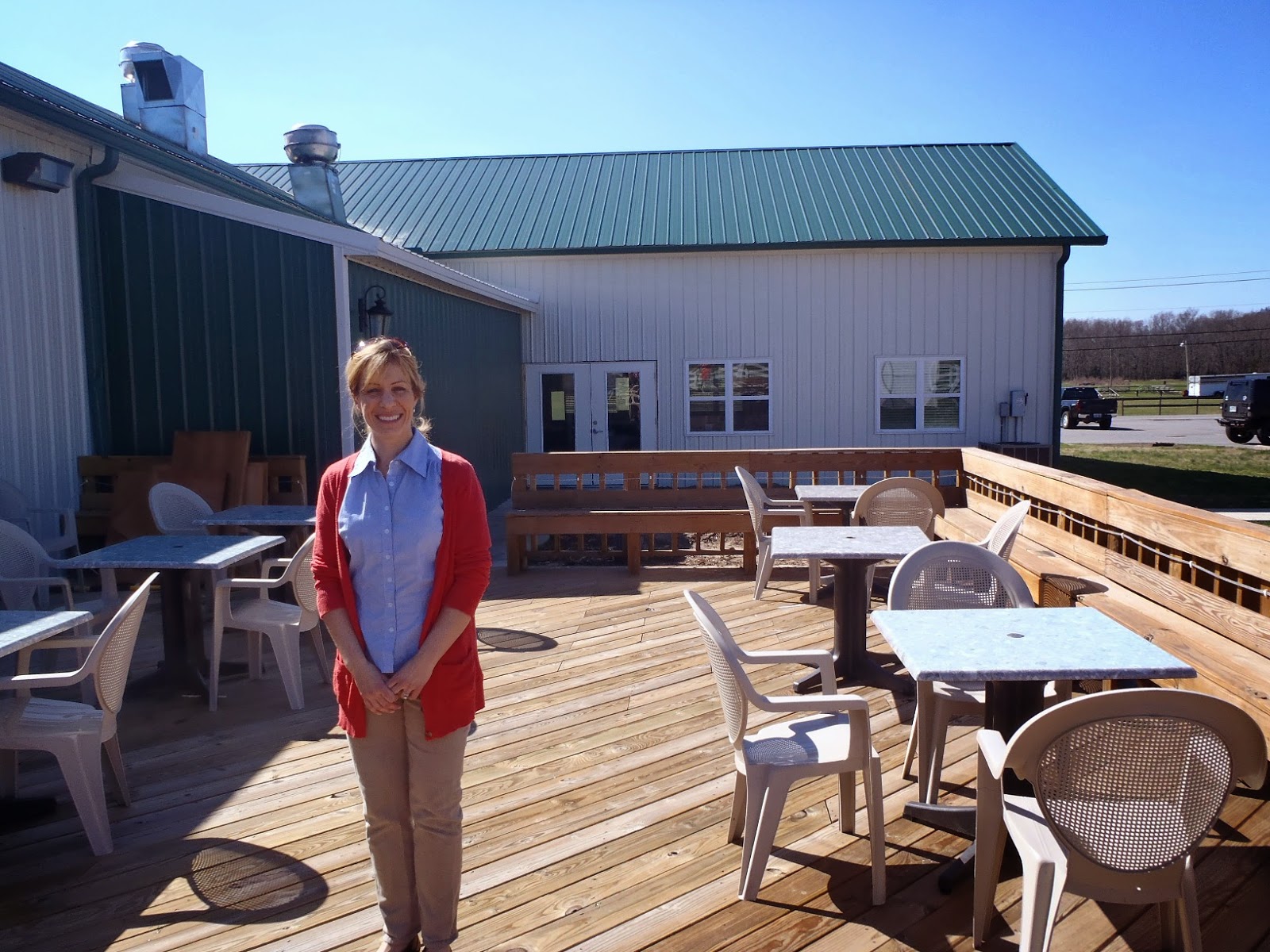 Owner Gina Fullerton showing me the deck behind the restaurant at Pinnacle valley and Beck Road. She, along with husband Mike and manager Christian, are set to welcome cyclists. They will be equipping the tables with umbrellas for shade, though the sun felt pretty good on Sunday. 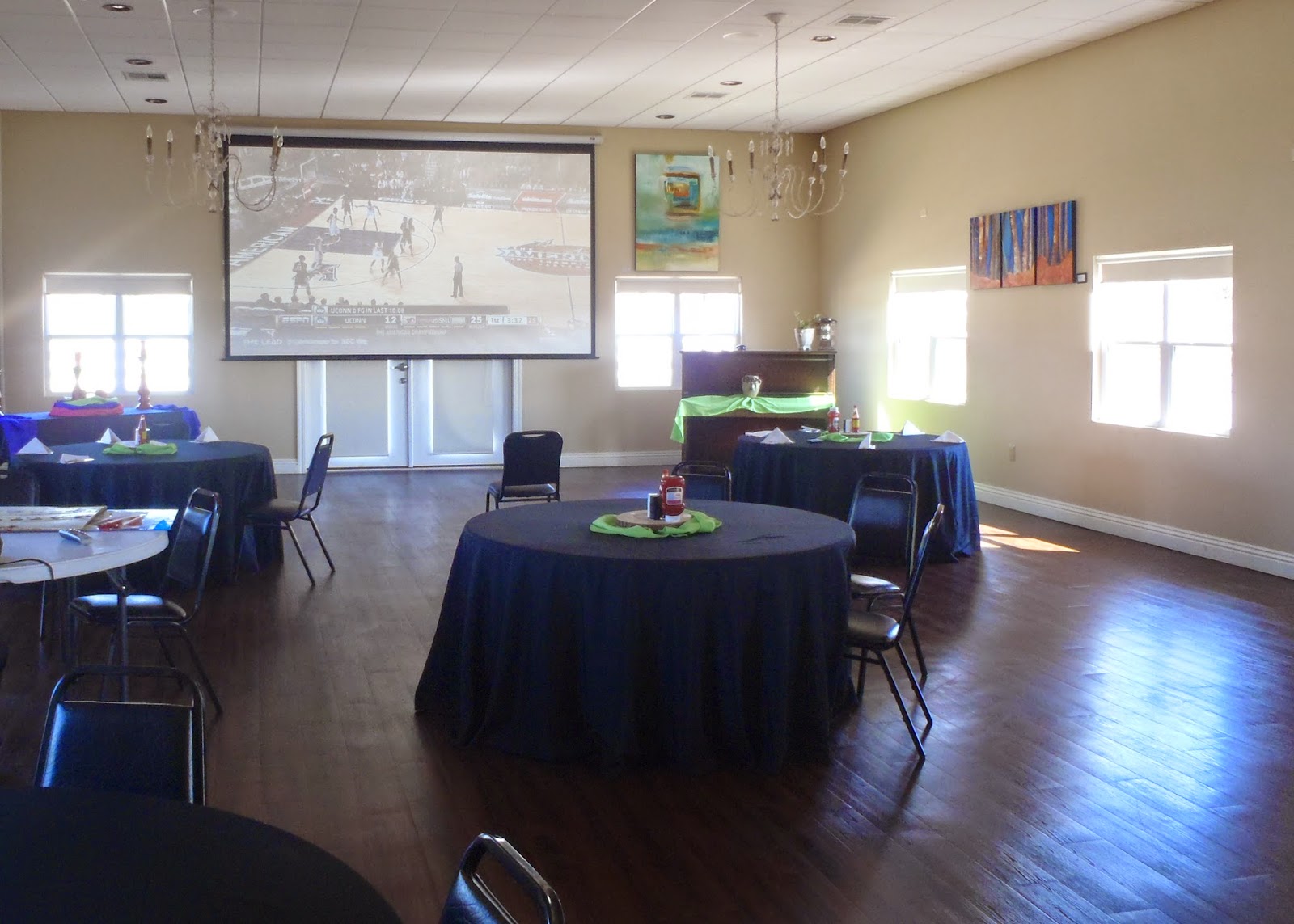 In addition to the restaurant, bar area and deck, a large meeting/party room in back boasts one of the bigger projection TV's I've seen.

I can see the Pinnacle Valley Restaurant becoming popular with riders for a post-ride brew or a late breakfast after knocking out some weekend miles. They will have their grand opening on Thursday. Drop by to say hello and check it out. They will soon open a convenience store for riders and park users, and plan to install bike racks.