In this case, "precurser" likely means the minor cursing the will be followed by months of major cursing when the Broadway Bridge is ultimately closed for demolition and construction.

The contractor for the Broadway Bridge has established a small village of construction trailers  along Riverfront Drive, and has a work barge staged at the nearby Riverfront Park. The first impact on the River Trail will take place sometime in the next couple of weeks as the trail will be closed from the Willow Street gate (Willow Street runs along the east side of Dickey-Stephens Park) to near the Union-Pacific RR bridge to the west. My understanding is that they will be removing some pedestrian stairs and other non-structural bridge components as they prepare for the bigger job at hand.
Cyclists will be re-rerouted to Riverfront Drive, while runners and walkers will use the adjacent sidewalks. 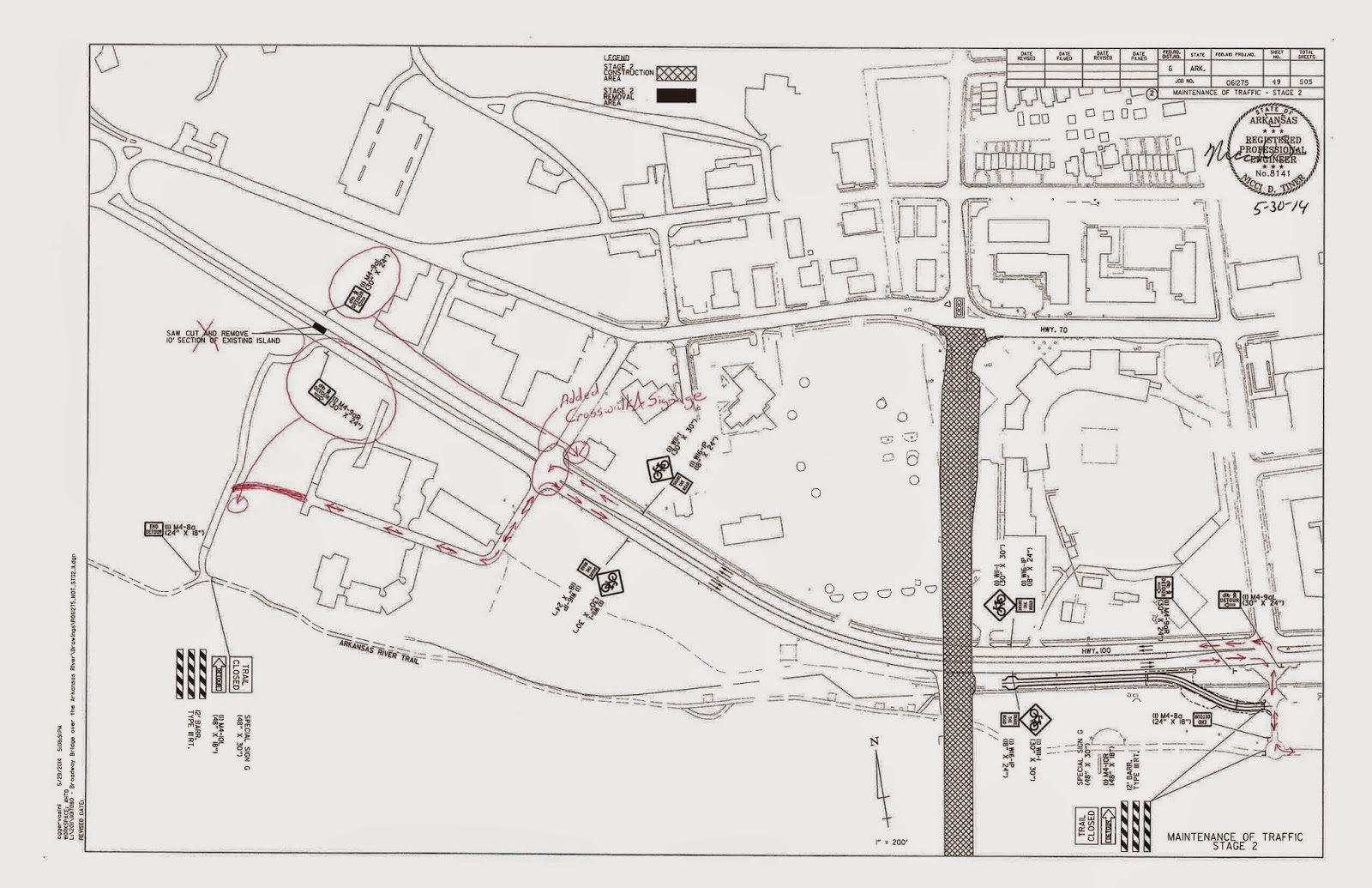 The map above shows the location of the upcoming River Trail detour. 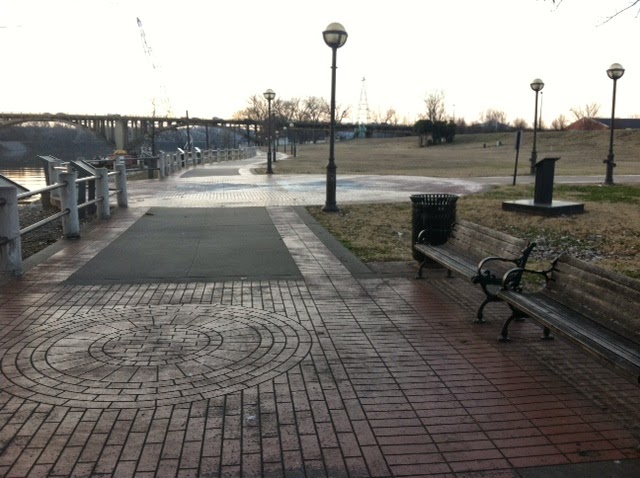 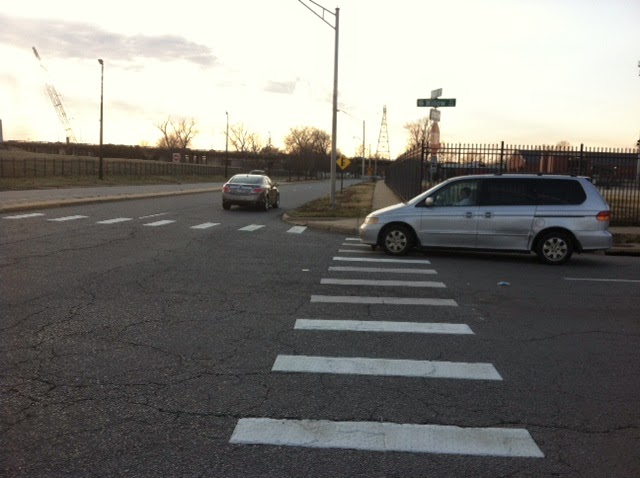 Willow Street and Riverfront Drive behind Dickey-Stephens Park. Traffic is currently not heavy, but the 4-lane divided road tends to encourage high speeds.

I have some concerns about how cyclists, runners, and other trail users will fare on Riverfront Road. Concerning striping and signage, Chris Wilbourn,  NLR Planning/Traffic Engineer (Director), shared this information in response to my inquiry:
Yes, there will be additional signage (See Attachment-map above). No lane striping at this time.  Signage for cyclists is “Share the Road”.

In addition to what is shown on the attached plan, NLR Traffic has added a temporary pedestrian crosswalk and associated signage at Karrot*, redone the pedestrian crosswalks at Willow Street and will be adding a couple of warning signs prior to the Detour on both ends.

Detour signage shown and described above is schedule to be installed this Friday; however, it may stretch to the first part of next week due to the weather. 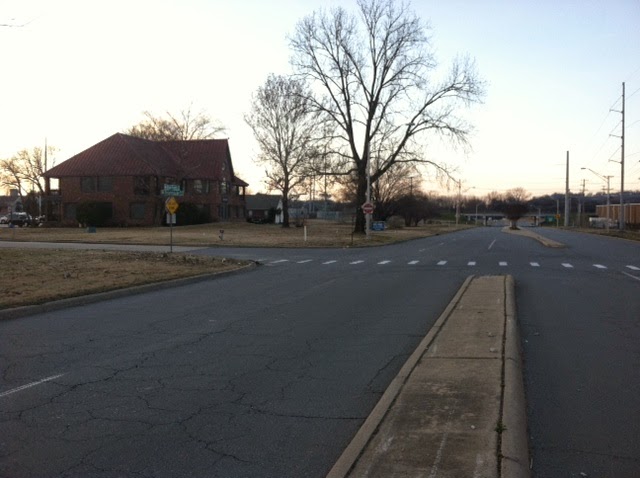 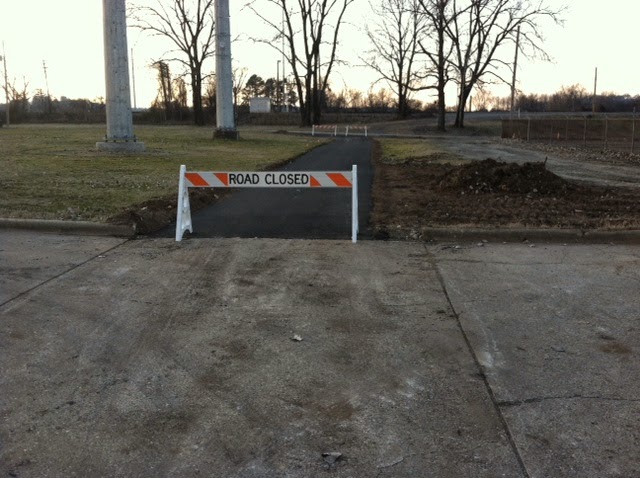 This new asphalt trail takes detoured riders back to the ART near the Union Pacific rail bridge.

It will get worse before it gets better....
This detour will be a minor inconvenience in comparison to the mayhem that will accompany the closure of the Broadway Bridge, and will provide us with an opportunity to see how having bike traffic on Riverfront will work out. The difference being that Riverfront is relatively lightly used now, but when the 20,000 cars that normally use the Broadway Bridge daily are diverted, many, if not most, will use Riverfront to access the Main Street and I-30 bridges. It appears to me that the road is wide enough to support traffic lanes and a bike lane and I hope that, if possible, re-striping the road to that end will be considered.

Impact on tourism
This particular stretch of the Arkansas River Trail serves not only local commuters and recreational riders, but it links the rest of the trail system to the Clinton Library, Clinton Park Bridge, the Junction Bridge, downtown hotels, Argenta, the River Market District, and a bike rental location . As a result, it is used by the many visitors to the area who wish to use the Arkansas River Trail. Due to the dysfunctional state of the trail on the Little Rock side along Cantrell Road, most folks  coming from Little Rock choose to cross the Clinton Park Bridge to access the River Trail. The trail is a proven attraction and I  think the local tourism economy will suffer if steps are not taken to assure that visitors can safely access it from downtown.