A couple of weeks ago, as I cleaned my bike of desiccated night crawlers that I had collected on a wet morning ride, I wondered to myself, "What could be more disgusting than scraping worms off of my fork, frame, and brakes?"
"Goose poop" came immediately to mind, though I decided that it was a toss-up on the slime scale.
What also came to mind was the fact that North Little Rock's riverside trails, fields, and roads have become blessedly almost goose free in recent months. While geese are by nature migratory, they are also lazily efficient and adaptable. When they find an environment that offers easy food sources, safety from predators, and a convenient place to poop, they tend to settle in to a routine of eating, pooping, and reproducing. A couple of years ago, the NLR City Counsel caught hell over a proposed urban hunt to thin out a huge and growing population of resident Canada geese in the parks along the Arkansas River. It had become difficult to ride the River Trail without encountering flocks of surly geese and it was a test of skill to ride through many stretches without pasting the bike with some of the thousands of nasty green poodle-turd-sized droppings that littered the trail. The geese had easy living on the golf course, soccer complex, and in the grassy fields along the river. Though trail users and golfers had complained, things came to a head when soccer games began to be cancelled or moved as fields became too littered with feces to allow for play.
After an outcry over the proposed thinning of the flock by way of a hunt, NLR decided to hire a firm to use dogs to chase the big birds out of their comfort zones. It worked. The geese are adaptable and quickly figured out that it was not worth loitering in areas where they would be chased regularly by an eager canine. Unfortunately, as soon as the dog contract expired, the geese started returning to the area in large numbers and were soon back to their lowdown ways.
Park officials had looked into specially trained goose dogs, which were very expensive, but eventually were offered a bit of a bargain in the form of Shep, a local rescue dog with the instincts and a good start on the training needed to do the job. 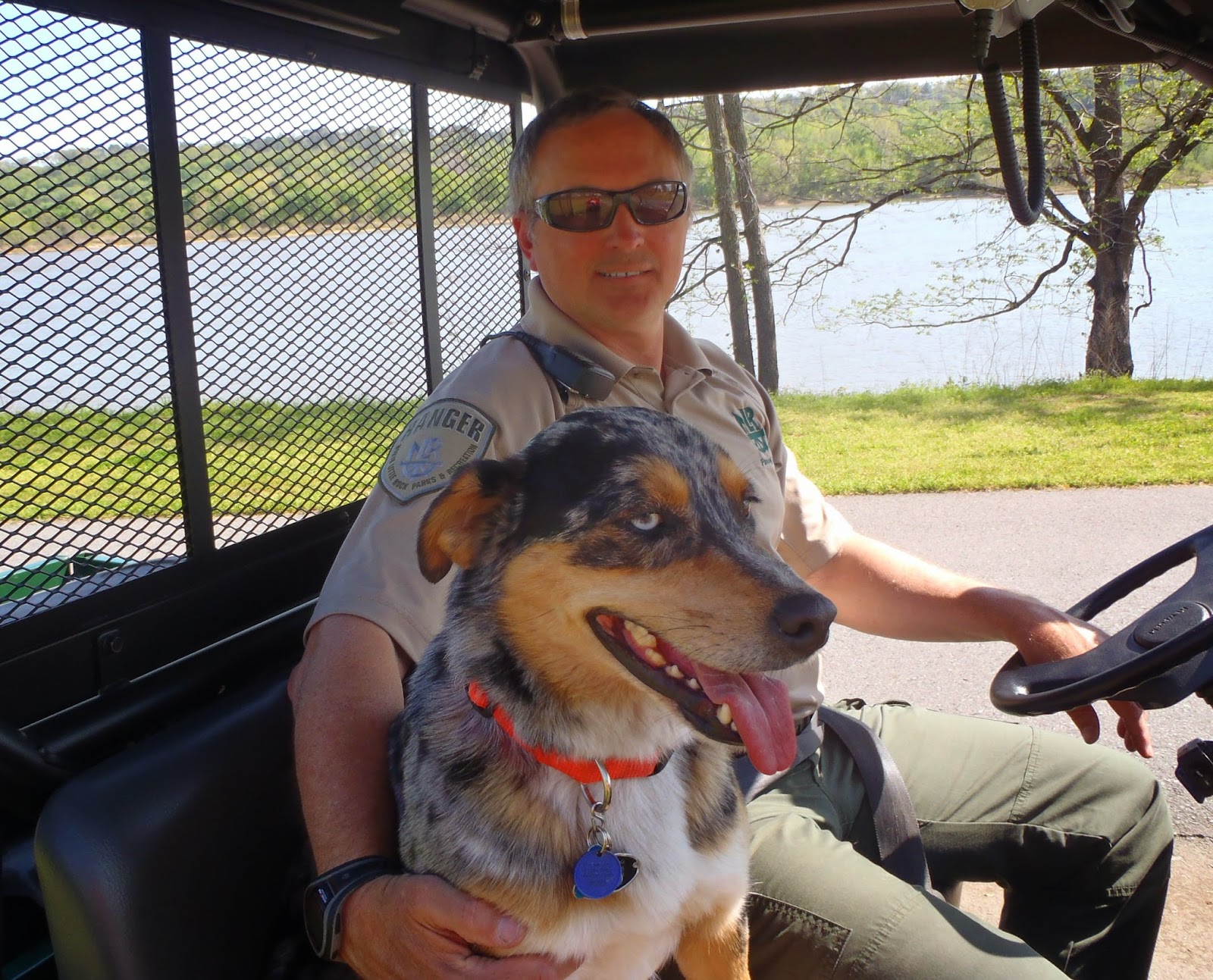 NLR park ranger Ian Hope and Shep on patrol along the river. Geese have become scarce, but Shep is constantly vigilant.
I will have to admit that I was predisposed to like Shep. He is my kind of dog and he would fit perfectly into our little pack of rescued mutts. He's a catahoula mix weighing in at 40 pounds, with a merle coat and "off" eyes, one blue and one brown. I had sought out an exclusive interview a couple of months ago when he first arrived, but Mayor Joe Smith had other ideas and Shep was introduced to the mainstream media at a press event. That's just as well, as my recent encounter with the team of Ian and Shep gave me a chance to scratch his ears and get acquainted one-on-one. He was very approachable and friendly when I rode up and, like many working breed mixes, Shep seems eager to please, laid back when not engaged in his job, but ready to launch like a missile when duty calls.  Good boy!
Ranger Hope did let slip the fact that Shep is still a work in progress. He does his duty with geese, but he has a bit of a squirrel problem. Our dog Willie loses all sense of propriety when he sees a squirrel, so I understand Shep's response to squirrel sightings. Ian feels it is bad form for Shep to be chasing squirrels in the park, so they are working on it. In the meantime, my advice to squirrels is to stay in the trees where they belong, at least according to Shep and Willie. 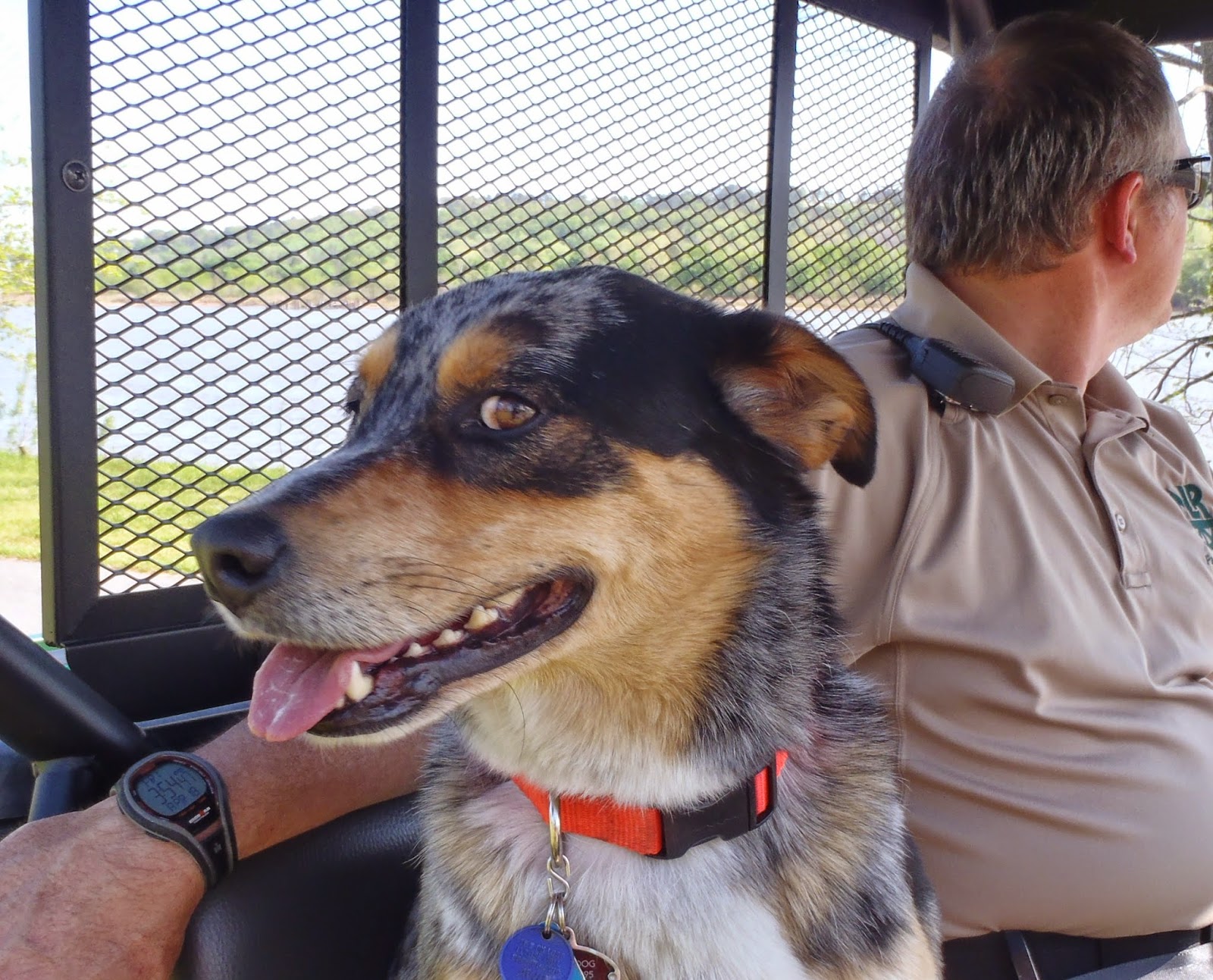 "Squirrel problem? Who? Me? I don't have a squirrel problem."
Shep was a little coy when the subject of his issues with squirrels came up.
Shep and Ian make a comfortable team and they are doing great work in helping to keep our riverside parks clean and hospitable. For goose lovers, there are still enough of the birds around to be enjoyed, but the large intrusive gangs are regularly encouraged to move along. ﻿
Posted by JBar at 2:58 PM

Two trips through Burns Park in recent Sunday outings revealed not a single Canada Goose sighting. On the first trip about a month ago Judy & I along with our rescue pooch Banjo entered the park off I-40, past the animal shelter, across the golf course, along the road past the dog park down to the new fishing pier, parked there and walked about a half-mile West along the River Trail and then back to the car. Not a single goose spotted. A motorcycle cruise along much of the same route this past Sunday had the same results. Shep & Ian have done a tremendouse job, but I'm wondering what it looks like on the other side of the river in the Capitol City, Riverdale, Rebsamen Park, Murray Park, etc. Maybe next weekend to check that area out!