If you read cycling publications, you've read about Gran Fondo events. Known as randonnée cyclosportive by the French, the Italian Gran Fondo has caught on here in the English-speaking U.S. as the popular term for mass start, long distance rides.
I first started noticing gran fondos a few years ago when riders like Levi Leipheimer put together rides that drew thousands of cyclists to ride with some pros and enjoy a unique experience that was not really a race but that featured amenities above those of a typical charity or event ride.
Gran Fondos have since sprung up all over the country and the world. While some appear to simply be a re-labeling of a "Tour de Somewhere", most feature unique and challenging terrain along with better-than-average food and swag.
Such will be the case with the Arvest Bank Little Rock Gran Fondo. 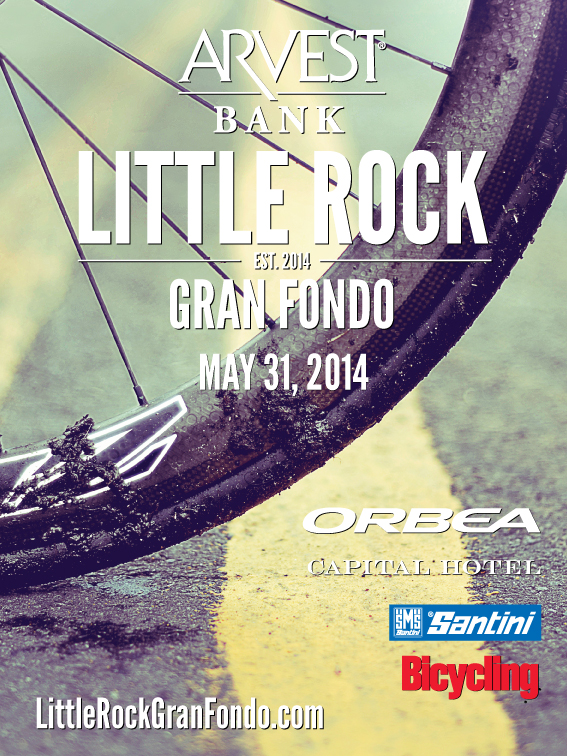 Get on board. There is only one "first" Little Rock Gran Fondo! The ride will be limited to 250 riders.

I had the opportunity earlier this week to sit down with Michael Chaffin of the Capital Hotel and Jason Warren of Arvest Bank. Appropriately, we met at the Spokes Coffee Bar at Orbea, USA, at 119 Main Street in downtown Little Rock, a venue that features a view of the nearby Capital Hotel.
Chaffin and Orbea's Tony Karklins started developing the idea of the ride some time back, and their goal was to create what might be called a premium experience in comparison to other local event rides. An analogy that occurred to me was a comparison of a night at a Holiday Inn versus a night at The Capital Hotel. 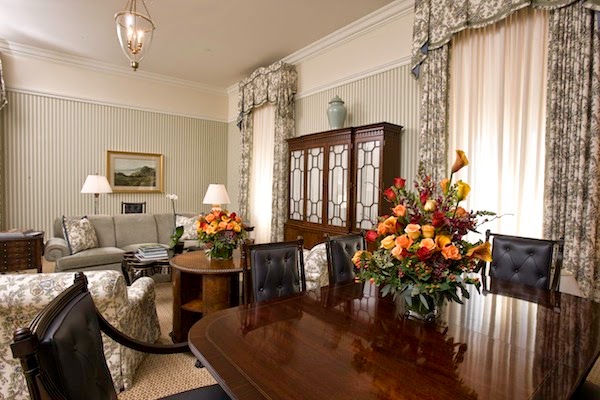 This is NOT a Holiday Inn.
Both places provide a clean bed, good service, and a restaurant, but from that point on, the experiences are very different. One is adequate while the other is excellent.

About The Ride
The ride will be around 70 miles and, from what I can tell, will be mostly flat. It will include some unpaved road, but nothing that calls for anything but your road bike. Chip timing is included, so you can throw down if a good official finishing time is what you're riding for, but.....I have been advised that riders will not want to pass up the 2 rest stops. I don't know what will be served, but I think your choices will extend beyond Powerade, bananas and boxed cookies. From the website:

"Taking some pages out of the Capital Hotel’s book, you won’t find service like ours on any other ride...from start to finish...and at every stopping point in between. Who says you can’t take Concierge service on the road."

At The Finish
The start and finish will be at or near 2nd and Main. After crossing the line, riders can hand off their bikes at the secure bike storage at 117 Main (next door to Orbea) and head on over to the Arvest Finishers' Lounge for refreshments.

The Food
If you've ever ridden in Europe or heard stories from those who have (I've just heard the stories..damnit!), a prevailing theme is that of good food and drink. That is not lost on the organizers of the Gran Fondo. Michael said he thought that it would be cool if he could get a couple of Little Rock's top chefs to come out and share their talents at the post-ride street party. He came up with a list that included Matt Bell of South on Main, Tomas Bohm of The Pantry, Arturo Solis of the Capital Hotel, Travis McConnell of Butcher &  Public, and Donnie Ferneau. He extended the invitation and was hopeful that one or two of the five would accept. Well, a grand slam results in four runs and I guess that Chaffin hit one better when all five accepted.
The result will be "Pop On Main", consisting of five pop-up restaurants, each serving the unique creations of the individual chefs. I expect delicious fare including a lot of locally grown ingredients.
Tickets for the Pop On Main will be available for non-riders, so your entire clan can enjoy the event.

The Swag
I've got no idea what will be in the riders' swag bags, but was assured that it will be much better than the typical drug company ball point pens and note pads, coupons, and unusually flavored gels.
Custom jerseys by Santini will be available for purchase.

I asked Jason Warren, who happens to be one of my regular ride partners, what made the event attractive to Arvest Bank. Both Jason and Jim Cargile, President and Sales Manager, are avid cyclists it has not escaped their attention that many of their customers can be seen out on the road or the trail on bikes. As part of Arvest's core values of community service, the bank often sponsored golf tournaments and similar events as a means of engaging the local community. Those events are traditional in the banking business, but they felt that sponsorship of the Little Rock Gran Fondo would help in further building the growing image of central Arkansas offering many quality-of-life amenities, but that the sponsorship would directly touch many of their existing and prospective customers. After, banks are in the business of money and the cycling demographic is an attractive one.

All of the sponsor/partners represent premium brands and Chaffin emphasized that all of the partners are adding their input to the event.


The registration fee for the Arvest Bank Gran Fondo is $125.00 unless you jumped in early, but the reality is that premium quality comes at a price, and this may prove to be a bargain.

Note: As I wrote this article, I called Jason Warren to confirm some information. I
found him in Austin, where he and Michael Chaffin were going to check out the Texas Gran Fondo for ideas.  In the background, I could hear Michael saying, .."and we're going to be better than Texas."

Will any Arkansas wines be included among the local products served? This would be a great opportunity for promoting them.

I wouldn't have much of an issue with the $125 if this was a fundraiser like Levi's which goes towards:
"Your fundraising dollars literally keep places like the Forget Me Not Farm, a working farm for at-risk children and abandoned animals, open and functioning now that public funding has gone dry.
You invested in the development of high school mountain biking, putting kids on bikes with the same enthusiasm normally reserved for ball-and-stick sports.
These dollars bridged the gap for slashed federal funding in Sonoma County’s far-flung rural schools, bringing high-speed internet and tablets into the classroom.
You purchased a wildland fire truck for fire departments in those same rural, forested areas constantly under threat from forest fires.
The City of Santa Rosa is building its first public pump track ever, with GranFondo dollars.
Access for bikes on local California State Parks’ land was preserved because of money you raised with the GranFondo.
You patched countless rim-swallowing potholes on cycling destination roads throughout Sonoma County.
There’s a bright light being shone on pediatric cancer research, holistic cancer treatment, and cancer patient support through a variety of organizations thanks to your work."
http://www.levisgranfondo.com/

But paying $125 to ride my bike and some food and beer...which I would imagine the cost of which should be goobled up by the promoters as a promotional tax write off....well I don't mean to offend anyone, but I just can't justify it. I'm curious to see if this takes off or if the $125 squashes it. Hopefully it's a big success, but if it isn't the pricepoint might need some reconsidering.