The MS150 is the well-recognized name for events across this great land of ours. You can Google "MS150" and find rides in virtually any state. I was preparing to whine slightly about the fact that the local version of the ride was actually 158 miles and that organizers seem to keep tacking on a few bonus miles until it was brought to my attention that the event had been rebranded "Bike MS". I guess that means that they can just have their way with us on miles, which is probably OK. Besides, I looked at the website for the hugely popular MS150 Austin and found that it is 180 miles! Either the miles are bigger in Texas or they add a 100-mile Saturday to an 80-mile Sunday and get 150, perhaps as a result of the flawed text books they seem to favor down there. The Rock'n'Hot Ride to Hot Springs and back last weekend was blessed with great weather, skies breaking clear and blue with a cool north wind after overnight storms and a week of sweltering weather, and the atmosphere was laid back, as usual. I didn't get the final count, but there were 140-150 riders at the start of the 2-day event- a mass start, but not massive, making it comfortable for just about anyone. 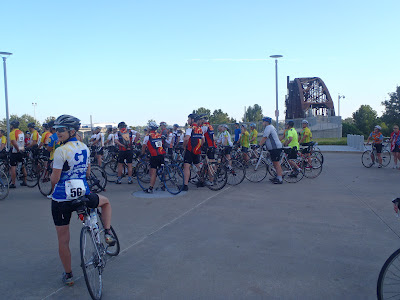 Diane was "representin' " in this start-area photo. Diane and I rode for Team Garver, along with Mark Wyatt, Sarah Miller, and team captain David Gambill.
The bunch immediately crossed the Clinton Park Bridge, which allowed a little time for legs to warm up before hitting the open trail. In the case of the little pack of friends that I was riding with, we got an early break as one of our group flatted before getting across the bridge. He did not improve his standing when he declared that he'd noticed the tire was low but had "aired it up in the parking lot". In an effort to protect my friend and prevent him from gaining a reputation for mechanical ineptitude, I will refer to him by the pseudonym of "Mr. Jones".  After a quick tire change for Mr. Jones, we set off in pursuit of the 136 riders who had passed us. As we slowly gained ground, passing first groups of moderately fit riders on town bikes, then working our way on up through the food chain of faster riders. We caught Diane's group and passed them as they casually chatted on their approach to the BDB. I think their conversation and giggling somehow related to a group of guys that they had passed frantically changing a tire a the foot of the Clinton Park Bridge. 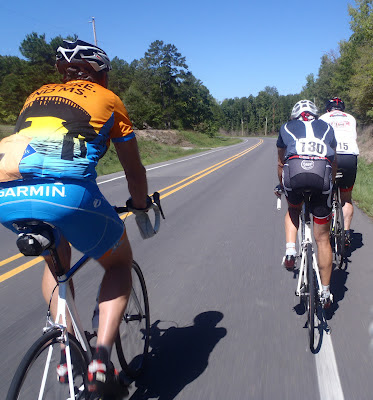 ﻿
Ride mates Sam, Tom, and Dumas on the open road.

The route was a good one, taking a familiar route west through Two Rivers Park and out Barrett & Garrison Roads to Ferndale. After going out Kanis Rd. to Paron, things get a little fuzzy. Except for a short stretch of Hwy. 5, I had no idea where we were. 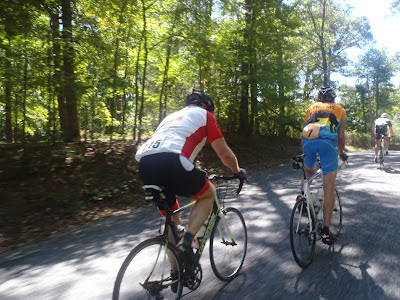 The roads were lightly traveled and rural, with plenty of narrow, unstriped chip-and-seal, but it was very pleasant  There were no major climbs, nor was it flat, with rolling hill followed by rolling hill for mile after mile. 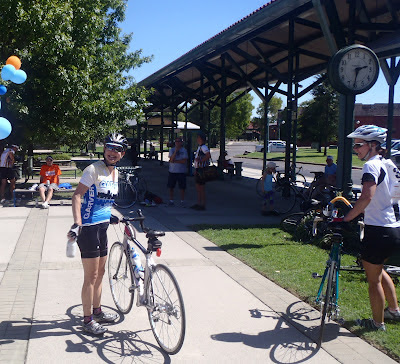 Diane and her new friend Joan were all smiles when they arrived at the Hot Springs Transportation Depot, having their ride and stops at every support station. The time I spent awaiting their arrival was well-spent with a massage and a couple of Diamond Bear Pale Ales.
At the Arkansas MS Rides, Ricky "Cigar Man" Skaggs is very popular, as he brings boxes of good cigars and the Diamond Bear. My relationship with cigars is a bit like that of the 10,000 Harley-Davidsons that were in Hot Springs for a rally. I like them just fine until they fire a bunch of them up.
. 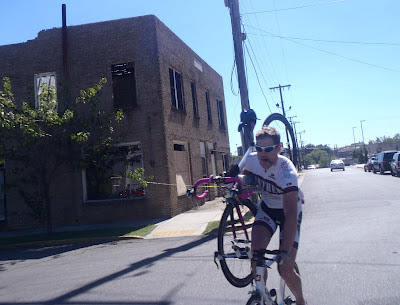 Little Rock rider Kris French transporting a friend's bike to the hotel after a visit to the cigar man. 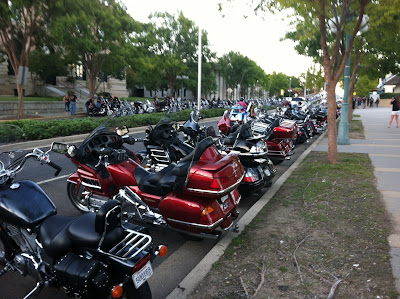 We were not the only bikers in Hot Springs. This was the parking scene all over downtown, and a few thousand constantly cruising Harleys made for a really noisy environment. Nothing against the bikers, but many MS riders complained about a lack of sleep. 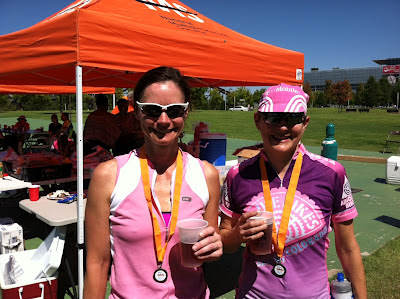 Joan and Diane complementing their finisher's medals with a pale ale. It's a nice color match of awards for a job well done.
The ride to Hot Springs was great but it will likely move back to Petit Jean, as the motorcycle rally is an annual event that coincides with the MS dates. The MS150 rides from Mather Lodge at Petit Jean State Park have been among my favorites over the years, and the lodge has been recently renovated.  Put the MS ride on your radar for this time next year. It is a great cause, a rewarding ride, and very good way to put some miles on your legs before the BDB100.
Posted by JBar at 8:28 PM

Thanks for letting me tag along with you guys that weekend. I had a great time and look forward to doing it again next year.