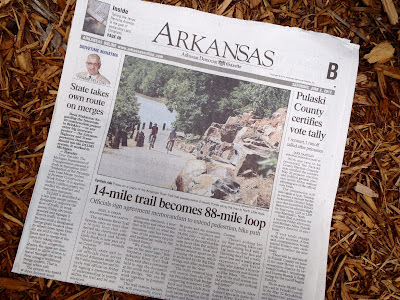 An 88-Mile River Trail System will create both transportation and recreational opportunities for Central Arkansas residents and visitors.

On Friday, June 1, city, county, state and federal agency representatives joined in signing a Memorandum of Understanding creating the Arkansas River Trail System, an 88-mile route consisting of a combination of existing multi-use trail systems and designated routes on public roads and highways. Approximately 75% of the now-designated trail system is on public roadways. I was delighted to see that the Arkansas Highway and Transportation Department was among the signatories, as it gives me hope that non-motorized transportation might indeed be somewhere on the fringes of the AHTD's radar. I was also somewhat disappointed that Governor Mike Beebe was not present, as his leadership could certainly add impetus to efforts to elevate the State of Arkansas from our recent last-place showing in the League of American Bicyclist's state-by state ranking. 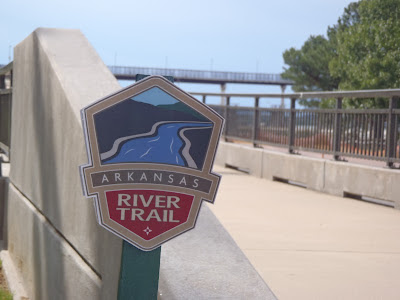 The MOU is largely the result of  efforts by the Arkansas River Trail Task Force to provide a more uniform system of signage, policies and construction standards, such as adding bike-friendly shoulders to road construction, to help guide the growth of cycling and pedestrian infrastructure throughout Central Arkansas. Hopefully, this effort will continue to ultimately have statewide reach. The agreement is not a plan to build more miles of multi-use trails such as the existing Arkansas River Trail,  but instead takes the important step of putting designated bike routes on public roads while creating a template for further expansion. While cyclists already have the right to share the roads and highways of Arkansas, any experienced road rider will tell you that our presence is not accepted by much of the motoring public.That is unlikely to change anytime soon, but changing public perception is somewhat like answering the question, "How do you eat an elephant?" The answer is, of course, "One bite at a time."

Not all cyclists embrace the concept of a "trail system", but the recent ranking of Arkansas as 50th among states in "Bicycle Friendliness" indicates that we have a long way to go and that virtually any step is one in the right direction. While we would all would love to see more urban bike lanes, bike boxes, and traffic calming measures on busy urban thoroughfares, let's be realistic and pick our battles wisely. By nature, I'm a "fix it now" kind of guy, but I'm learning that the wheels of government and public policy turn slowly and that those things will come with time as our bike culture evolves and grows in acceptance.

Will any of this alter the LR negotiation with Stephens/Collegiate School interests? In other words, help the folks who vote to close the loop?

75% of the now-designated trail system is on public roadways. That's awesome! Although like everyone else I'm pissed off the original Rivertrail is only half finished...the Half Ass portion resding in Mayor Mark Stodola's Little Rock.

Frankly, I was surprised to read that he addressed that oozing sore at the signing ceremony with another half-hearted commitment.