Yes, Sam Ledbetter with his Road Hogs team, under the direction of Lester Moran, ran away with the JBarCycling Minileague honors by amassing an impressive 7210 points. That also put the Road Hogs at 163rd out of 42,166 contestants worldwide. That's in the top .4%. 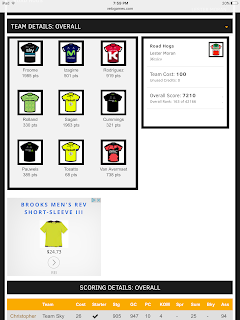 Our podium was rounded out by Alez' BB#1 with 6395 points, closely followed Moffeed's Derpola with 6369.
Moffeed, aka Drew Moffitt, rose from the ashes of last year's Tour in which he bounced around DFL for quite some time. 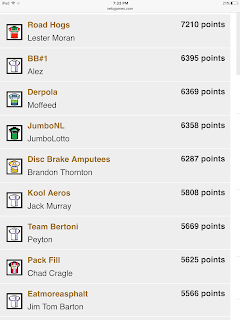 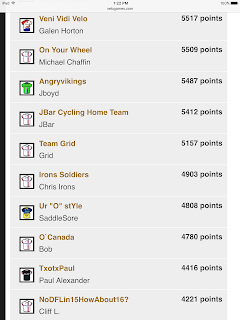 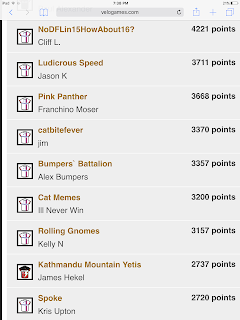 On the whole, our league made a very respectable showing. Perhaps next year, I'll have more time and energy to devote to begging for prizes and promoting the league.

Thanks to everyone who played. I have been approached by quite a few folks who just missed the cut-off for team registration but who, nonetheless, asked me to keep up the league.
So....be watching for news of the Vuelta.

Oh, yeah, the OTHER winner....
Congratulations to Chris Froome on his third TdF win. There were even a couple of stages where he demonstrated some excited and determined racing, though the last week of the GC race was boringly predictable. Nobody could attack Sky, and the few weak efforts often resulted in the attacker losing time as Sky caught and passed them with their relentless team strength.

Treks Himalaya is indoor outdoor trekking and tours operative company takes you that further way to guarantee you has a memorable trip that you have been dream of your choice. We have your choose of Trekking in Nepal for 3 days or 30 or more days it depending of your timetable. We continually our respect to your Nepal Trekking. Whether you are looking for a quiet gateway, a memorable outing with a family or an exciting nature. We offer you with the best progressive information and itinerary leading focused and modified as per your requirements of Trek in Nepal. We are attempt to encourage to Hiking in Nepal exterior motivated to safe and matured tradition as well as conserve the ambiance for generation. We are specialize in organize Nepal travel activities excursion such as:- Trekking, Helicopter Tour, Peak Climbing, Mountain Flight, Honeymoon Tour, Sightseeing, Rafting, Jungle Safari, Pilgrim’s Tour, Hotel Reservation, Air Ticket, Tibet and Bhutan Tour many more. Typical trekking and hiking as unique combination of natural glory, spectacular trekking trips to hard climbing and trekking most rewarding cultural beautification array to walking, trekking width height of country.
Annapurna Panorama Trekking , Annapurna Panorama Trek , Annapurna Base Camp Trek , Annapurna Base Camp Trekking , Annapurna Sanctuary Trek , Ghorepani Trekking , Helicopter Tour in Nepal , Nepal Helicopter Tour , Manaslu Trekking , Mardi Himal Trekking , Annapurna Trekking , Everest Trekking , Langtang Trekking , Trekking in Nepal , Nepal Trekking , Trek in Nepal , Hiking in Nepal , Nepal Tour , Nepal Travel , Nepal Holiday , Tour in Nepal , Travel in Nepal , Adventure Trekking in Nepal , Adventure Trekking , Nepal travel information , Nepal tour information