Along The Trail-Driving, Parking, and Bike Demo


Driving and parking
Considering the number trail users and the diversity of their purposes, there is very little real conflict along the Arkansas River Trail.  Most of the conflict that does occur is more likely the result of  inattention than of any sort of malice ( see: The Blissfully Oblivious) . People largely learn and observe  the written and unwritten "rules of the road". As a result, riders, runners, walkers, skaters, and even extendo-leash dog walkers, get along just fine. I am aware of a couple of recent conflicts that involved people driving and/ or parking on the trail, and I was a party to one of them.
From conflict to conversation
I was riding near the fishing pier at Burns Park when I noticed that a young man had pulled his pickup down the trail and parked near the pier. I mentioned to him that his actions were illegal and that I was likely to notify authorities. Admittedly, I was in a foul mood, and my tone was likely less than convivial. He responded by suggesting that I do something anatomically impossible and made mention of my mother. I responded with an appropriate rebuke, and was only a little surprised when he jumped in his truck and met me a little further up the trail. I will note that he took the road rather than continuing down the trail. He was a self-describe law-abiding citizen and a nice guy. I explained that driving and parking on the trail was a hot button issue for me, and he explained that he was taking his disabled uncle fishing and had no idea that he had done anything wrong. We shook hands and went on our respective ways. The next day, I rode back up to where he had entered to trail in order to see things from his point of view.
Until this summer, there had been wheel stops where the parking lot meets the River Trail at this location. I have observed several people parking at the pier over the summer, so I got in touch with a NLR Parks employee at that time. I was told that park officials decided that it was too much trouble to deal with the stops when trail maintenance was required so they would not be replaced. 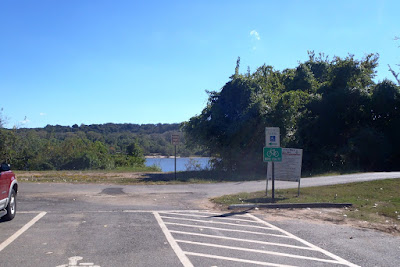 At Burns Park, this signage could read to be directing drivers on to the trail to access handicapped parking and the fishing pier, as had been the case with my new acquaintance. In the absence of a physical barrier here, some clear signage is called for.

Entitled Yachtsmen?? Is It Possible?

I've long expressed my concerns about the potential for conflict in the area of the Rockwater Marina, that happened during a recent event there. Several cars were parked on the River Trail at the intersection with Rockwater Blvd, and cyclists reportedly were forced to dismount and walk their bikes around the parked cars. This is a situation that I only expect to get worse as residents move into the homes being built and as the marina fills more slips. There are many more slips than there are parking places, and folks are going to naturally want to park right at the top of the ramp, which happens to be on the River Trail. This needs to be addressed sooner rather than later. Rockwater Marina has 64 slips, 32 for long-term rental and 34 for transient boaters. I doubt that their small parking lot will accommodate their needs on a busy weekend or for events, but parking is allowed on the "designated shoulder", aka "the bike lanes", on Rockwater Blvd.  These were purposely not designated as bike lanes so that parking could be allowed; however, people will go to great lengths to avoid walking 50 yards to their car. Observe any Walmart parking lot. 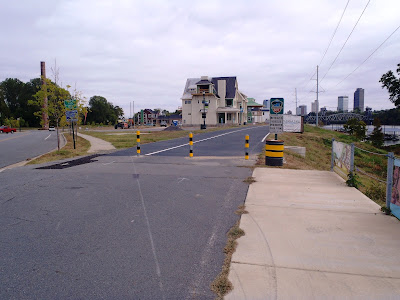 This is a frequent parking spot for people accessing the Rockwater Marina, but it is usually one vehicle on the concrete sidewalk. A couple of Saturdays ago, vehicles were parked across the width of the trail.  There is nothing but good judgement to tell them that the practice is prohibited.

Give peace a chance.

While I tend to be very protective of the ART and the safety of trail users, I feel compelled to give a pass to the offenders described above. In both areas, that of the Fishing Pier and at Rockwater Marina, there is nothing telling visitors not to park on the trail and, near the pier, there is signage that could be read to be directing people to use the trail to access illegal parking. Off to the left side of the area in the photo top photo is a small sign prohibiting motorized vehicles, but it is not in the line-of-sight of folks approaching the trail from the lot.

The NLR Bike Friendly Community Committee, of which I am a member, has been a good conduit for getting things like this corrected, but we have not met in months. And, as a few of you have noticed, my rabble rousing in this space has slowed. That said, I'll see if we can spur some action before spring rolls back around.

Looking good
I will compliment the good taste of seemingly all of the new homes being built at Rockwater. I've enjoyed watching them take shape and hope that the resulting community is as cool and funky as the architecture.

Angry Dave's is now carrying the Santa Cruz line and hosted a bike demo on a recent Saturday. Diane wanted to try out a couple bikes in their women's-specific Juliana line, and I checked out a new 5010. Diane rides a 26" Cannondale and was trying to decide on whether she wanted to replace it with a 27.5 or a 29er. I liked the 5010 29er, but I couldn't push it hard enough to appreciate its longer travel over that of my Niner Jet 9, but appreciated the opportunity to rode something different. If nothing else, it sold me on dropper seat posts. Diane liked something about both of the bikes she rode, so couldn't decide on either. 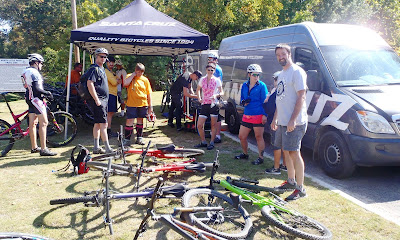 Dave and the Santa Cruz rep stayed busy all day with a steady stream of riders eager to try out bikes. 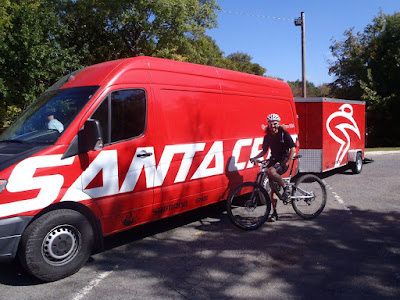 Chad Cradle was having a load of fun riding some new Santa Cruz mountain  bikes.

Unlike me, Chad could really appreciate the merits of the Santa Cruz 5010. The fact is that he's a real mountain biker and I'm a roadie who sometimes hides in the woods in the winter months. My single track skills go from beginner to novice each fall. I think that, so far, I've had one year of mountain bike experience eight times.

Bike demos are held along the trail fairly often, and some are better publicized than others. They are always a great opportunity to get a hands-on feel for current technology or to try out a bike that you may have been lusting for. Remember these simple truths:
1) You always need another bike.
2) Your next bike will likely be more expensive than your last one.

We don't need no stink in' no parking signs on our yacht parking lot! We got valuable cargo of rum and ale that needs to sail.

In this day and age of so many people packing you are brave or foolish to confront someone like you did. Back when I started riding 9 years ago I used to see NLR PD on bikes regularly now I don't. I think it would be a good thing for them to be out there and also for signs to be posted on how to get hold of them other than 911.