I've posted a couple of articles about the conception and development  of the Southeast Trail segment of the Arkansas River Trail System. Now, it is time to make it official with dedication ceremonies taking place at Dassault Falcon Jet . 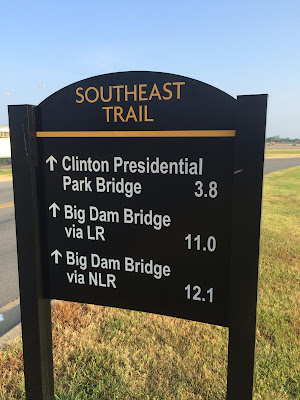 
This press release from Lynn Bell of Metroplan:

Metroplan Announces the dedication of the southeast trail

The 13-mile bicycle trail is an addition to the Arkansas River Trail System and its 88-mile Grand Loop, bringing the total miles of trails and bike routes in the system to well over 100. The trail offers flat terrain, low vehicular traffic, and diverse landscapes of farmland, industry and the Arkansas River.

Partners and supporters of the project include:

Metroplan is the federally designated metropolitan planning organization for the four-county region of Faulkner, Lonoke, Pulaski and Saline counties. It is a voluntary association of local governments that has operated since 1955.


Much credit for this project goes to Rob Stephens, who chairs the Arkansas River Trail Task Force under the auspices of Metroplan. Rob is an energetic volunteer whose quiet, behind-the-scenes efforts continue to produce results from which our community benefits.
Posted by JBar at 11:54 AM

The link to the maps doesn't show anything but the River Trail, it doesn't like this trail has been added yet.

"This newly designated bike route..." "The 13-mile bicycle trail is an addition to..." Am I missing something? Has a single bucket of asphalt been poured? Painting sharrows on the pavement and erecting a few street signs proclaiming this to be a bicycle trail is just putting lipstick on a pig. Will there at least be a commitment to occasionally run a street sweeper over the shoulders (in the few places that shoulders exist) to reduce the debris?

someone, please add it to the main page http://arkansasrivertrail.org/maps/