The 2nd Annual Little Rock Gran Fondo went off without a hitch on Saturday, in spite of consistently gloomy weather forecasts and near-daily heavy rains in the preceding weeks that gave those forecasts great credibility. Overnight rain gave way to light showers which faded as the 8:00-AM start approached, and, unlike last year when riders were left standing in the rain awaiting a live TV roll-out, only to be delayed again at a nearby rail crossing, the ride started on time and the pack rode smoothly out of town. 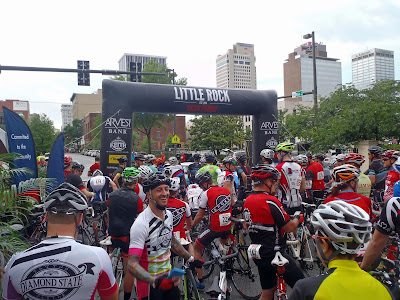 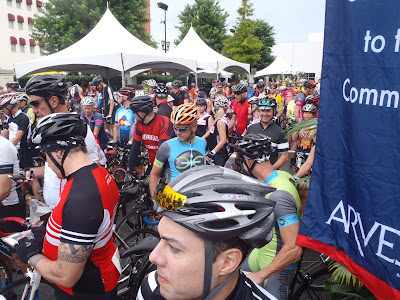 The promoters skipped the champagne toast that opened last year's inaugural event. Better weather and improved logistics  made for a better start,

When the promoters laid out the 68-mile course last year, one goal was for it to be distinct from other event rides in the area, and they succeeded. Where rides like the BDB100 and MS150  are defined by some notable climbs, and others, such as the CARTI Tour de Rock and the Wampoo Roadeo take place on the pancake flat prairie, the Gran Fondo starts out with a steady diet of rolling hills, then transitions into flat roads about a third of the way through the ride. Many riders are slightly taken aback by the 2000-plus feet of elevation gain and loss that takes place without encountering a single identifiable climb. While the flat roads on the return leg are welcome, the last few miles around the Clinton National Airport are almost always windy and can punish tired legs. One somewhat snarky rider made the comment that Parks and Tourism had to be involved in promoting a ride that toured the airport, an industrial park, a correctional institute and a waste-water treatment facility, but most of the ride cruised through sparsely populated forested areas.
The rest stops were spaced at 23-mile intervals, evenly splitting the mileage, and were well-staffed with volunteers and well-stocked with food and drink. A Mavic support vehicle patrolled the route, complete with the ubiquitous Mavic yellow bikes filling the roof racks, added practical help for those who needed it, and a pro-tour air for those of us who just got a kick out if it prowling our local ride.

Post-party
The post-ride party was also an improved version of last year's event. Lost Forty was on hand passing out canned pilsner (and Pale Ale to those who knew to ask) 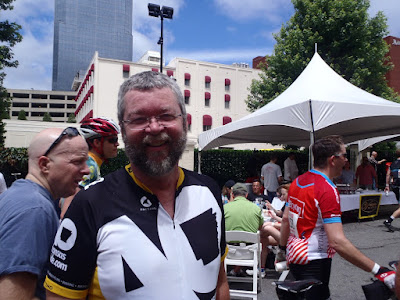 My friend Joe Jacobs of Arkansas Outside greeted me at the finish. "I just rode 40-miles instead of 68, but I've already had 3 beers, and so has your wife. I win." 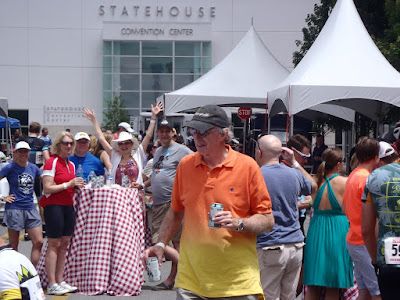 Actually, Diane had just started down the path to 3 beers, but she was enjoying the day and her exuberance is apparent. 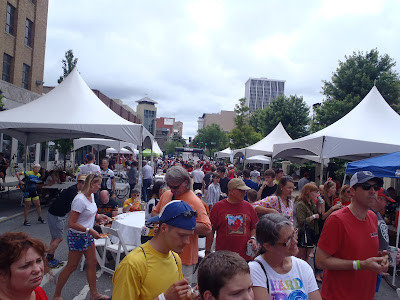 
Several of Little Rock's best restaurants were turning out first-rate fare, and Loblolly Creamery was on hand with delicious hand made ice cream. The food at the Gran Fondo is definitely a step above normal group ride fixings. OK, two steps.

Dunk The Mayor
Mayor Mark Stodola was on hand to help raise money for Ron King's Recycled Bikes For Kids. He sportingly subjected himself to 30-minutes in the dunking booth, and I took a turn. As I told the mayor, I've taken a few shots at him over the years, but this was the best, yet! 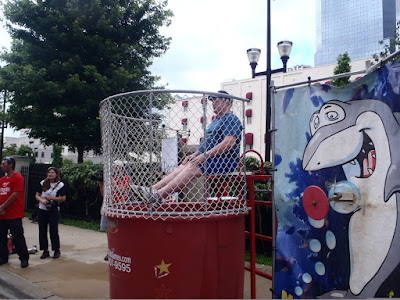 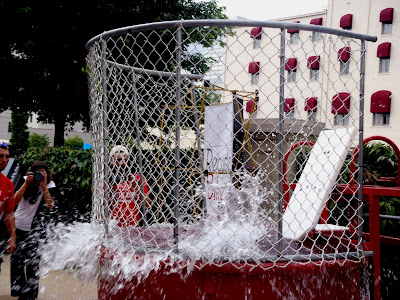 ..and the pitcher delivers!

While I have expressed my frustration with the lack of progress by the City of Little Rock on many cycling issues, Mayor Stodala has proven over the years that he is supportive of the cycling community. He is in a difficult position due to his limited powers as mayor and the relative strength of some of the state's major political players whose interests lie in the path of progress on the cycling/pedestrian front. And, then there is  the speed bump that is city director Erma Hendrix, who is against all things 'bike". I say that to make clear that there was no malice involved as I wound up and delivered a perfect strike on my second pitch.
Thank-you Mark, for playing the game and for being a very good sport.

More winners
As things wound down, the prize drawings started. When you hear "prize drawings" at these events, you expect water bottles, maybe some lube, a T-shirt, or a multi-tool. Once again, the promoters and sponsors went big. The prize list included a Garmin 510 bundles, Mavic tires and a massage package, a 1300.00 Mavic carbone wheel set, and the grand prize of a $3000.00 Cannondale frameset. 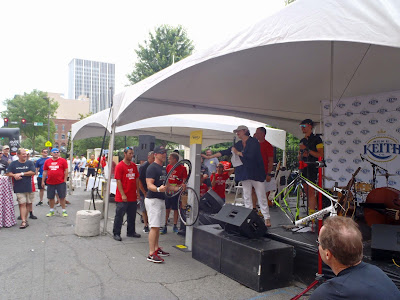 The prizes were big! 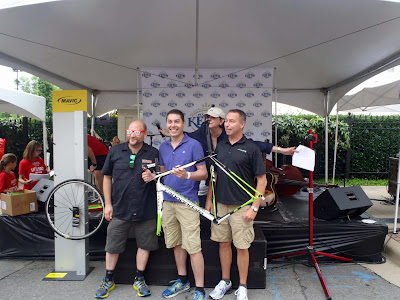 "It shoulda' been me", was a common refrain when the frame winner was announced.

Once again, Michael Chaffin and Tony Karklins, along with Jason Warren of title sponsor Arvest Bank and Spokes owner Mat Seelinger, raised the bar on cycling events for our area. As I congratulated Michael on the job well-done and improvements over last year's ride, he responded in his usual low key manner, "We're not supposed to get worse." Great job guys.