Along The Trail: Photo Ops, BDB Flags Return, and More On Detours

Postcard Cut-Outs At The Bridges
The Little Rock Convention and Visitors Bureau added some touches of class to the Big Dam Bridge, Junction Bridge, and the Clinton Presidential Center with the addition of postcard frames so that tourists could pose at the big city attractions for their friends back in the sticks. 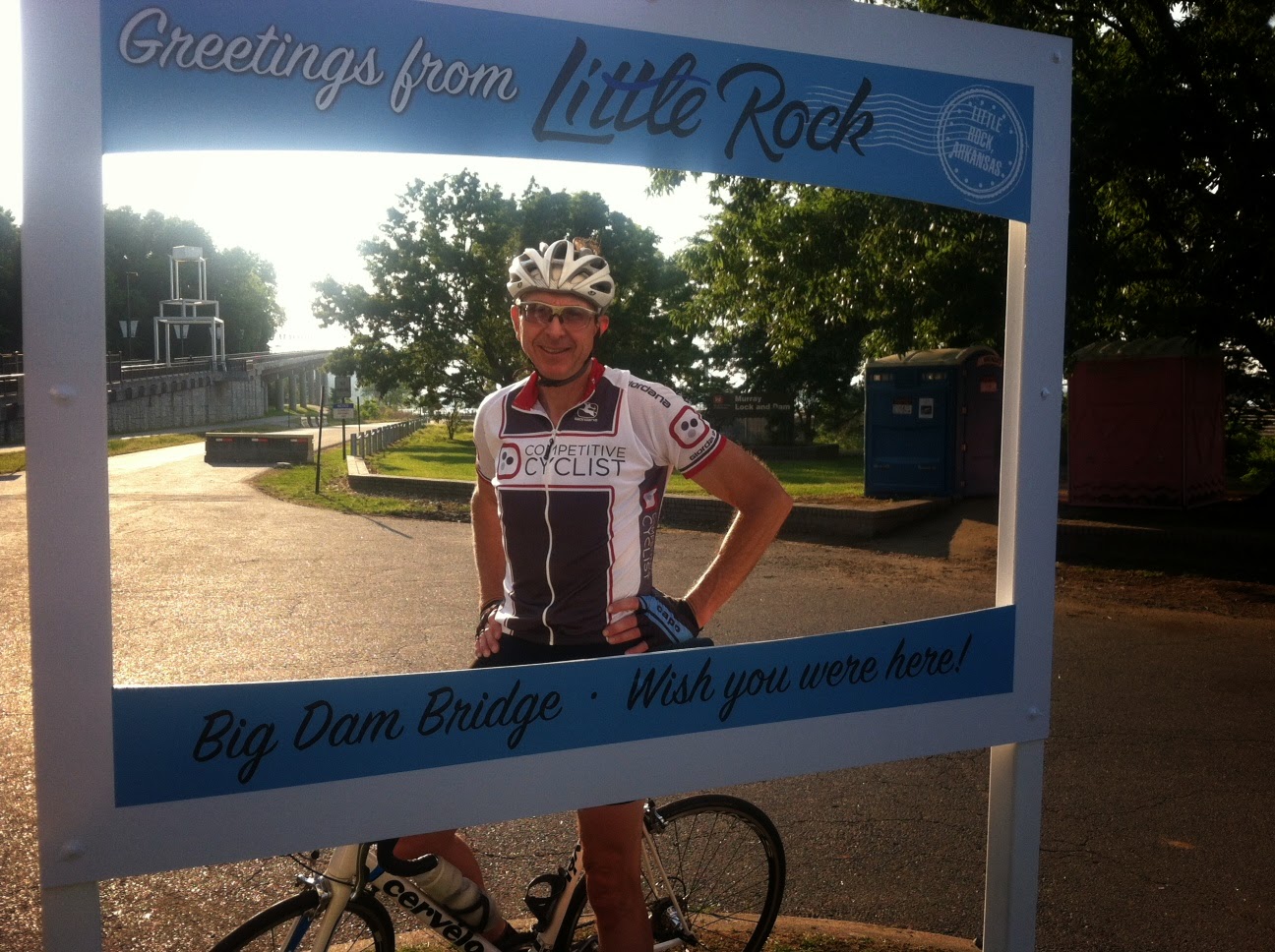 The folks back home in Camden will be impressed! Sam Ledbetter was among the first posers, as the paint was still sticky on the sign. 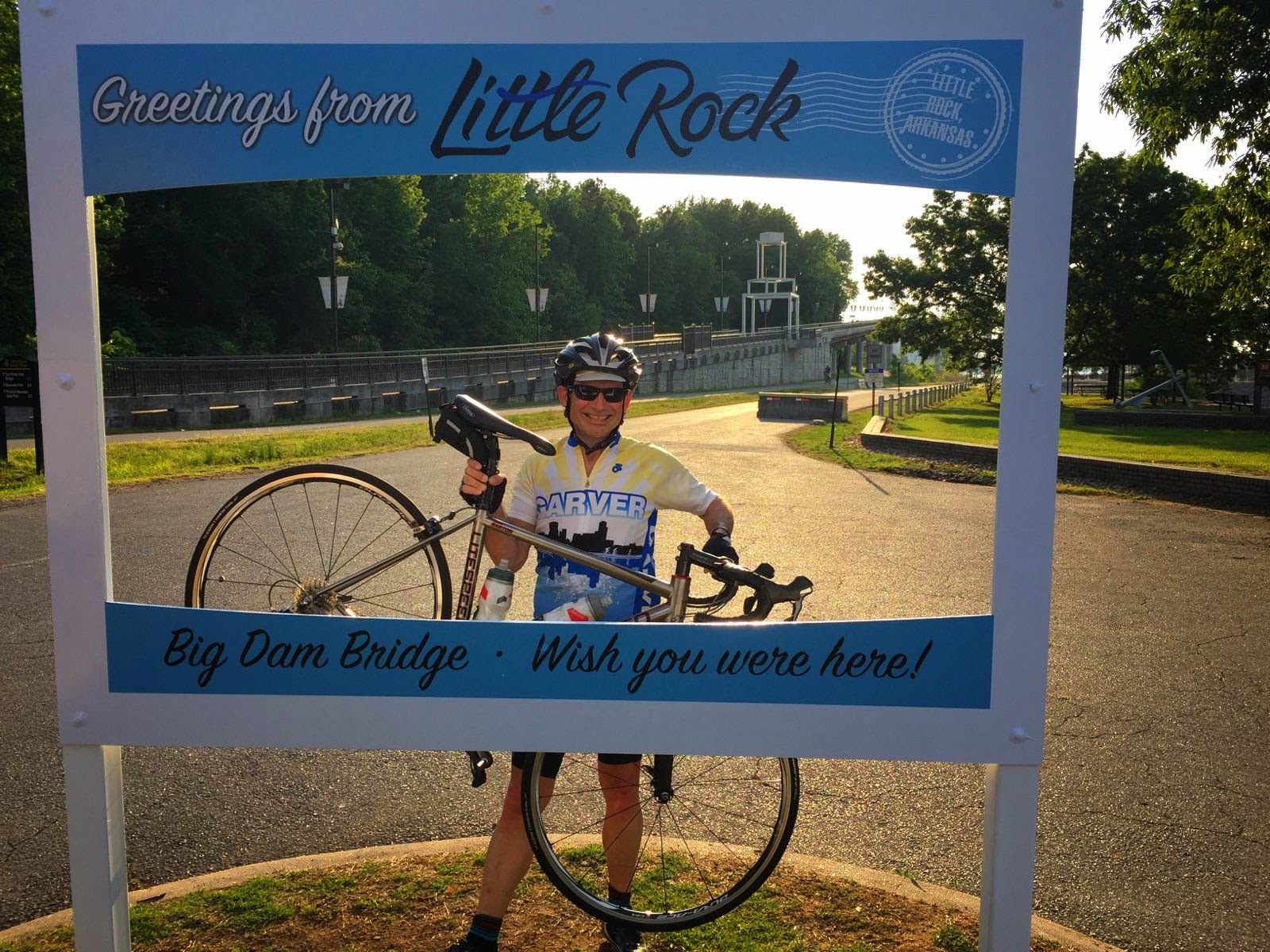 Not to be outdone, I, too, wanted my own picture postcard. 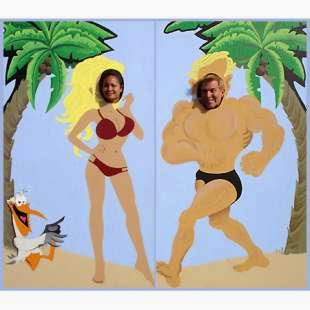 It is my understanding that if the postcard signs prove popular, that more photo options will be added  at key locations around the city. This one will be a hit at Murray Park with its current population of pelicans.

OK, I'm on a bit of a sarcasm roll. I'm sure that the signs will help fill the diners and tourist courts.

Flags Return to The BDB 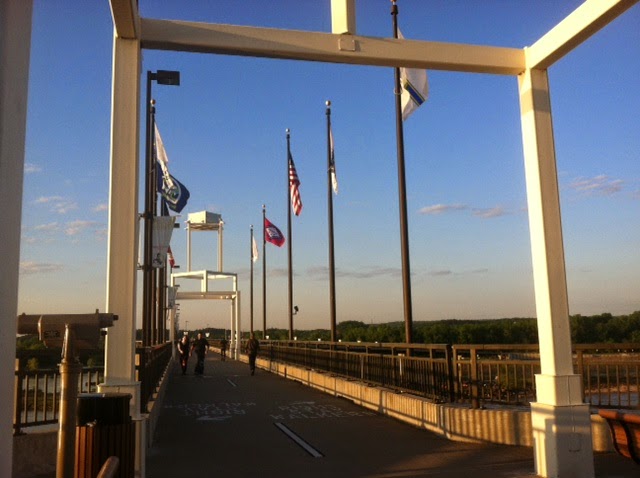 After being removed during the course of lighting work on the BDB some time ago, the flags made a return to the BDB a few weeks ago. Most needed to be replaced and the fresh banners are back to doing duty as wind indicators for alert cyclists.

There have apparently been problems with pedestrians and riders entering the construction zone at the Broadway Bridge site on the Little Rock side---to the point that officials have threatened to post officers there to issue citations. From the east, the site seems pretty secure, so I doubt that many recreational riders are going to the trouble to pass the barriers. By nature, we want to get the best result for the least effort and that generally excludes climbing fences, lifting barriers, or getting our nice shoes dirty. 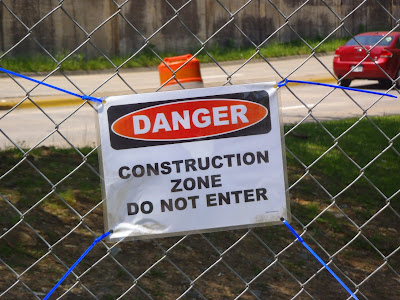 The detour on the Little Rock side is certainly problematic. It was and remains a challenge to come up with a viable route. The current detour is marked only for those approaching the trail from the Clinton Park Bridge, and the route sucks for cyclists due to trolley tracks, sparse signage, and traffic signals that seemed to be red at every intersection on my Sunday afternoon scouting trip. 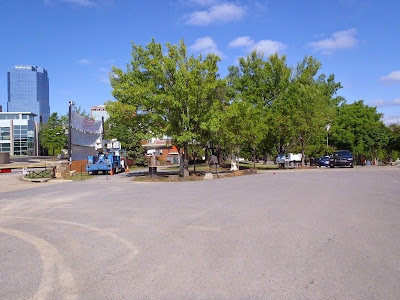 Riders departing from the River Market and attempting to follow the River Trail map are given no indication that they are headed to a dead end. A ride along the "Medical Mile" ends abruptly at a chain link fence and a lot of warning signs, but nothing to direct riders to the detour, or anywhere else for that matter. 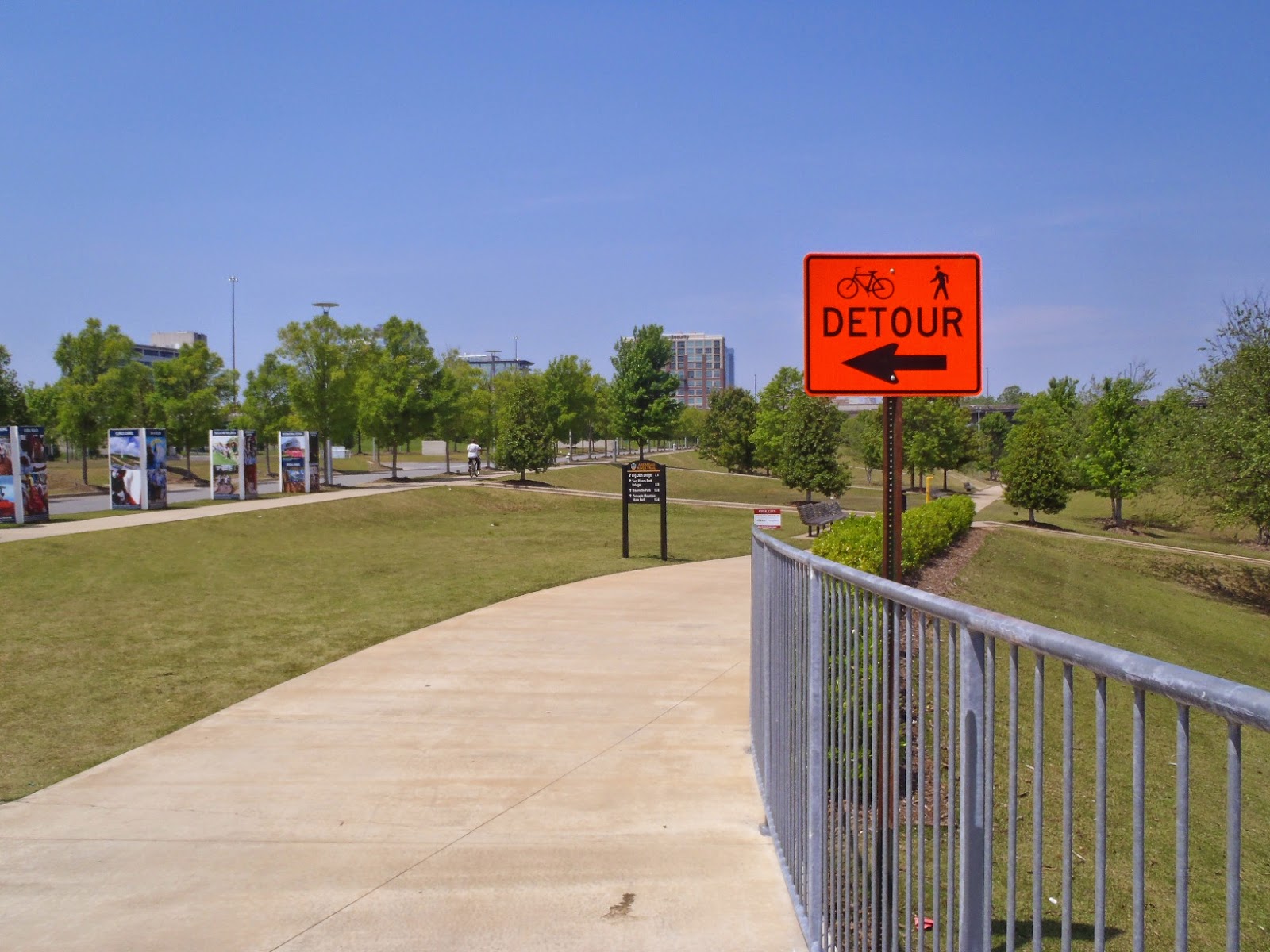 Riders coming off of the Clinton Park Bridge get a detour sign. 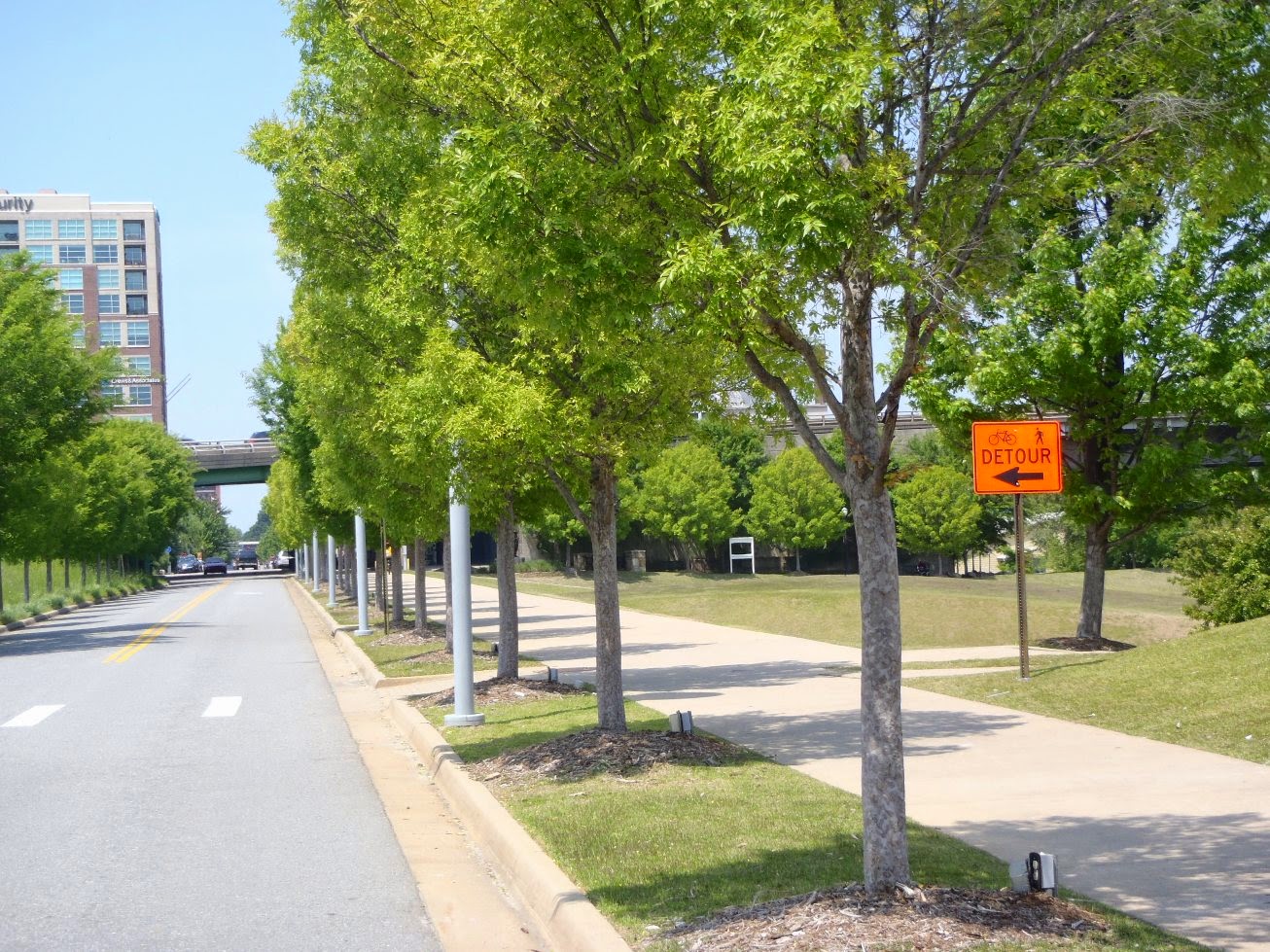 They are then directed along a sidewalk to 3rd Street. 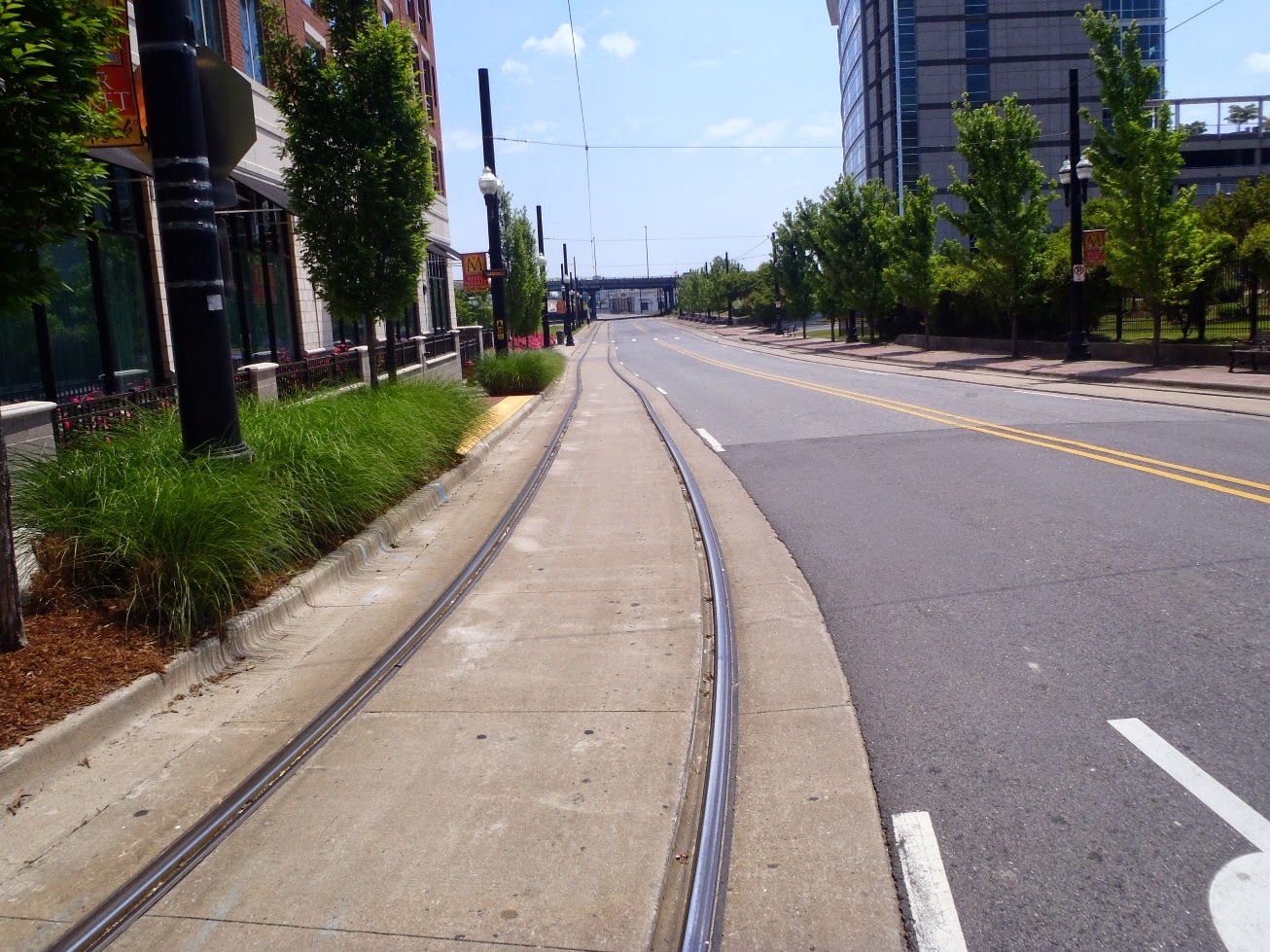 Facing back to the east along the detour. Riders face an often uncomfortable choice of riding in the left traffic lane or along the trolley tracks. 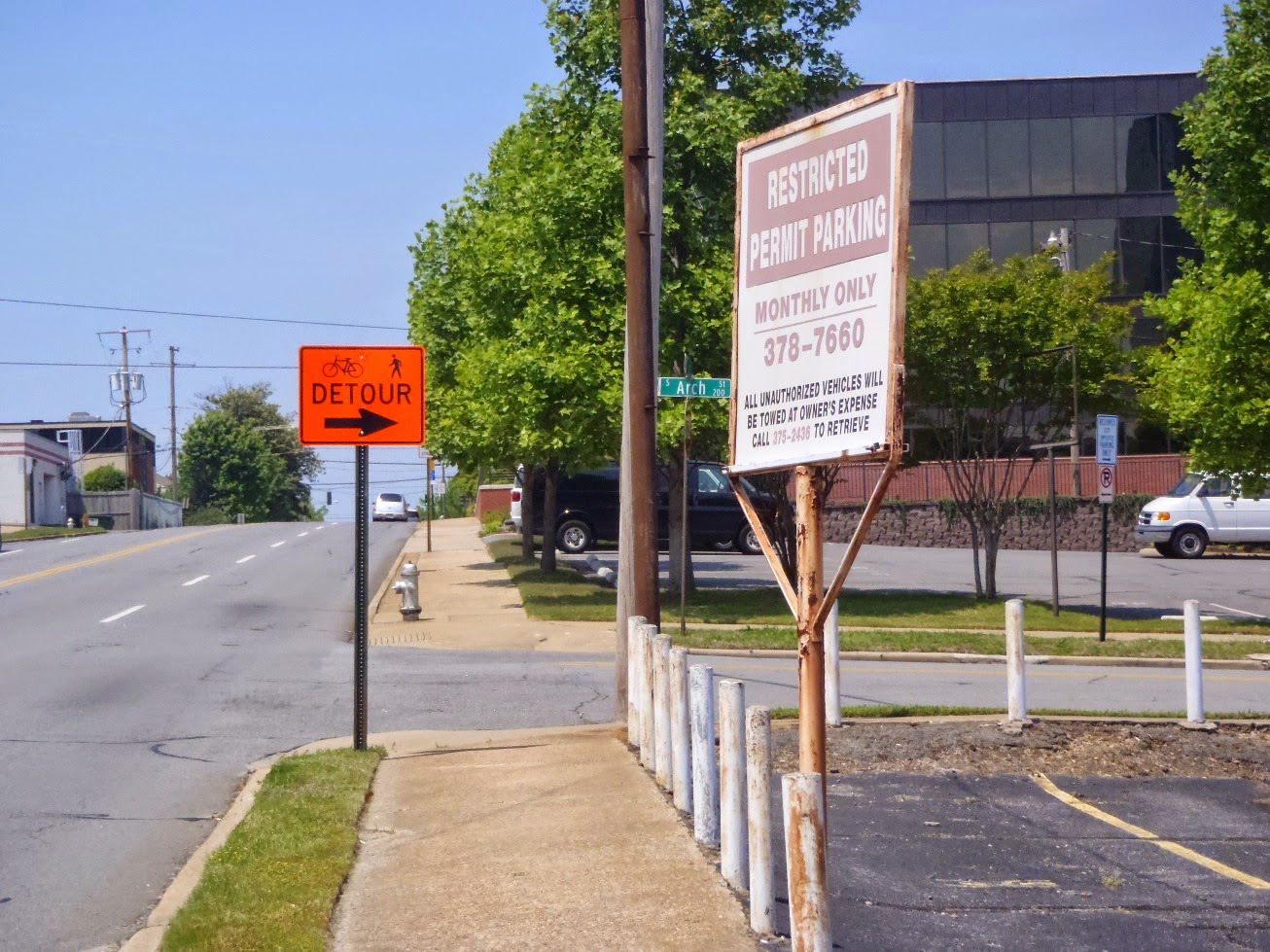 After several blocks and almost as many red lights, the detour turns back north toward LaHarpe on Arch Street. The intrepid souls who have made it this far will then get to navigate the more permanent maze of a detour near Dillard's HQ. We like our bike tourists to be tough and determined.


In all fairness, there are few viable options on the south side of the river, and things will only get much worse when the Broadway Bridge closes next summer. In the meantime, the City could do a much better job with signage.
Oh, yeah, and keep your skinny little tires out of those construction zones. Seriously.

Did I tell you about the completed Razorback Greenway Trail?

Oh, yes, that mythical place where government, private businesses, and multiple communities were able to plan, finance, and construct a comprehensive interconnected trail system that serves both as a major visitor attraction and as a transportation resource?
I've heard rumors of such a thing, but wrote it off as the fantasy of dreamers. A lot like a reality based version of closing-the-loop.

How can it be so obvious to most people yet so oblivious to others. I just don't get it.

This comment is not on topic, but I need to get it out. I rode from the Rebsamen Park Golf Course to and through Two Rivers Park this morning. I was riding west on the part of the road that goes through the swampy area west of the bridge and east of the open fields. I saw a big frog. Fun! As I turned to the left to head toward the bathroom, I saw a blue bird. As I approach the bridge over the swamp just north of the bathroom, a bobcat (or wildcat) ran across the road from west to east. I have seen bobcats (wildcats) cross Rebsamen Park Road three times, but this is the first one I've seen in Two Rivers.