A milestone was recently reached in the effort to develop the Southwest Trail, which would serve cyclists and hikers with 67-mile route between Little Rock and Hot Springs, connecting communities all along the way.

A Memorandum of Understanding was signed on December 8 formalizing the agreement between the counties and municipalities along the SW Trail route to cooperate in the development and maintenance the trail.

I reported on the press conference announcing the project  last October, and most of the details remain as announced at that time. Much of the route was intended to follow an abandoned Rock Island/UP rail right-of-way. Title to much of that property reverted to the original landowners upon abandonment by the railroad, so identifying current ownership and re-acquiring an easement has been a challenge. It is my understanding that the AHTD has agreed to provide an easement along the Highway 70 right-of-way in Garland County to allow for trail construction. This cooperation would make the trail development much easier than having to find and negotiate with land owners along the rail line, some of whom were willing and some of whom had no interest in allowing an easement for the trail. 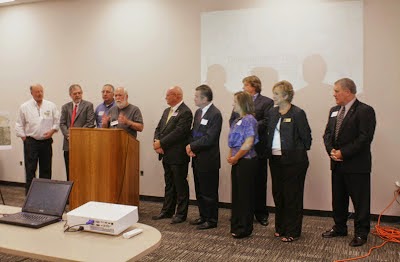 Judge Villines and other leaders at the press conference last October.


An excerpt from the document:

A.       PURPOSE:
The purpose of this MOU is to continue to develop and expand a framework of cooperation between the aforementioned Cities and Counties to develop mutually beneficial programs, projects and bicycling activities at the local and regional levels. These programs, projects and activities comprise part of the proposed Southwest Trail's multiple use missions and to serve the public.
B         STATEMENT OF MUTUAL BENEFIT AND INTERESTS:
These programs, projects and activity benefits include an active partnership within the three-county and eight city area to plan, construct and maintain the Southwest Trail as a multi-use trail, as well as to serve local publics through the patrol of such trails. The benefits for the cities and counties through this cooperative effort are provided through the strategic planning of trail development and public service to all trail users. The mutual benefit for all 11 jurisdictions is to provide a public service to maintain and patrol designated trails throughout the three-county region.

There is a large and growing market for what I will call "participatory tourism". Whereas in the past many people traveled simply to see things that they had never seen before, we are so immersed in media that when we travel, many of us want to do something. We want destinations that allow us to pedal, paddle, climb, hike, ski, or run. Cycling is a huge part of that trend, as almost anybody can ride a bike. Bicycling tourism is among the fastest growing segments of the tourism industry, as evidenced in the fact that the River Trail brings people from all over the region just to ride. A trail to Hot Springs could expand the experience into an overnight or multi-day adventure that could include hotels, B&B stays, and camping along the way. Trail are also proven to increase property values in the areas that they serve. More tourism and increased property values mean more revenues.
Amenities like our trails systems also make it easier to recruit educated young people to the area. There is a reason that images of the Arkansas River Trail appear in almost every example of media representations of Central Arkansas.

The MOU is not a contract to construct the trail, but serves as a framework for cooperation. Judge Villines estimated last year that completion of the project would cost $20-25 million in public and private investment, and that it would likely take 5 to 10 years. Those figures were Villines' best guess at the time.
One thing that is certain is that a development of this magnitude has to start with a plan. Once a plan is in place, then the search begins for funding.
In the current political climate, many alternative transportation advocates are less than optimistic, but opportunities will arise and it pays to be ready. We need only to look at the Two Rivers Park Bridge to see what can happen when a plan is in place as funding becomes available.
Some of the community leaders involved in the Southwest Trail project are conservatives of the "limited government" persuasion, but they recognize a good thing for their communities. I hope that these folks have some of the same tenacity demonstrated over the years by former NLR Mayor Pat Hays and Pulaski County Judge Buddy Villines.
The Southwest Trail can be a very good thing for Arkansas. Let's build it.

Is the radio interview posted online anywhere? I missed it this morning.