We all have memories from our childhood days of doing something deemed unwise by our closed-minded parents. My Mom sometimes just shook her head when I told her I had jumped off of a high bluff at the rock quarry or had done something else questionable with a buddy because, " he dared me" (or I dared him), but she usually took my survival as an indicator that it wasn't that bad, though I would get the standard, "If he dared you to jump off of the roof, would you do that?!"  By this point in the conversation, I was usually wise enough not to shoot back, "how high is the roof?", and settled for a contrite, "No, ma'am".
The Challenge
All of that was simply to lay a foundation for explaining why I found myself riding the River Trail toward the Big Dam Bridge at 6:15 on the past Tuesday morning, which was the coldest day in the past few decades. I've got a neighbor buddy, who prefers to remain anonymous, with whom I've embarked on some rides in questionable conditions. On a recent cold ride we were reminiscing about our coldest ride to date, which took place on a 17-degree day after we had been home-bound for a week due to an ice storm. That ride was not only cold, but was marked by some sketchy bridge crossings and several detours  to avoid still-ice-covered hills. At some point in that conversation, he said, "We need to do a single-digit ride.', to which I thoughtfully responded, "OK".
You see, I am a bit of a student of local weather, being in the HVAC business and engaged in many outdoor sports, so I knew that I would get man-points for agreeing while also knowing that single-digit weather is seldom seen in Central Arkansas. Well, like betting against an inside straight, the odds were in my favor, but sometimes the cards fall to make that straight. With an arctic blast approaching, my phone rang over the past weekend and neighbor's voice asked, "Have you seen the weather forecast." Well, shit, here we go! Game on. 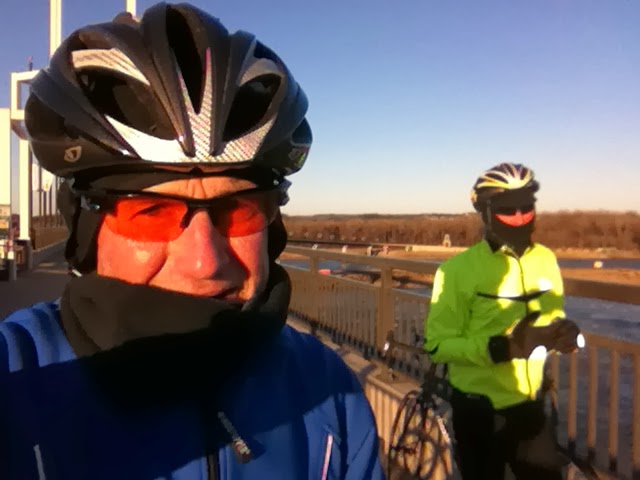 Monday evening shakedown. Sun on the horizon and 18 on the BDB, 14-degrees a short time later in the Icebox.

With temperatures already in the teens Monday evening, we decided to test our plan, so we rode out from Burns Park headed to the notorious Icebox trail section that lies between the BDB and Two Rivers Bridge. The area is shaded for most of the winter and is always a few degrees colder that anywhere else along the trail. We caught the last rays of sunshine while crossing the bridge but the wind was blowing 15-20 MPH so it was still harsh. My Garmin showed a low temperature of 14-degrees, so we had already hit a new low for us. We actually saw a couple of folks walking dogs or just strolling but no other riders.

Concerned: 5:00AM and a balmy 11 Degrees
It's usually coldest just before dawn, so with sunrise coming at 7:17, I was only a little concerned that my thermometer showed double-digits when I got up at 5:00. Depending on which forecast you put stock in, the predicted low was to be from 6 to 12 degrees. We left my house at 6:00AM and were on the bikes at about 6:15 at Burns Park. We were still reading above 10 at the BDB, but that marked the end of the warm spell. 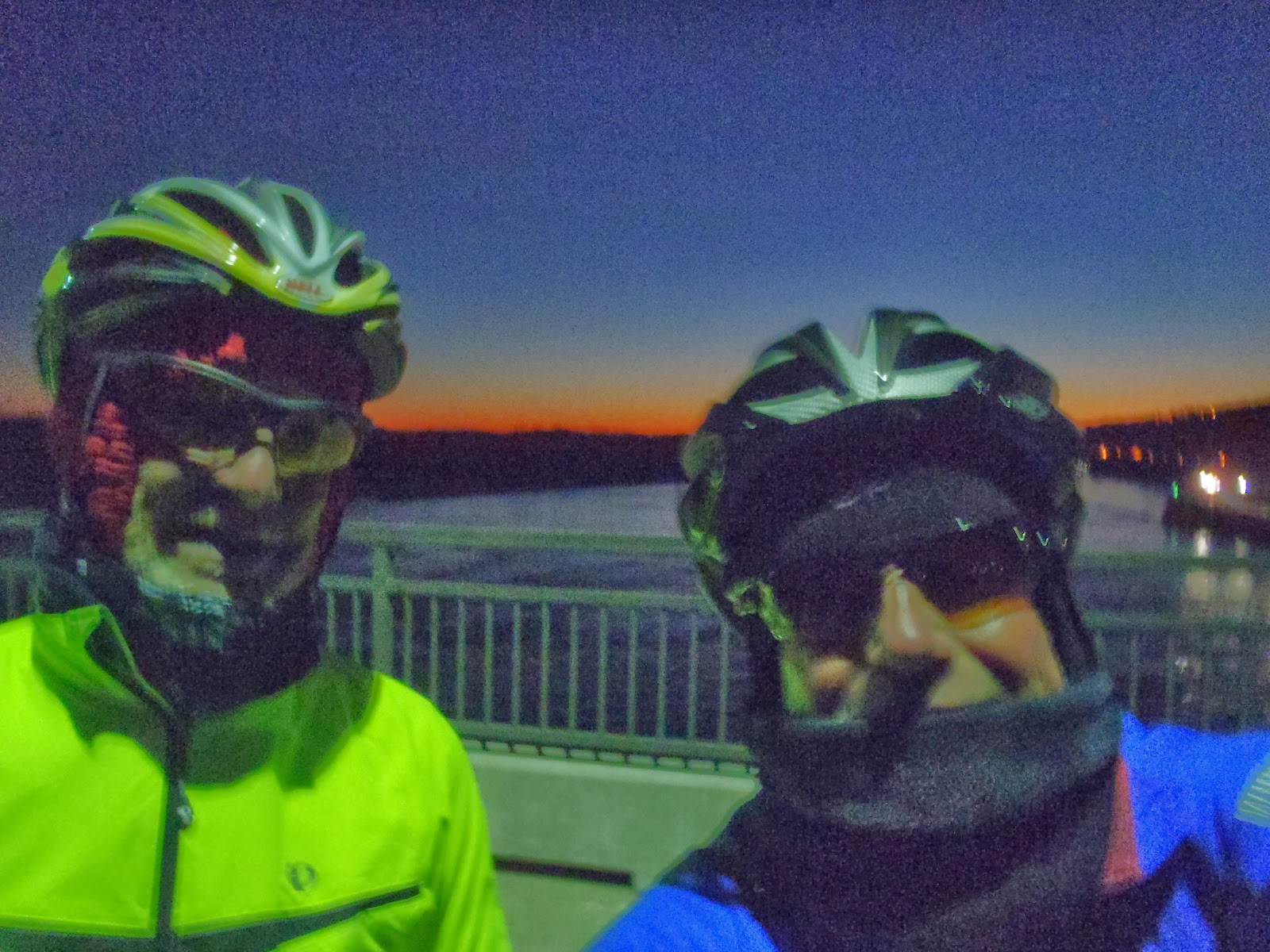 It was a beautiful clear morning for a ride. 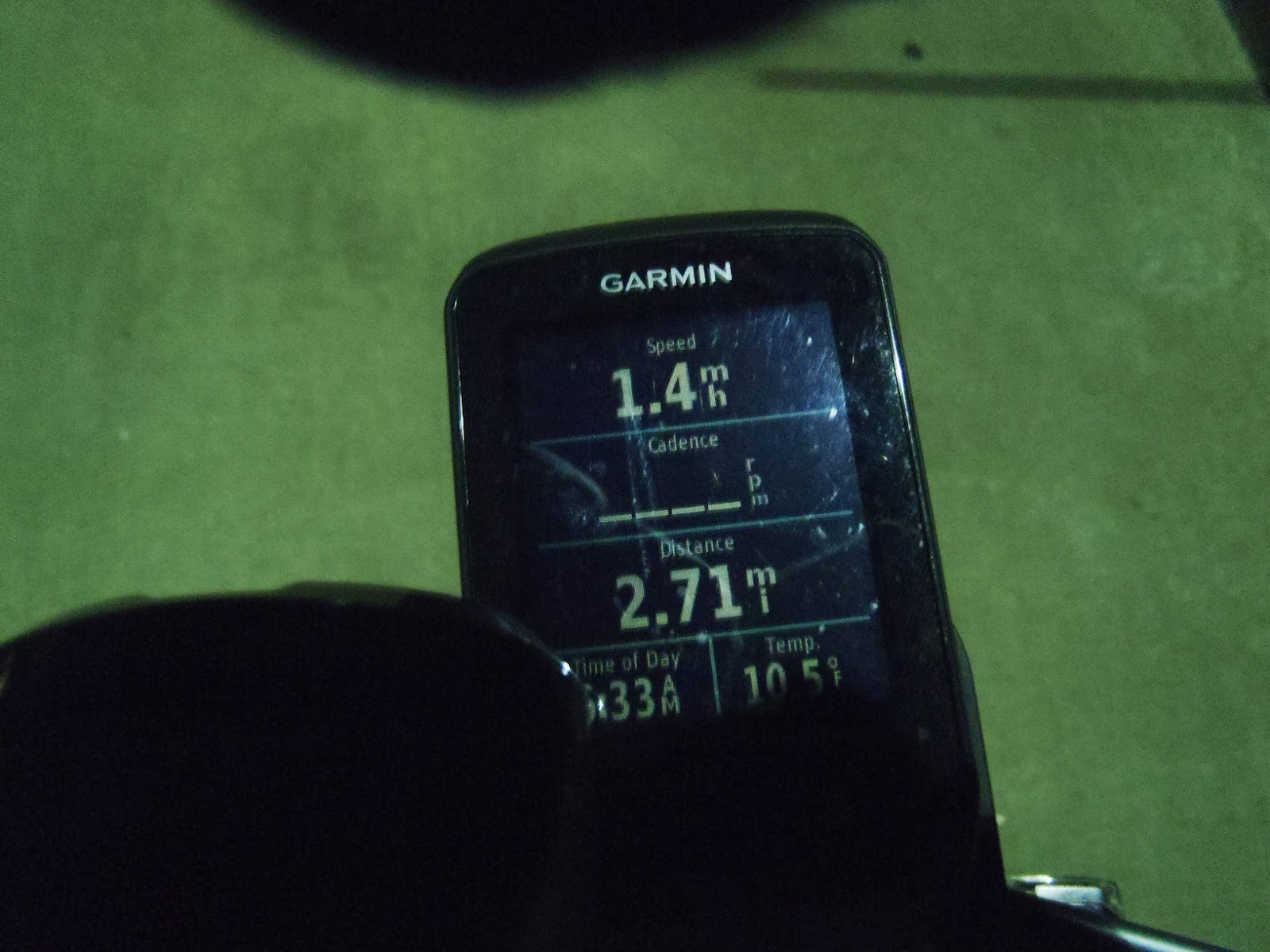 At 6:33 it was 10.5 on the BDB and we were on our way to the Icebox! I was moving to get into some light, hence the 1.4 MPH.
My Garmin graph showed 46.4 when I took my bike out of the cab of my truck and started recording. It was downhill from there!﻿
From the Garmin report:

The temperature remained around 7 degrees for the ride back to the truck. 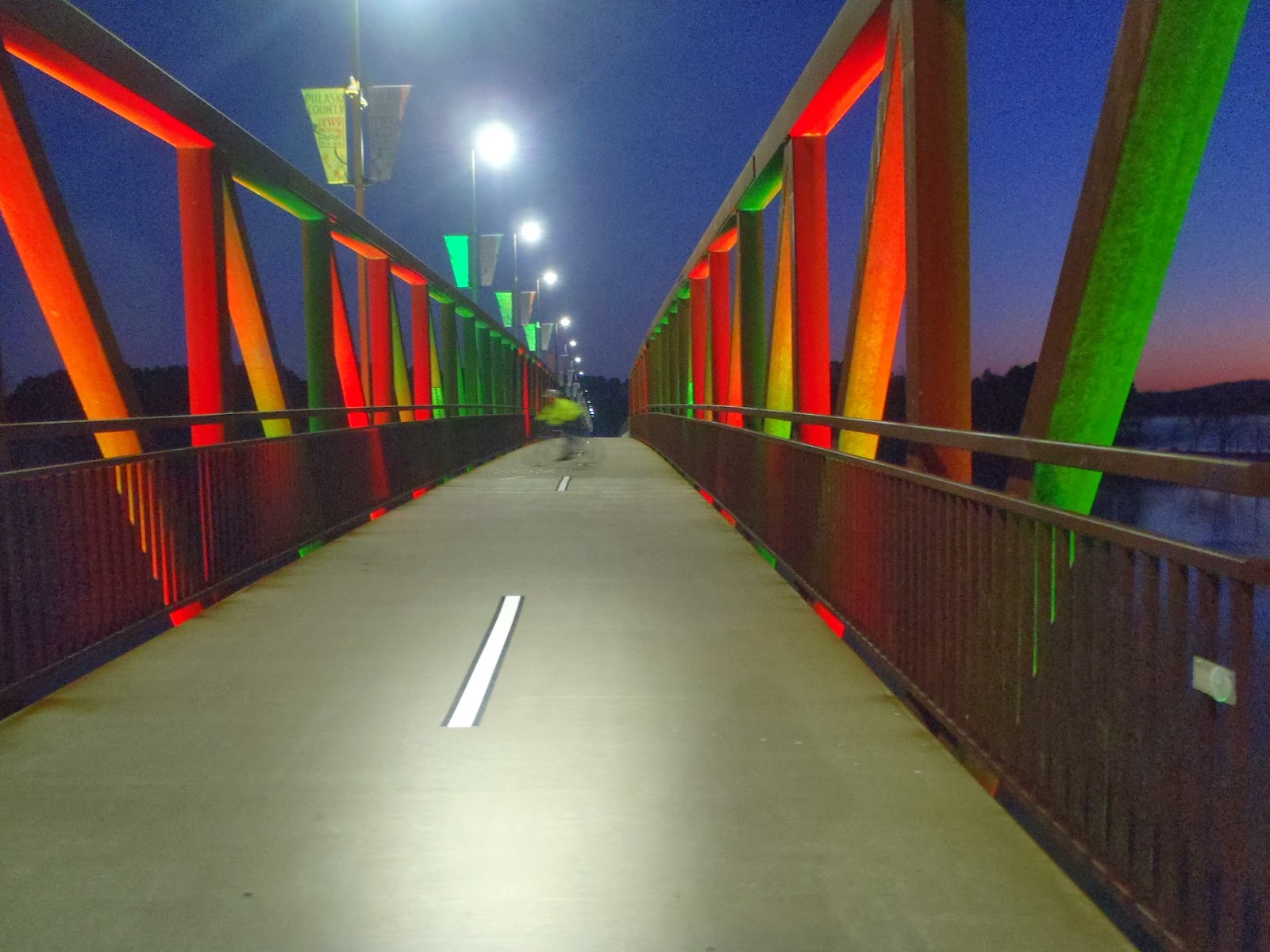 Playing in the lights on the Two Rivers Park Bridge. Crowds were not a problem. 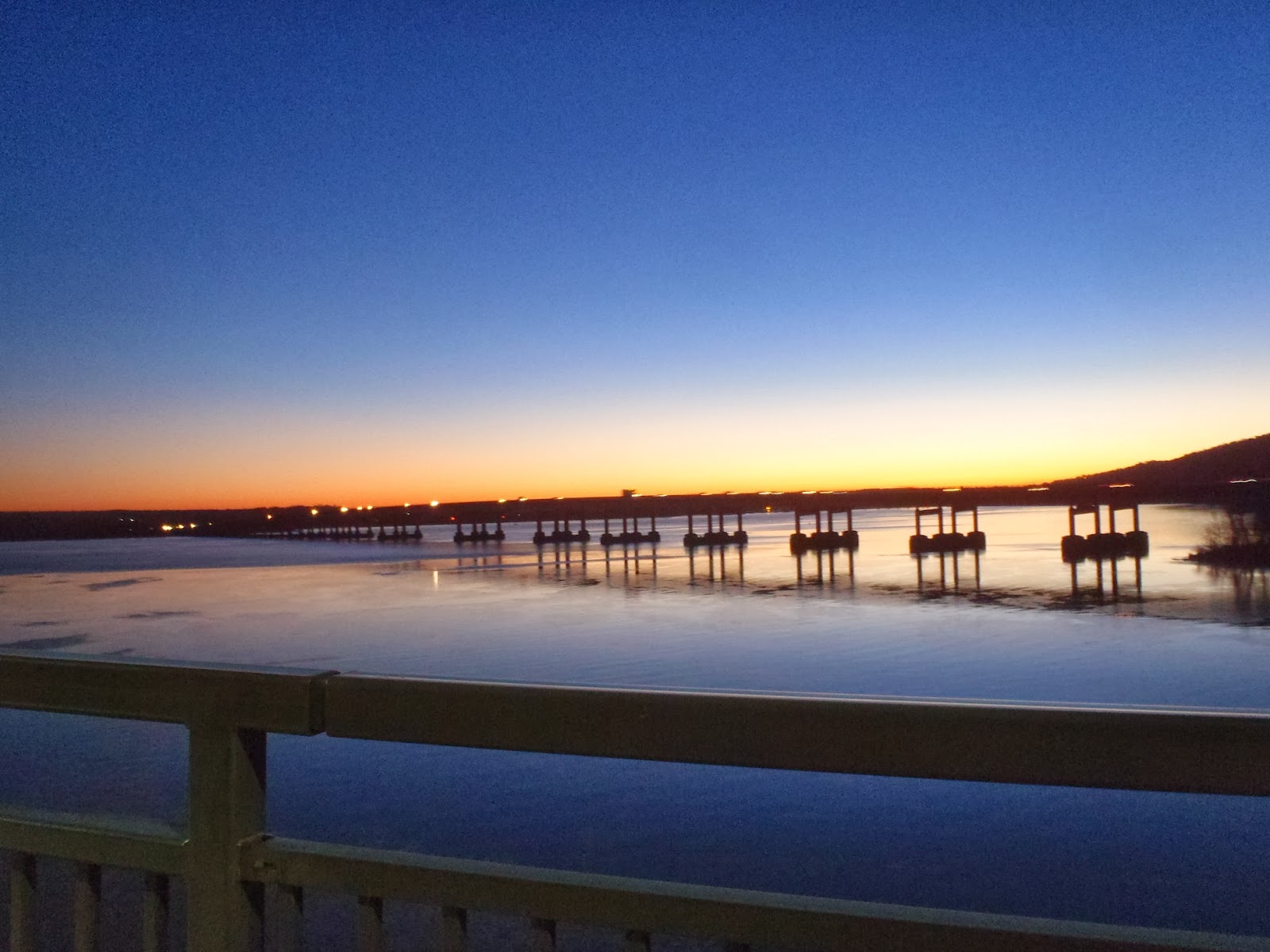 Traffic was building on I-430 as the day brightened.
There was really no purpose in this ride other than to be able to say we did it and to expand the range of conditions in which we have ridden. For me, the 6.8 degrees stands at one end of the scale and a 114 degree day anchors the other.
Our dress was not all that extreme compared to usual winter ride gear. I wore tights over knickers, knee socks, a light fleece in addition to the usual cold weather base layers under my jacket, ski gloves, and a more robust hat with ear flaps. Feet are always the weak link. I have some wool socks with cut-outs for cleats that I put over my shoes and under my shoe covers, but after an hour or so, the cold had crept in through the cleat area. That is easily solved with some $2.00 chemical toe warmers, but I'll save those for a longer exposure.
Commuters in Minneapolis would probably laugh at us, but we're southern boys! Neighbor boy is already talking about a ride at zero. The odds are against that happening, so I'm in!
Posted by JBar at 6:31 PM

Another great read my friend